It’s been a rough year. It’s gotten hard to keep track of all the stores and restaurants which have sadly had to close. But the Upper West Side was clearly shook when a handful of iconic businesses had to say goodbye.

These are places which shaped the UWS when they were here, and while you may not miss all of them, emotions were felt when they left us.

Here were the neighborhood’s biggest losses in 2020.

The Cuban Chinese restaurant on the corner of 78th and Broadway closed this summer. Cuban born Raphael Lee opened the restaurant in 1968, and his son Sam Lee took over in later years.

New York City’s oldest kosher deli, which first opened in 1927, closed for good in early March. The reaction to this closing was mixed. Many expressed sorrow, while others were ready to say goodbye, citing subpar food and service, especially in more recent years.

Soon after Fine & Schapiro closed, its former space at 138 West 72nd Street was leased to another kosher deli, Pastrami Queen, which also elicited a mixed reaction; a combination of excitement and disappointment over high prices.

After an attempted revival through crowdfunding, a temporary closing, and lots of friction between owner Chris Doeblin and his partner (as well as the landlord), the book store at 450 Columbus Avenue, between 81st and 82nd Streets, closed for good at the beginning of the year.

Book Culture was soon replaced by The Strand Bookstore, whose owner, Nancy Bass Wyden, also sought help from its customers as a result of lost revenues during the pandemic.

When the impact of the pandemic hit NYC, Wyden laid off the majority of her employees. This quickly lead to protests which were intensified when she publicly sought assistance.

The long-time diner recently closed its 72nd Street location after 41 years. While a GoFundMe campaign raised an impressive amount of money in a short period of time, it wasn’t enough to keep the diner’s doors open.

The retail chain announced in September that it would be closing all 13 of its stores, including the location on 66th and Broadway. Century 21 cited the last straw as a $175 million nonpayment from its insurance provider, and also filed for Chapter 11 bankruptcy to end things efficiently and maximize its asset value for stakeholders. The retailer first opened as a single downtown store in 1961.

A “for rent” sign was first spotted in the window of the 67th Street diner in late September. Old John’s had been around since the 1950s. As was the case for many restaurants, a GoFundMe campaign was launched – and easily exceeded its goals. But the amount raised wasn’t enough to keep them going in the face of the pandemic.

It’s been a rough year for this industry. Bank Street Bookstore permanently closed its store at 107th and Broadway at the end of August. With a previous location at 112th Street, Bank Street first opened in 1970.

The Chinese restaurant first opened in 1981, originally on 76th and Columbus. A year after opening it relocated to 77th and Amsterdam, where it remained as a regular spot for locals until this past April. While the restaurant had very mixed reviews, the announcement of its closure made it clear how many people will miss it.

The French restaurant had been on Columbus Avenue, between 70th and 71st Streets, for about 15 years until closing this year. It was during May that the owners announced they would be shutting its doors.

At the time, rumors of a potential resurrection began to circulate, with some indications that a former employee might be taking over the space. This turned out to be true; long-time manager Manny Colon opened Manny’s Bistro in the same space this October.

The good news is that this long-time UWS retailer is still in business; just not on the UWS. Long’s Bedding began to relocate to the Upper East Side in February, though it was announced they’d be doing so well before 2020. We’re happy that they’re still in business, but their relocation was certainly a loss to the neighborhood. Long’s Bedding operated on the Upper West Side for 108 years, and was on 72nd Street for 87 of those years. 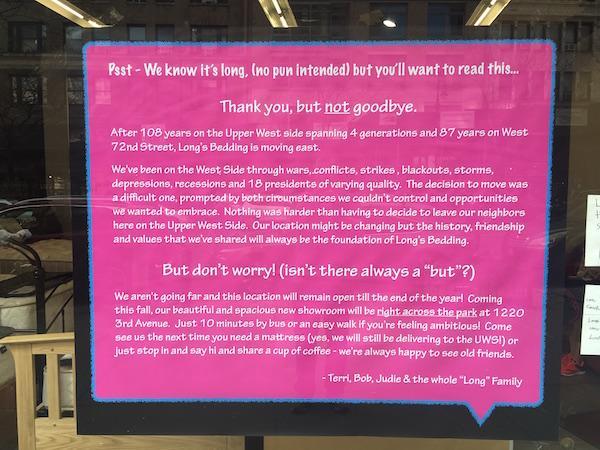 Well, things can only go up, and new places are still opening. So here’s to 2021.