Home
Real Estate
A Mysterious Building with a Storied Past 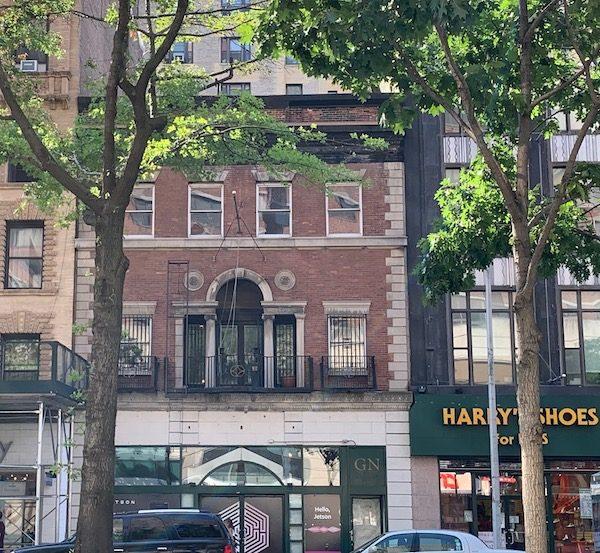 Have you ever wondered about the building next to Harry’s Shoes, between 83rd and 84th Streets on Broadway? 2307 Broadway – which used to be home to a Duane Reade and briefly housed a futuristic art gallery in early 2020 – is a beautiful old Georgian-inspired building that looks like a private mansion.

The building was constructed by architect Julis A. Schweinfurth in 1897, and the owner was Frederick Prentiss Forster. Forster was a Harvard-educated attorney turned Upper West Side real estate developer, who at the time had various nearby projects including his own mansion at 270 West 84th Street.

Tom Miller, who researched 2307 Broadway back in 2016, found that Schweinfurth built 2307 Broadway to look like a distinguished private mansion. Miller described how above the two stories of pink wash brick is trimmed white stone. There are splayed lintels and 18th century themed-windows. The focal point of the building is the Palladian balcony and columns with iron railings.

2307 Broadway was home to the West Side Republican Club.

And like many clubs of its time, it was the central hub for planning and campaigning for important political issues. It also served as a high-end social club. Miller discovered that the club was used for recreation as well, and had rooms for billiards, cards, and even a bowling alley. In 1900, the club had 450 members, and differentiated itself by allowing females to join. There were 250 female members in 1900. The organization’s website lists a current address of 50 West 72nd Street.

Many important events occurred at 2307 Broadway while it was the West Side Republican Club, including the incident in which John Sergeant Wise attacked William Randolph Hearst for trying to pit class against class to “promote his selfish ends,” as the Tribune wrote in 1906. In 1908, the president of the club had correctly predicted that William Taft would become his successor, making a huge banner that flew above the club just moments after he won the election. This banner was known as the first campaign flag to fly in New York.

Thanks to Miller’s research, we know the club was not only used for political purposes.

In 1913, the building was sold and the new owners gutted and converted the front of it into a storefront. An upscale women’s fur and dress shop, J. Fields, moved in. Dresses at the store cost $20, which would be $490 in today’s dollars. The upstairs of the building was leased to a dance school called Newberger, which was known for creating the “New Hawaiian Trot.”

Not too many years later, in 1917, the building was leased to Jorgenson & Sons, who ran a jewelry company and would purchase the building in 1921. They continued to run the shop and rented the upper floors to B’nai B’rith, one of the oldest Jewish organizations in the U.S.

OLDEST BUILDINGS ON THE UPPER WEST SIDE

In 1940, the West Side Republican Club returned to its original location. The building, still owned by Jorgenson & Sons, leased the space to them, and the storefront changed to a children’s shop. The building was later sold, and future commercial tenants would change many times over.

Selma Weiser – one of the co-founders of former UWS boutique Charivari – purchased the building in 1973, at which time the storefront was occupied by a grocery and drug store.

In 2014, Joel Schreiber’s Waterbridge Capital purchased the building for a little over $25 million, The Real Deal reported at the time.