It’s a little-known fact that 1 trains run express from 86th Street to 96th Street – sort of. If you look at a modern New York City subway map, you won’t see any stops along the Seventh Avenue IRT Line between 86th and 96th Streets, but that doesn’t mean the trains don’t skip a station. You may have noticed that the 10 blocks between stops is a slightly larger gap than normal, especially if you’ve ever been caught in the rain somewhere in the middle.

Planners at the Interborough Rapid Transit Company, or IRT, considered the distance and when the city’s first subway line opened on October 27, 1904, trains made an extra stop in the middle. The 91st Street subway station serviced the Upper West Side’s growing population for over 50 years, up until the day its exits were paved over, its lights turned off, and it was relegated to the darkness of the subway tunnel deep below Broadway.

Throughout the first half of the 20th century, the 91st Street station looked the same as the other stops along the 7th Avenue line. The platform had a gentle curve with painted columns running along the edge. The walls were tiled with mosaics spelling out the station name. The 91st Street station could accommodate 6-car trains, which was the norm among the city’s original subway stops that ran from City Hall to 145th Street. Despite its heavy traffic and traditional design, the station was missing one crucial element: room to grow.

READ MORE: The Upper West Side in the Mid-1940s

In the 1940s, subway platforms were lengthened along the Broadway-Seventh Avenue IRT line from 103rd Street to 239th Street. The new platforms could accommodate 10 cars and trains significantly longer than the 91st Street platform. When the decision was made to continue local service along the Seventh Avenue line and reroute express trains across the park to the Lenox Avenue IRT line, big changes had to be made. All stations south of 103rd Street had to be lengthened to fit 10 cars before the new routes could be implemented. For most stations, the change was fairly simple. Although the 96th Street stop needed to be largely rebuilt, its platform soon extended further south towards 91st Street. With the 86th Street platform stretching north, the 91st Street station found itself caught in between.

After construction of the Seventh Avenue IRT line was completed, the 91st Street platform was nearly touching the neighboring stops. The street-level entrance was just over 2 blocks from the southernmost 96th Street entrance. The significant change to the route had quickly rendered the 91st Street station obsolete and on February 2, 1959, the station closed for good. 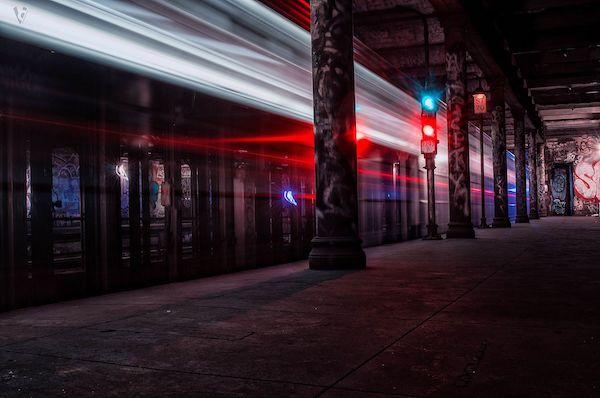 For the last 60 years, the 91st Street subway station has sat in the dark, collecting dust, grime, and graffiti. Today, you would never know the 1, 2, and 3 trains speed through the old station as its shadows look no different than the rest of the black tunnel flashing by.

But if you put your face to the window and peer out into the darkness, you can still catch a glimpse of the “ghost station,” its abandoned token booth, and its many layers of graffiti.

UWS Hoard Finally Gets Cleaned Up

Virtual Passover Seders by the JCC