Home
Community
A Big Snowstorm Could Be Coming

The National Weather Service is predicting a snowstorm in NYC this week.

Our Hazardous Wx Outlook states potential for significant coastal storm bringing heavy snow and/or rain, strong winds, and coastal flood impacts towards mid next week. Potential extent of precip as well as potential factors that drive development of the storm are shown by WPC. https://t.co/wK2dCB3Rrv

According to weather.com, the storm is likely to hit NYC on Wednesday afternoon and continue into Thursday morning, and will be followed by a cold but sunny Friday.

NBC’s Storm Team 4 predicts up to a foot of snow, which would make it the biggest snowstorm in NYC since 2016, when 27.5 inches were recorded in Central Park. 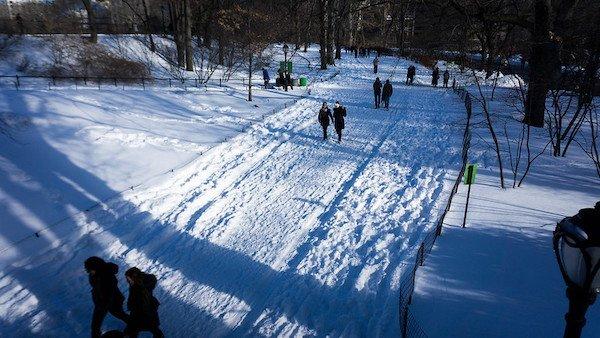 Central Park, after the blizzard – taken on January 24, 2016 by Flickr user Jeffrey Zeldman

The Department of Sanitation has issued a ‘Winter Operations Advisory,’ through which it will “coordinate with other City agencies on snow clearing protocol in accordance with each agency’s written snow plan.” The advisory further adds that “All relevant city agencies have been notified and the Department will continue to monitor forecasts as the snow event approaches.”

A Colorful Invasion: The Spotted Lanternfly Says Hi to Manhattan