By Walker Jones, a grateful Upper West Side resident for 33 years 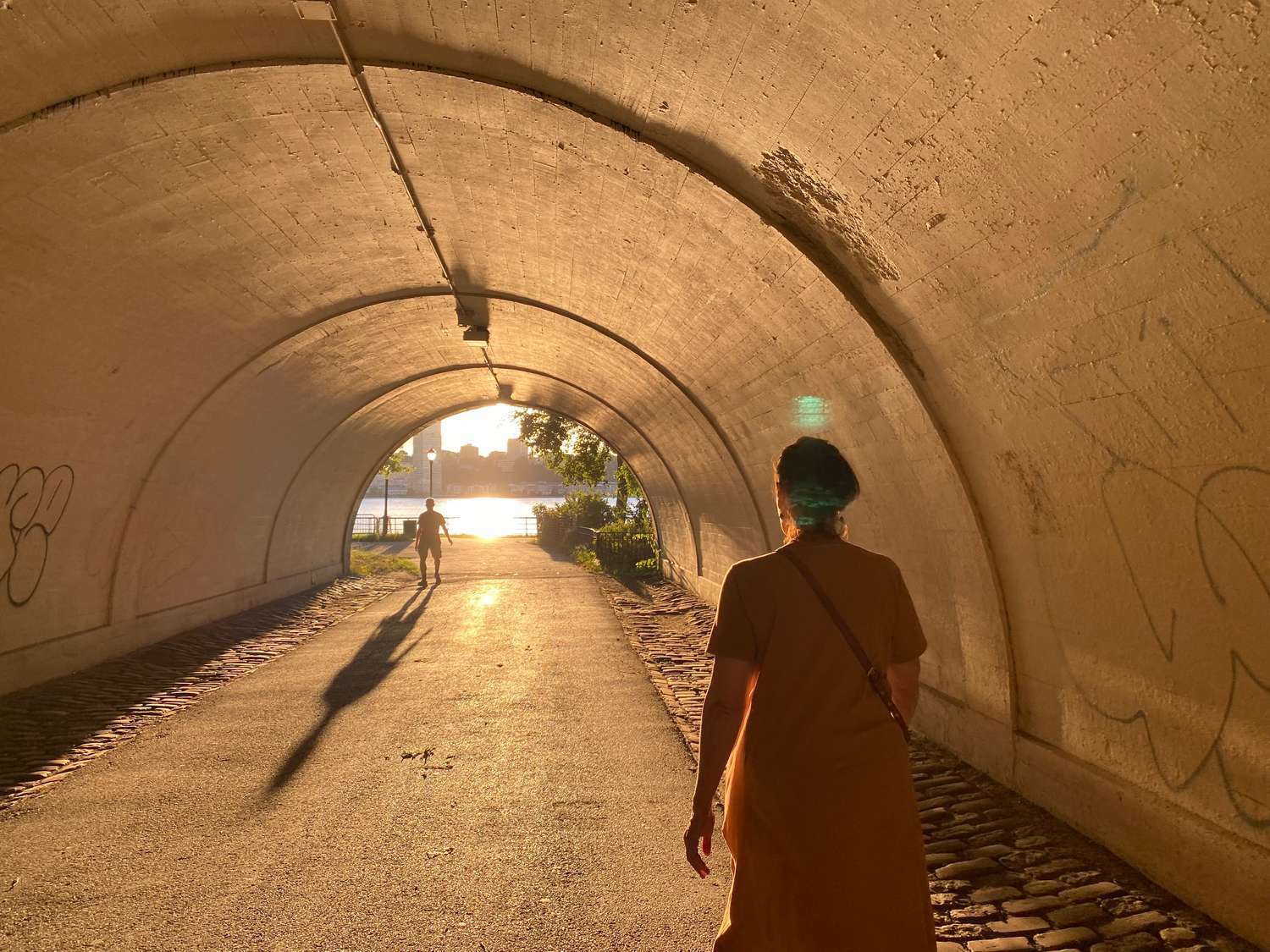 August 13, 2022: On our way through the “Magic Tunnel”(around 83rd Street and Riverside Park) for a sunset stroll to the 79th Street Boat Basin Pier.

I like to be on the lookout for NYC “Miracle Moments.” Sometimes, it’s just a matter of having the “eyes to see” and the “ears to hear”…

What’s a “Miracle Moment”? Well, I wouldn’t want to get too literal. But let’s just say that when it happens, you know it’s happened, and it changes you or uplifts you. Somehow, it leaves your soul feeling nourished.

This past Saturday, August 13 turned out to be a “Lucky 13” day for a woman named Candy who had biked to the 79th Street Boat Basin pier around the time of sunset.

At first, however, things did not seem so lucky, as her bike tipped over and her backpack fell right into the Hudson River. It was a total “uh oh!” moment, for sure. Candy was by herself and watched helplessly as her backpack just floated there in the water. “It’s got my house keys!” she exclaimed. “And my AirPod earphones!”

Everyone there felt helpless. A couple weeks earlier, I’d seen people swimming in the Hudson for a triathlon that was scheduled, but I just didn’t feel up to jumping into the river to rescue the backpack. Apparently, no one else did either. But we tried to think of ways we could help. Candy called 911 but was told that if there wasn’t a life-threatening emergency, she’d have to call 311. But even after calling 311, it was still very challenging. She couldn’t seem to connect with anyone that could help.

Then, out of the blue, a woman spoke up to reveal herself as an off-duty police officer. She made a call and found the phone number for the New York Harbormaster and gave it to Candy. The Harbormaster was reached but said that it might take quite a while for the nearest boat to arrive from Battery Park. Meanwhile, the backpack was drifting further and further away — in the direction of the George Washington Bridge.

After a while, it seemed like there might be no solution in sight. Sadly, thinking there was nothing more I could do to help, I began to walk away with my friend who was with me.

When we got to the esplanade, we suddenly saw a small boat headed in the direction of the backpack. Maybe the boat was sent from the Harbormaster? No, the boat passed right by the backpack. They didn’t even see it.

That’s when a bunch of us — random New Yorkers who did not know each other at all — sprang into action. We got as close as we could to the boat and YELLED for them to turn around. After a while, they figured out what we were trying to say, and the little speedboat with its two occupants did turn about. They plucked the backpack out of the water, then headed to the pier where Candy and others were happily jumping up and down.

Wayward backpack gets rescued by random New Yorkers in a random boat!

When the little boat got to the pier, the owner felt that he could only come but so close, so he decided that he would throw the backpack to those of us who had returned to help Candy. He threw it … and missed! 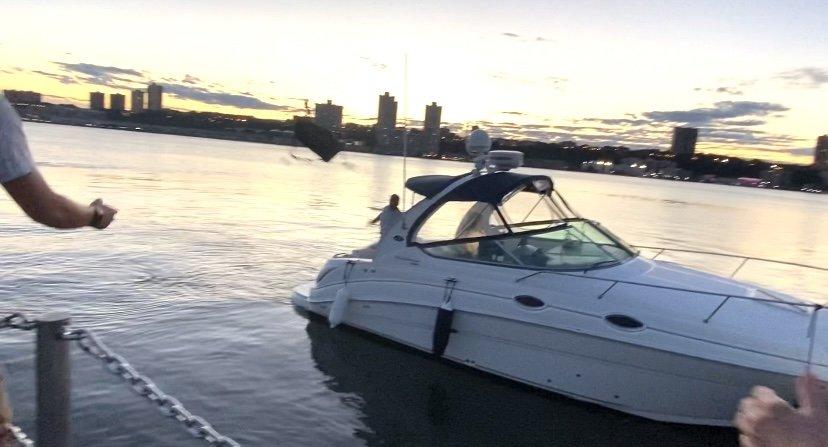 Boat owner tries to throw the backpack to folks on the pier.

The backpack went right back into the water. But this time, it was very close to the pier. At this point, a lovely young lady — another “random” New Yorker — jumped down to the lower level of the pier. She was able to reach for the backpack — and grab it! 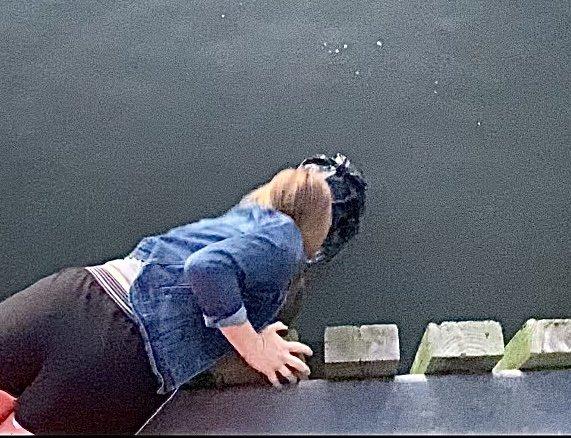 The backpack falls back into the water, but a good samaritan pulls it out!

We all cheered! Mission accomplished! Candy had her backpack again! 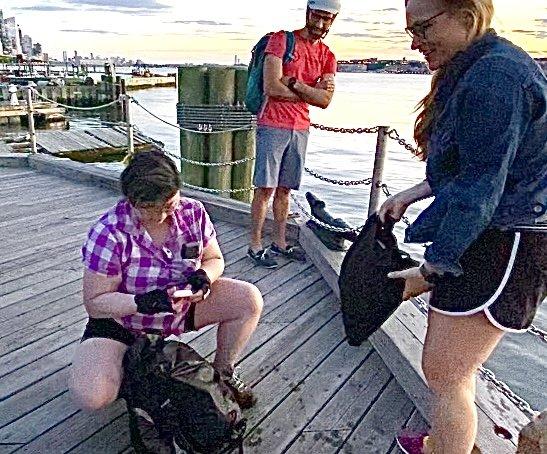 Candy is reunited with her backpack. House keys? Check! 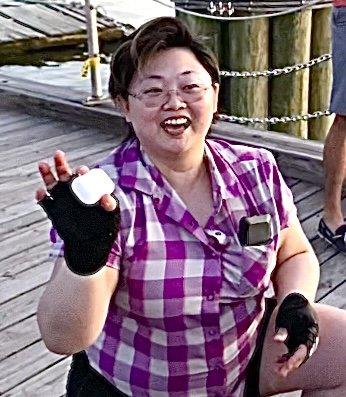 The AirPod earphones were also still in the bag, but there was a bit of damage.

Another “random” bystander just HAPPENED to be an Apple Engineer who told Candy how to take care of the AirPods in order to achieve a full recovery. 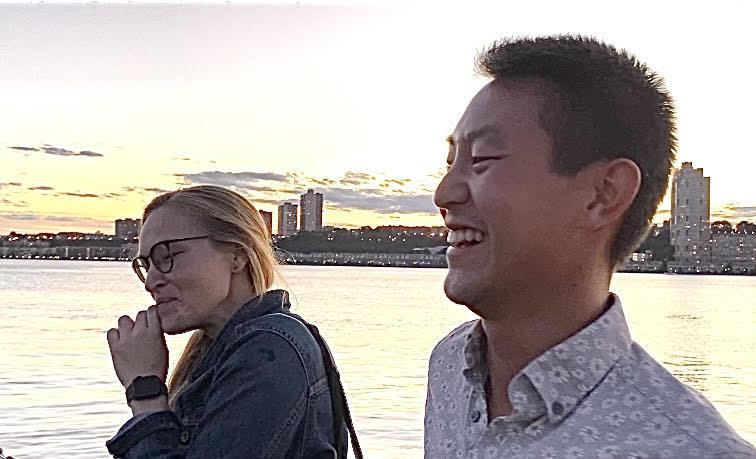 Apple Engineer who just happens to be there gives Candy some pointers about AirPod earphone recovery. 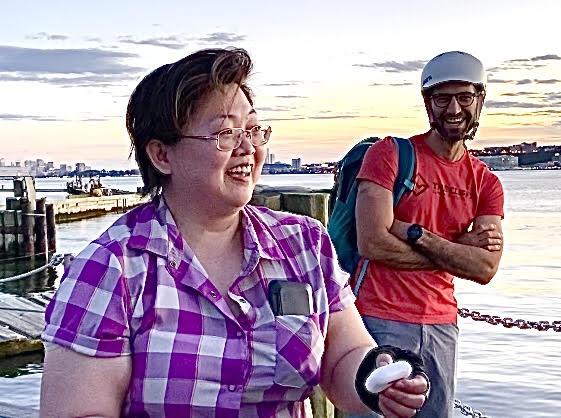 Candy’s success was ALL our successes! The saved backpack brought on a feeling of lightness and gratitude that we ALL shared!

A real New York City “Miracle Moment.” Total strangers came together to support someone that needed help. As a result, we ALL ended up feeling enriched by the experience, with gratitude in our hearts and smiles on our faces!

Candy is one happy camper! Bystanders express how great it was to just witness such a story! 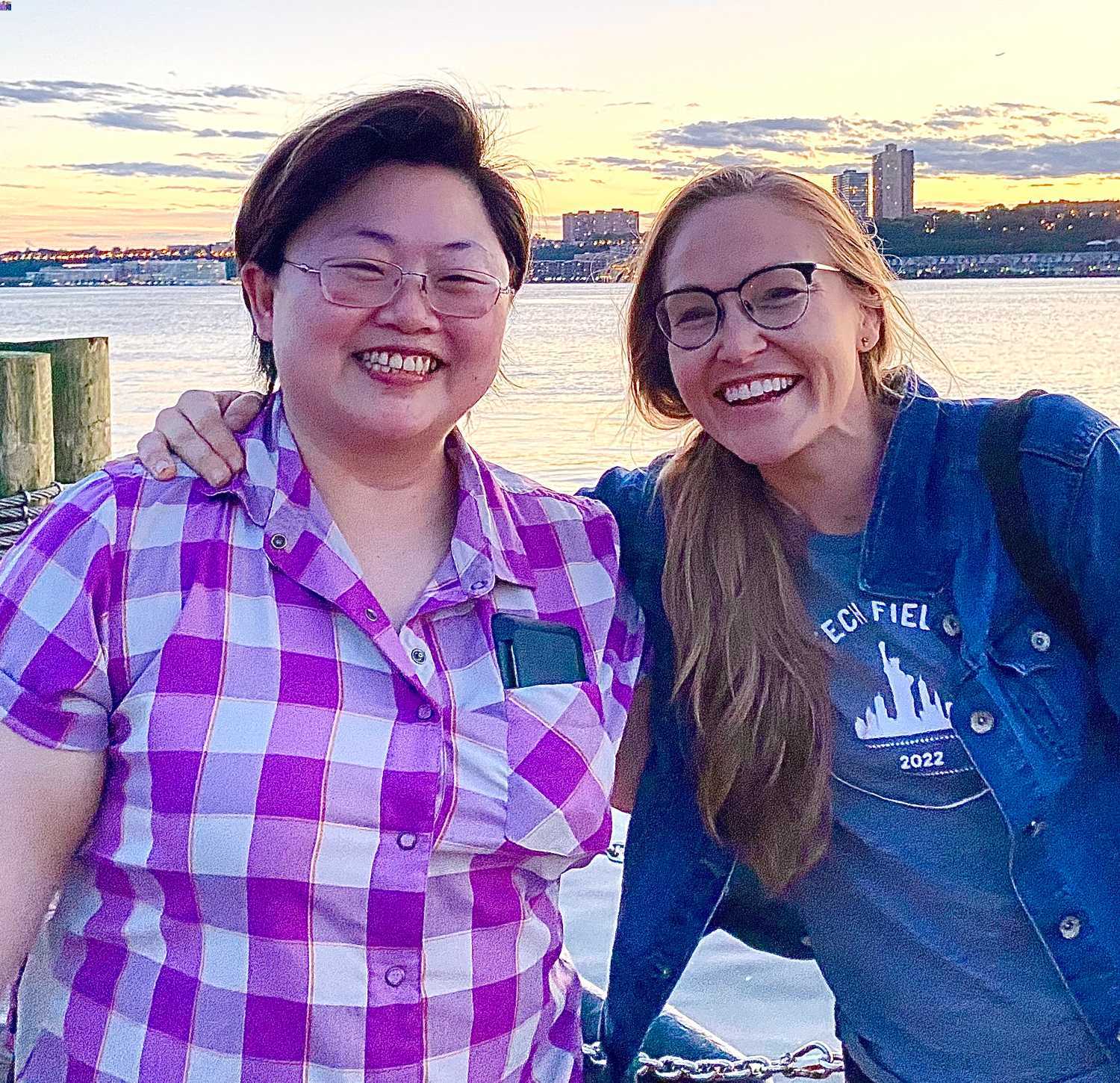 “Random” New York woman who helped pull the backpack out of the Hudson poses with Candy. 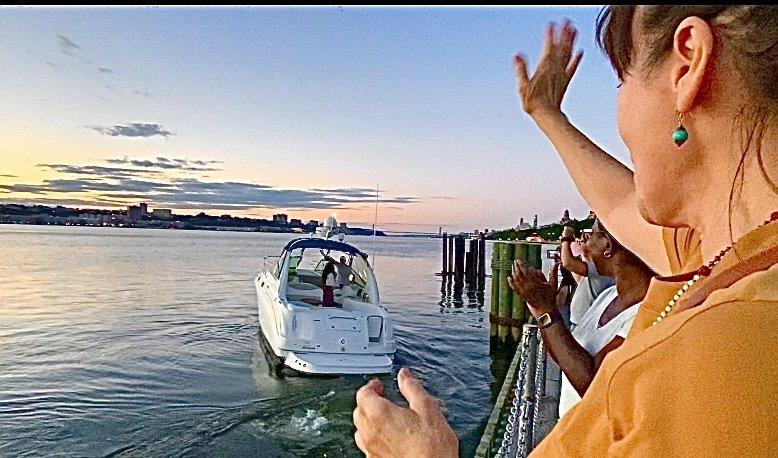 People on the pier applaud and wave to the boat owners who were kind enough to stop and help total strangers. 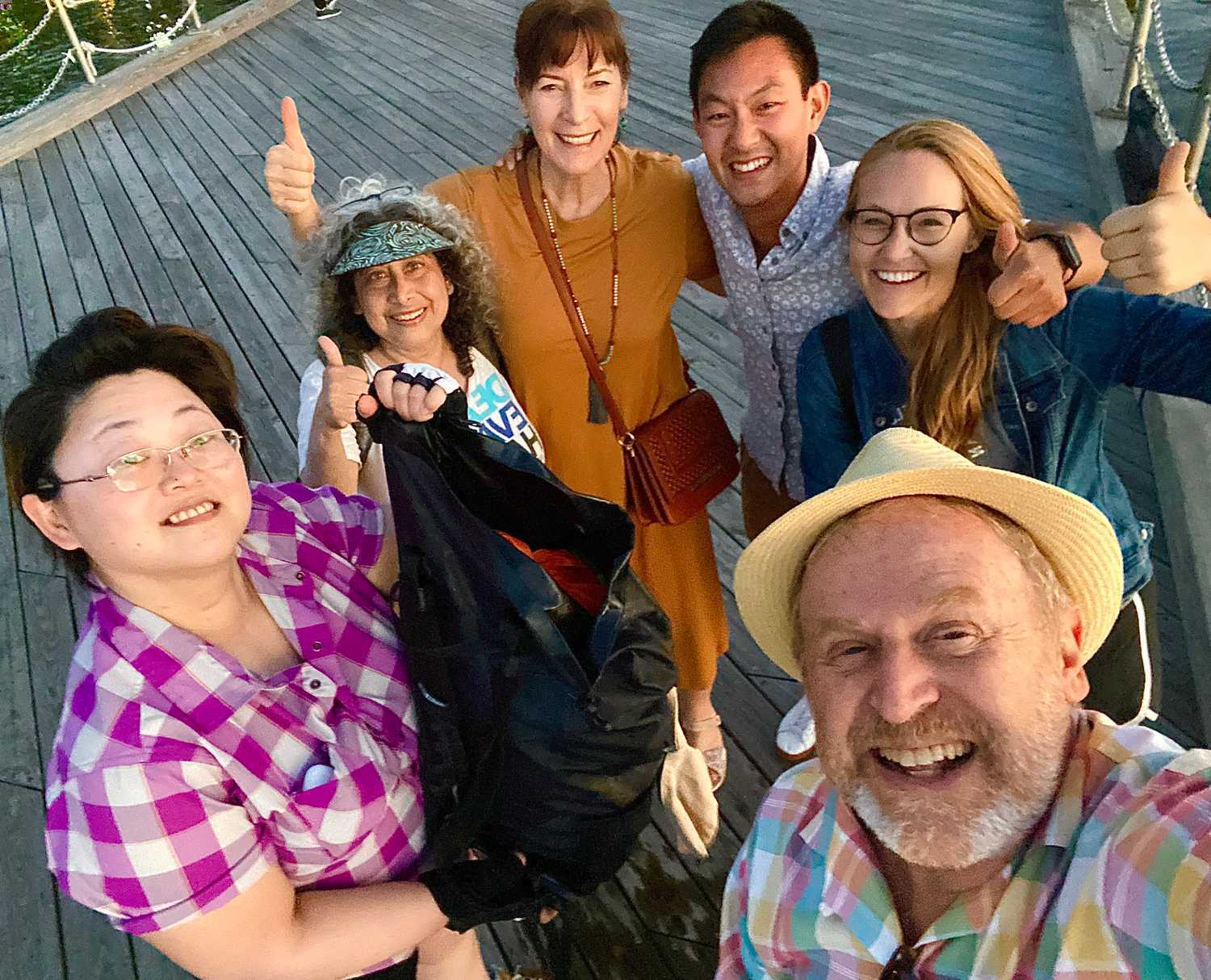 Nothing like a “New York Miracle Moment” to bring together a bunch of “random” New Yorkers.

What are YOUR New York City “Miracle Moments”?

Happy Pride Day from the UWS