Come and rock out to Hamlet Isn’t Dead’s production of Shakespeare’s Twelfth Night – breathing new life into the classic show with original rock and pop music! Performances will start on February 27th and run until March 14th at Center at West Park (86th and Amsterdam).

If you’ve never seen or read Twelfth Night, be prepared to laugh! This show is a romantic comedy based on mistaken identity and unrequited love.

Coming ashore after a shipwreck, Viola disguises herself as a man and becomes a page to a nobleman named Orsino, with whom she falls in love.

The issue is that Orsino believes that Viola is a man and so remains uninterested in her.

When Orsino sends Viola (dressed as a man) to send a love message to Lady Olivia, that’s when the real fun starts. I won’t ruin the next plot twist if you haven’t read it, but this production and cast is known to do a remarkable job of bringing Shakespeare to life.

“This young company will thrive–they may be small but they are mighty,” states a review from Times Square Chronicles.

You won’t want to miss the fine performances from some of HID’s resident actors: Maureen Fenninger, last seen as gender-bent Julius Caesar, plays the witty clown Feste; and Dave Anthony Hentz, from last year’s Hamlet, plays a multi-track clown role.  Both actors are also in the onstage rock band, which will play a pre-show and intermission concert at every performance. 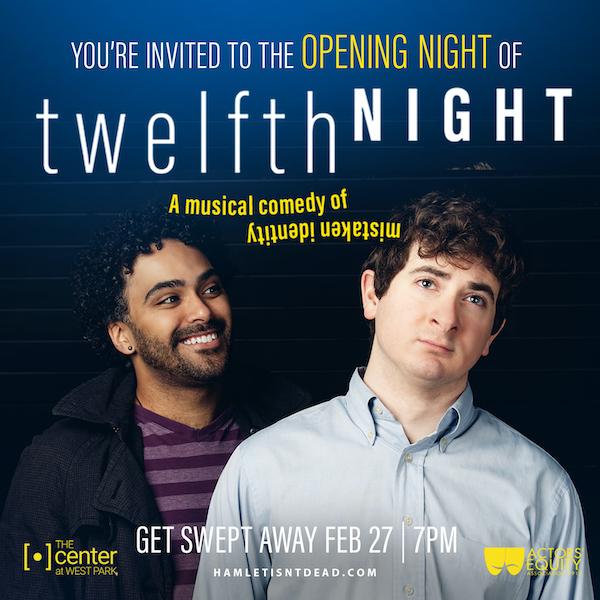 The theater group has put on many other productions at The Center at West Park, including last year’s well-reviewed Hamlet, and often overlooked Troilus and Cressida.  Critics raved about these productions, calling them “beautifully told and satisfying theater experience”, and saying “If you ever wished your kids would take an interest in something other than pop-culture trivia, give this a try. It’s simply superb.”

Hamlet Isn’t Dead makes a point to provide an authentic sense of joy to everyone in the audience.

“As Shakespeare did, we provide an authentic sense of joy to every audience member, regardless of race, creed, religion, or financial situation. Our mission is to present the best theatrical experience possible, allowing you to witness and become a part of the sublime.”

The co-founders of the group are David Andrew Laws and James Rightmyer Jr. David serves as the Artistic Director and is a Carnegie Mellon graduate, and a long-time teaching artist. James Rightmyer, Jr is the Executive Director, and is a graduate of the Liverpool Institute of the Performing Arts. He “has experience teaching and performing for all ages, and is delighted to evangelize his passion for Shakespeare to anyone who will listen to him.”

The show will be performed on Thursdays and Saturdays at 8pm, plus a 2pm matinee show on Saturdays. There will also be a pre-show and intermission concert led by clown Feste! This rock and roll rendition of a classical show will be sure to keep you laughing and dancing in your seat.

Tickets are going fast (opening night is already sold out) so make sure to get yours as soon as possible.

Kick off the New Year at Chabad’s Street Fair!