The West 111th Street Block Association is organizing a tasting event on Thursday, September 24 from 6-8pm. Attending means you’ll get to try food from various Morningside Heights restaurants for just $10! And you’ll be supporting them.

The block association is still recruiting restaurants to participate, and have gotten quite a few verbal commitments.

But so far, these are the eateries definitely participating:

The block association is trying to fill spots with as many independent restaurants as possible, so at this point they’ve avoided contacting the big chains.

Tickets can be purchased at the West 111th Street People’s Garden, located on the northwest corner of 111th and Amsterdam Avenue. Tickets will be available for purchase on the day of the event, September 24, starting at 5:30pm.

Once you have your ticket, you can bring it to any of the above mentioned restaurants (as well as any new restaurants which decide to participate between now and then). 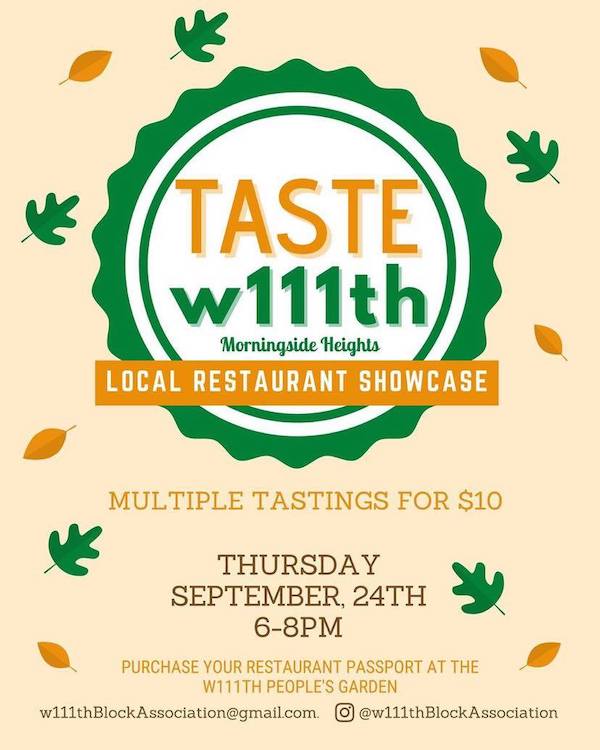 Every restaurant needs support right now. But those with locations in Morningside Heights really need our help. Since the president of Columbia University announced that all undergraduate classes would be taking place virtually for the fall semester, local restaurant owners have faced the reality of operating without their most consistent patrons there to give them business.

Indoor Dining will Return this Month

A Doggy Cafe is Opening on Amsterdam Ave