Check out the Beacon Theater 2017 lineup!

[dropcap style=”font-size: 60px; color: #9b9b9b;”]T[/dropcap]he grand old Beacon Theatre, an Upper West Side http://www.beacontheatre.com, has hosted a storied roster of performers since it’s construction in 1929, but no one artist has more history there than the Allman Brothers Band. Since 1989, with a only a few breaks in between, the Allman’s have performed their annual March run of shows at the theatre, drawing fans from near and far. When they get to town one can feel the electricity in the air on the Upper West Side. The local bars are filled with fans and ABB songs cranking out the jukebox, and everyone seems elated to be back in the neighborhood, basking in the camaraderie that the music creates. Friday and Saturday marked the first 2 shows of the band’s 11-night residency and it’s off to a great start.

The band has played quite a varied spectrum of songs so far, from hits like “Statesboro Blues” and “Midnight Rider” to classic extended jams like “In Memory Of Elizabeth Reed”, “Mountain Jam” and “Dreams”, not to mention a new original “Dusk Till Dawn” and a first time cover of Jimi Hendrix’s “1983” just to name a few. No matter what song they chose the crowd was having a ball the whole time. The March residency has become a pilgrimage for Allman Brothers fans. It’s a musical and cultural tradition now that draws many to revel in the songs of their favorite band, with likeminded music lovers, enjoying the fruits of the Upper West Side all the while. 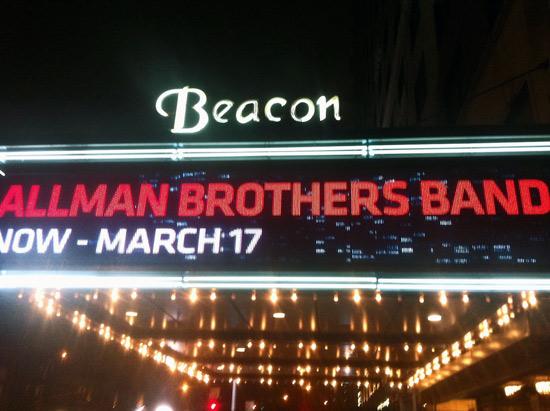 In 2010 the Allman Brothers March run conflicted with failed series of Cirque du Soleil shows, which never even happened, at the Beacon. This forced the band to relocate to the United Palace Theatre in Harlem. Though the theatre was lovely, and the band still put on some great shows, the band, crew and fans all agreed that it just wasn’t the same. Not to mention that Upper West Side business owners, especially the bars, restaurants and hotels, saw a steep drop in their normally heightened March revenues. The band returned to the Beacon last year and everyone agreed it just felt right. The theatre and the neighborhood is a home away from home for this band; they have a lot of history here on the Upper West Side and continue to keep that magic alive. Walk up Broadway towards 74th this month and you’ll see what I mean. The vibe that the Allman Brothers bring permeates throughout the neighborhood. Bars close by like Amsterdam Ale House are packed with fans clinking glasses, Gregg Allman’s voice crooning from the jukebox, and a “welcome Allman Brothers fans!” sign on the door. Blondie’s, normally a typical sports bar with fans yelling at their teams through the tv’s, has a totally different atmosphere during March as the ABB fans and roadcrew hold court there every night after the gigs. The staff there looks forward to it every year, enjoying the change of ambience that this band’s followers bring. If you’ve never experienced the Allman Brothers at the amazing institution of performance that is the Beacon Theatre, then head on over to the Upper West Side and see if it captivates you like it has so many.

Photos of the Super Blue Blood Moon in NYC

Summer on the Hudson Goes Virtual

Memorial Day Activities on The Upper West Side!