Home
Food & Drink
Back in the Day: Tavern on the Green

Who wouldn’t be tempted to spend a night under the stars on a dance floor surrounded by trees with strings of twinkling lights? All this magic was happening to the enticing rhythms of Milt Saunders’ big band orchestra and Al Castellanos’ band known for Latin sounds of rhumba and mambo. Then, of course, a drink or two between dances and something good to eat.

In her 2019 historical novel Park Avenue Summer, set in 1965, Renée Rosen describes the relatively understated but sought after seductiveness of Tavern on the Green, which in later decades became widely overblown, expensive and touristy. “The decor played off its Central Park locale with pinks and the shade of blooming flowers and greens that matched the grass outside. It was like sitting in the middle of a garden … and in between the cherrystone clam cocktail and the frogs legs sautéed in butter, we danced to the Milton Saunders orchestra. I glanced down at our feet, the tips of his shoes unapologetically bumping into my new baby dolls.”

A menu from 1950 notes “Dancing nightly from 6:45PM to Closing” and “Milton Saunders and His Orchestra – Al Castellanos and his Rhumbas.” The food was modest in price and fancy-ish: “Champagne Cocktail 75 cents.” Certainly, this is all long before Tavern on the Green aimed for the costly extravaganza cuisine of the ’70s and ’80s, drawing rich kids and celebrity birthday bashes, magazine publication anniversaries and lavish wedding parties. And, it was also pre-nouvelle cuisine or the emergence of star American chefs. Sometimes, just a French or English name for a dish represented sophistication. Take for example “Curry of Shrimps, Claremont, Major Gray’s Chutney” and among dessert options, an ice cream roll, Nesselrode sauce and Creme de Menthe Frappe. 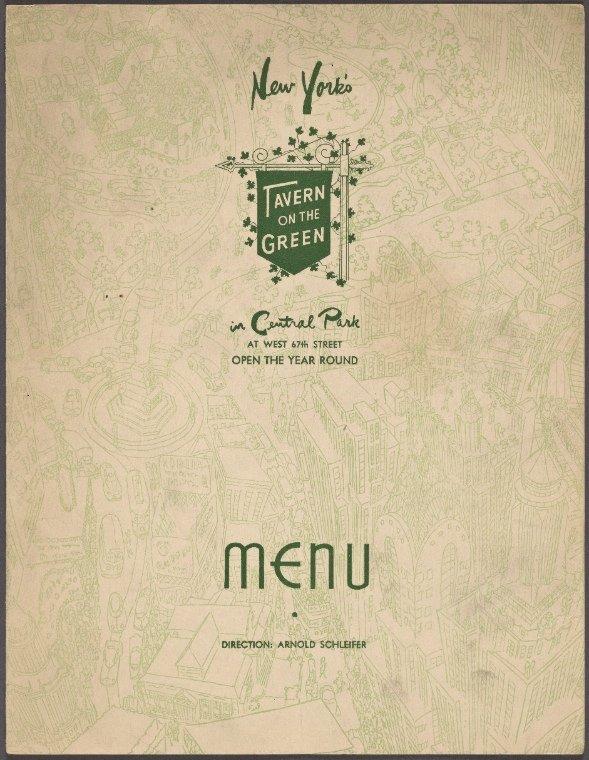 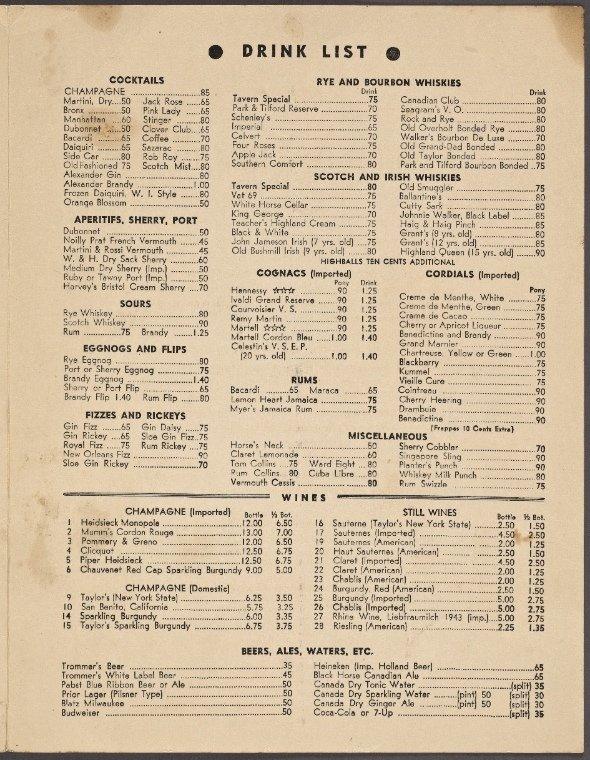 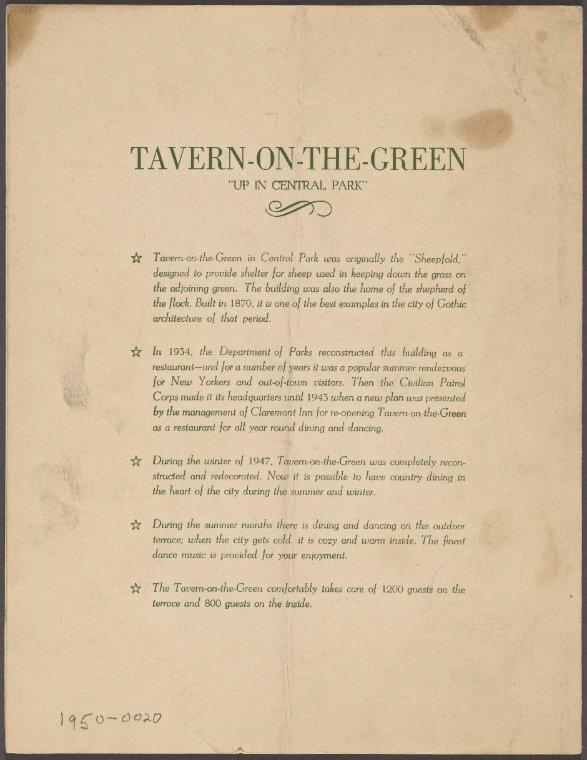 But, really, the key point was going out on the town to an undeniably special venue and beautiful space. The cover of an LP produced by Seeco called “Dancing at the Tavern on the Green – Milt Saunders and his orchestra” shows that women had the chance to dress in cocktail gowns and high heels and pearls, with maybe a mink stole in winter. Men tended toward dinner jackets with neatly folded white handkerchiefs in their breast pockets.

While relatively affordable, the special quality of the venue did result in behind-the-scenes cash maneuvers for table reservations.

The original concept to turn a shelter for sheep in Central Park into a restaurant leased out by the NYC Department of Parks was thought up by Robert Moses, then NYC Commissioner of Parks. The plan, coordinated with Mayor Fiorello Laguardia, was to create a restaurant that would be tonier than a simple park concession, but still affordable for many community members.

The restaurant, with its name harking back to New York’s colonial past, also emphasized a colonial style in the costumes worn by waitstaff, depicted in a vintage NY Times photo. A 1934 launch event featured the Central Park Band. After opening the restaurant with a ceremonial brass key, Mayor Laguardia and Moses were among guests who enjoyed sausage and other breakfast items. From the late 1930s until 1943, Tavern on the Green was taken over and used as the headquarters for the Civilian Patrol Corps.

Originally a seasonal venue, the restaurant was renovated in 1943 for year-round use. The hallmark twinkling lights wrapping the branches of surrounding trees, an enlarged dance floor and the Elm Tree Room was built to encircle an American Elm tree. 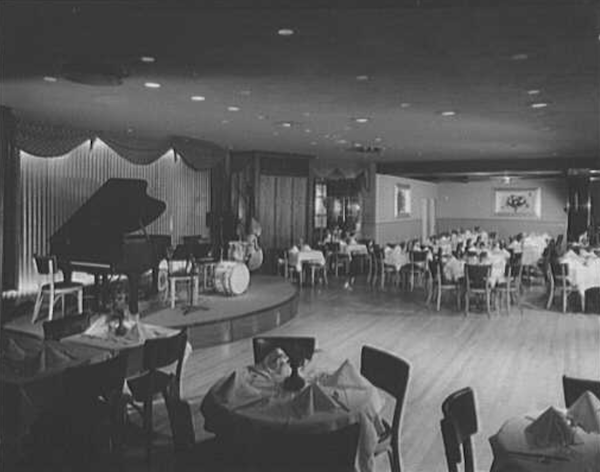 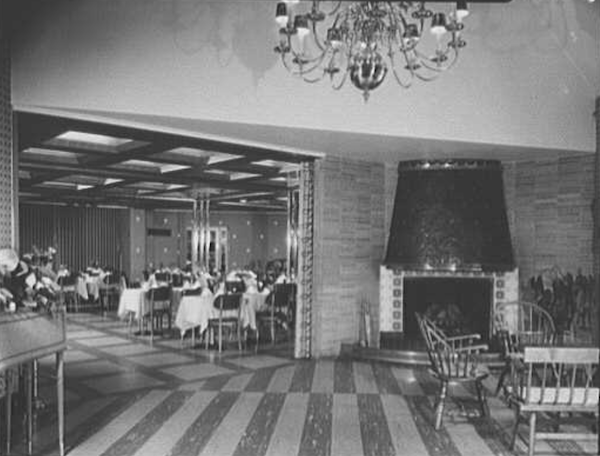 Fireplace and vista to cocktail room – 1957. c/o Library of Congress 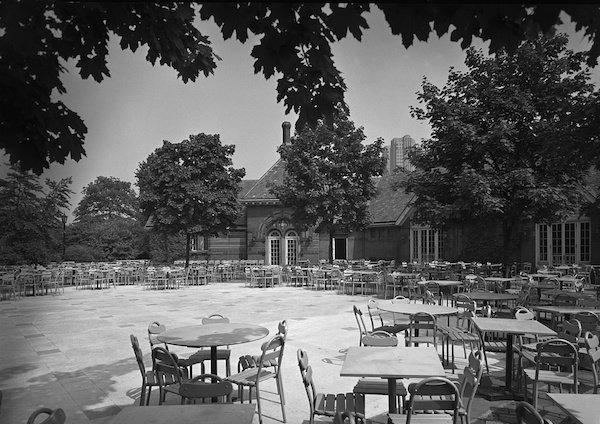 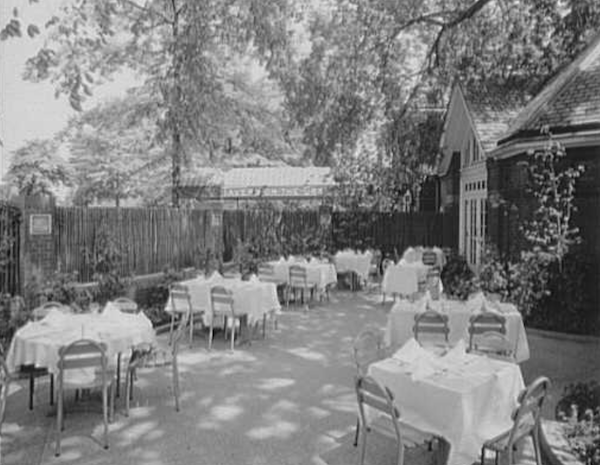 Tavern on the Green then enjoyed a period of success. Toward the end of the 1960s, the building and discrete style was faltering as it pressed up against the emerging strength of a go-go razzmatazz culture. That was the end of a time vastly different from the revamp of the restaurant during the Warner LeRoy era (1975-2000) and the later rollercoaster fortunes of this restaurant.

Some longtime New Yorkers remember seeing the twinkling lights as they passed by Tavern on the Green during every season of the year. For others, the name Tavern on the Green resonates for a different reason. Known as The Battle for Central Park, the 1956 protests of an expansion of Tavern on the Green’s parking lot was a forerunner of land conservation and environmental protection advocacy that has become widespread, even global over time. Groups of mothers and children who lived in the area were relentless in protesting the removal of trees for the asphalt expansion proposed by Moses. The protestors won. The resulting two level playground across from Tavern on the Green has been used by several generations of children.