It’s getting chilly, but there’s too much to do to stay inside!  From live performances to outdoor markets to wine and whiskey tastings, here are the best November events in NYC.

The annual White Light Festival began on October 16th and will run through November 18th. This performance arts event will be taking place at various Lincoln Center theaters, and this year’s theme is the communal, and how art impacts our lives within the groups with which we identify and coexist.

November 2nd and 3rd at the Brooklyn Expo Center.

The general admission price is $65 and includes unlimited tastings.

This charitable design competition asks its participants to build structures made entirely out of cans (with food still in them). All of the food from the sculptures are then donated to City Harvest.

Some of the biggest comics to participate include Bill Burr, Conan O’Brien, Gabriel Iglesias and Jim Jefferies. The New York Comedy Festival has been a staple event for comedy fans since 2004.

This ninety-minute production stars the famous Rockettes, and this year there will be a brand new finale with flying drones which will be used to create a stunning holiday light show.

Enjoy over 100 types of whiskey and additional spirits from all over the world.

November 29th through December 2nd at the Wythe Hotel in Brooklyn.

Various dates in November and December; the cruise leaves from Chelsea Piers.

The parade starts on 77th and Central Park West and finishes in Midtown.

This wonderful production is created through the work of ninety dancers, sixty-two musicians, thirty-two stagehands and two casts of fifty young students each from the School of American Ballet.

This night of food, entertainment and shopping will take place between Columbus Circle and West 70th Street.

Opens on November 28th and runs through December 24th.

Shop from over 100 vendors offering food, crafts, and clothing.

The annual lighting of the enormous Rockefeller Center Christmas tree is followed by two hours of live entertainment. The tree will remain lit until January 7th. 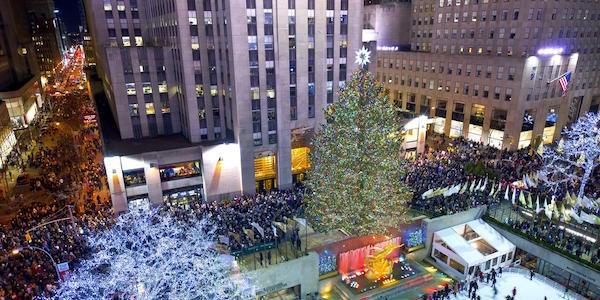 Martin Luther King Day on the Upper West Side