The man who promoted the biggest names in music, Bill Graham, now has an exhibit dedicated to him at the New York Historical Society. For anyone who loves the Grateful Dead, Jimi Hendrix, Bob Dylan, Janis Joplin, the Rolling Stones, U2 or many more iconic bands, this is an exhibit you don’t want to miss.


Bill Graham and the Rock & Roll Revolution, is organized by the Skirball Cultural Center. The exhibition debuted in Los Angeles, showcasing more than 300 objects including photographs, memorabilia and posters. The exhibit in New York highlights Graham’s connection to New York, starting with the installation of “The Joshua Light Show.” The light show was created by Joshua White, and they were the backdrop to all of the shows Graham produced in New York.

Many fans are excited to see this exhibit come to New York. My father, Harris Lewin, recalls meeting Graham on June 26th, 1971 outside of the Fillmore East.

“Bill Graham was out front greeting the crowd as they were coming in. There was a beautiful gold edition program that was handed out that night. I asked Bill to sign my copy and he said sure. He signed with a marker pen on the back cover and wrote ‘thanks for asking.’  It was a very nice gesture – I still have the program!” Lewin said.

Fans can enjoy an immersive audio experience where you can listen your way through the songs by the Doors, Tom Petty, Blondie, David Bowie and more.

Born in 1931, Graham was a holocaust survivor. His father died only two days after he was born, and his mother had to give him up to an orphanage in Berlin due to threats against Jewish people. The orphanage sent him to the USA, and he narrowly escaped and survived the journey. Once he made it the USA, he lived in the Bronx, in a foster home. He made it his goal to become a true New Yorker.

Graham also served in the Army and was awarded the Bronze Star and Purple Heart.  When he returned home from Korea, Graham moved from New York to San Francisco and worked at the Fillmore Auditorium. It was here that Graham found his skill at promoting concerts and causes. He then came back to New York and opened the Fillmore East.

Lewin recalls, “On that last night that the Fillmore East was opened, or morning I should say (the concert ended at 7:00 am), I looked over toward the edge of the stage and saw Graham leaning up against the PA speaker and visibly crying as it all came to an end. The Allman Brothers were playing their final notes after a 5 hour performance – probably the greatest performance ever for which there is no recording (it was apparently lost).  Graham was obviously moved by the music and the emotion surrounding the closing of the Fillmore East, the place where he brought rock music to the people in an incredible intimate format.  And let’s not forget that the Fillmore East held less than 3,000 people and the most expensive ticket in the house was $6.50 to see all the world’s greatest bands. Graham can truly be said to be the godfather of modern rock and roll.”

One of Graham’s crowning achievements was his 1973 outdoor concert in Watkins Glenn, New York.  This concert featured The Allman Brothers, The Grateful Dead and The Band. Reports state that over an estimated 600,000 people attended. This gave way to promoting stadium concerts we see rock bands playing today.

Known as a philanthropist and genuinely caring person, Graham was known for not only putting on a great show, but also making sure people were safe. He was the first person to make sure there was medical staff available at concerts in case of emergency.

“Graham was always interested in his customers, having a unique, positive and safe experience at shows he promoted.  He was very kind to his patrons if they were respectful.  Not so if they were rowdy or disrespectful to others or the musicians.  He exposed a whole generation of kids to many different kinds of music by combining acts in unusual ways,” Lewin said.

Graham died in a helicopter crash in 1991 as he was coming back from securing talent for a benefit concert. Graham’s legacy lives on through Live Nation, and through all the rock concerts you see in stadiums around the world.

Bill Graham and the Rock & Roll Revolution will be on view through August 23rd, 2020 at the New York Historical Society. Find tickets and more info here. 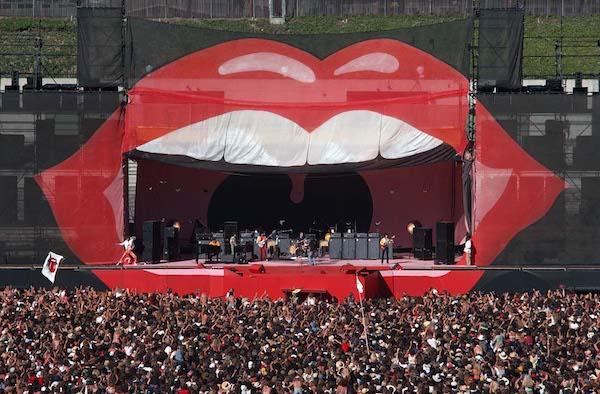