If you visited the old Tower Records on West 66th Street in 1997 or 1998, chances are you heard the unforgettable voice of Billie Holiday crooning on repeat from the vocals section just atop the long escalator that overlooked the adjacent Barnes & Noble. Her voice was honest and disarming and bolstered by the brassiness of the instruments playing behind her. Her musical repertoire reverberated off the two-story tall glass windows just above Broadway for hours on end.

Billie Holiday was jazz royalty. A legend. An incredible talent. Courageous and hard to forget. An Upper West Sider, she was an incredible pioneering woman who had virtually everything working against her but managed to reach the peak of success as a black woman during a time when lynchings and government sanctioned segregation were commonplace.

But the truth about her demons and tormentors are quickly becoming public record – thanks in part to Hulu’s The United States vs. Billie Holiday. This new candor is helping to provide some light and understanding about some ugly truths for those who were born into and remain in situations similar to Holiday’s.

Holiday was born Eleanora Fagan Gough on April 7, 1915 in Philadelphia to Sarah Julia “Sadie” Fagan and Clarence Halliday. Her father left her and her mother soon after she was born. Eleanora would grow up in “jazz soaked Baltimore of the 1920’s,” as described on billieholiday.com. Working from the age of six, she had her first run-in with the law when a juvenile court deemed nine-year-old Eleanora to be truant and “without proper care and guardianship.”

She was committed to a Catholic reform school for a year. When released in 1925, she worked at her mother’s restaurant, the East Side Grill. But Eleanora would return to the school as a protected state witness after her mother witnessed her being raped by a neighbor on Christmas Eve 1926.

Eleanora ran errands for a Baltimore brothel at age 11 but moved to New York in 1929 to live with her mother Sadie in Harlem. With no opportunities for gainful employment elsewhere, both mother and daughter worked as prostitutes for madam Florence Williams, a brothel owner and their landlord. Eleanor and Sadie were sentenced to a workhouse on Roosevelt Island (formerly Blackwell then Welfare Island) after their building at 151 West 140th Street was raided on May 2, 1929.

Soon after her release, teenage Eleanora began to perform at various Harlem nightclubs and adopted the pseudonym Billie Holiday, Billie for actress Billie Dove and Holiday from her musician father’s stage name. She was discovered at age 18 by producer John Hammond, and soon thereafter recorded a record with the Benny Goodman Orchestra.

“From 1935 to 1941 Holiday’s career accelerated, recording hit after hit with pianist/arranger Teddy Wilson. Simultaneously, in 1936 she began a legendary string of collaborations with tenor sax giant Lester Young.” In 1937, she joined Count Basie’s orchestra and joined Artie Shaw’s in 1939 to become the first black woman to work with an all-white band.

During the height of Holiday’s career, she and her mother lived at 9 West 99th Street, which included a period with Lester Young who gave Billie the Lady Day moniker. Sadie owned a restaurant downstairs from their apartment called Mom Holiday’s. The family lived at this address from 1934 until Robert Moses’ urban renewal cronyism obliterated the black enclave formerly known as Manhattantown.

One of Holiday’s best-known classics, God Bless the Child, was born in her mother’s restaurant. “In her autobiography Lady Sings the Blues Holiday indicated an argument with her mother over money led to the song. She indicated that during the argument her mother said the line ‘God bless the child that’s got his own.’ The anger over the incident led her to turn that line into a starting point for a song, which she worked out in conjunction with her cowriter Arthur Herzog, Jr.”

Holiday and Young first recorded together at 1776 Broadway in 1934. She would also record and perform at a number of Upper West Side locations including the childhood home of Lady Gaga at 135 West 70th Street, as well as in the living room of 340 Riverside Drive at 106th Street.

OLD JAZZ CLUBS OF THE UPPER WEST SIDE

Holiday struggled with substance abuse. It’s been reported that she kept a room at the former Endicott Hotel on Columbus Avenue between 81st and 82nd Streets as a “hardened heroin user” in the late 1940s and 1950s. It was this addiction that ultimately served as Holiday’s undoing, but not for the reasons one may think.

As Eonline reported just last week, Holiday was targeted in 1939 not because of her narcotics addiction, but because she refused to stop singing Strange Fruit, “a protest song objecting to the abuse of Black people, sung two years after Congress refused to pass a bill that would have made lynching a federal crime, [it] just wasn’t the sort of art that the United States government could sanction. Holiday was ordered to stop performing the song. She refused, despite being warned (by people inside her own circle, as well as by law enforcement) that it could ruin her.”

The warnings became reality. Holiday was arrested in her New York apartment in 1947 for narcotics possession. She pled guilty after her own attorney refused to come to court to defend her. The prosecuting attorney implored the court to intercede to help Holiday with her addiction. Instead, the court sentenced her to federal prison time.

After her early release for good behavior in 1948, she sold out Carnegie Hall, continued to tour and, up until her death, lived at 26 West 87 Street. The general public supported her at stops nationwide and the government sought to silence her, dissatisfied that she had yet to be made an example of despite her recent prison stint. 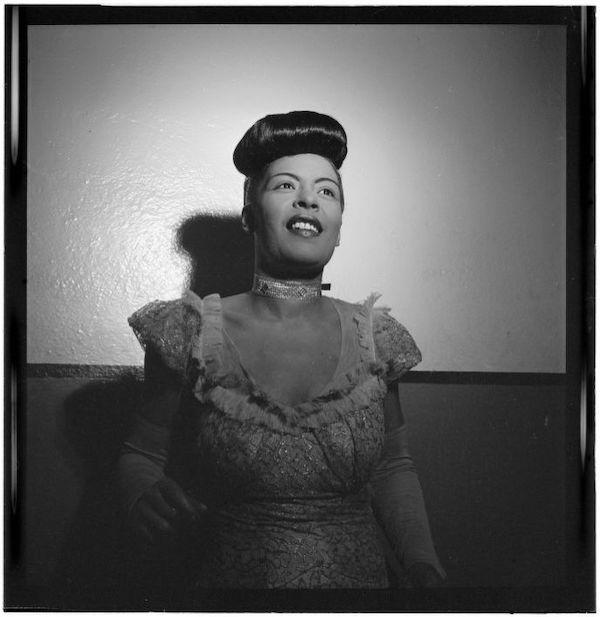 “It is true that after her release from prison, Billie was constantly being brought before the courts of law on one pretext or another …” Julia Blackburn wrote in 2005’s With Billie. “… and several people who worked with her attested to the fact that the police and other government agents were always at her shows — heckling, threatening, raiding her dressing room, making embarrassing enquiries at her hotel and spreading rumors at the clubs where she was booked to sing.”

Those who opposed Holiday’s continued success eventually won. Her career waned as did the public’s support. With 70 cents in the bank and $750 strapped to her leg, Billie Holiday died handcuffed to a hospital bed in the Bronx on July 17, 1959 from cirrhosis complications. She was 44 years old.

“And as she lay dying in a bed in the public ward of Metropolitan Hospital in New York, having been turned away from Manhattan’s Knickerbocker Hospital for being a known drug user, her room was raided and she was put under arrest for illegal narcotics possession. Cops found less than an eighth of an ounce of heroin in a tinfoil packet hanging from a nail on the wall across from her bed. She was too ill to be taken into custody, so a police watch was posted outside her door while she went into withdrawal, one final indignity after 20 years of the authorities keeping tabs on her.”

Holiday was a tragic figure, a life cut short by personal demons worsened by tormentors who realistically had the ability to help her. She had a chance to be that story of triumph, that one-of-a-kind inspiration to win against all odds. But the odds did their very worst to shove her back to the life of hardship and lack of opportunity that she worked so hard to pull herself and her mother from.

Despite her struggles with addiction, Holiday did prove that anything was possible. She did so at the highest levels for a very long time in her very short life. Her talent prevailed and it was that talent, along with her grit and bravery, that secured her place as a legend. That is what she is remembered for. Given all she has been through in her life – the abject poverty, the horrific rape by a neighbor as a child, the compulsion to work as a prostitute at 14 alongside her mother, the discriminatory targeting by those a million times more powerful than she could ever be – it is what she deserves to be remembered for. 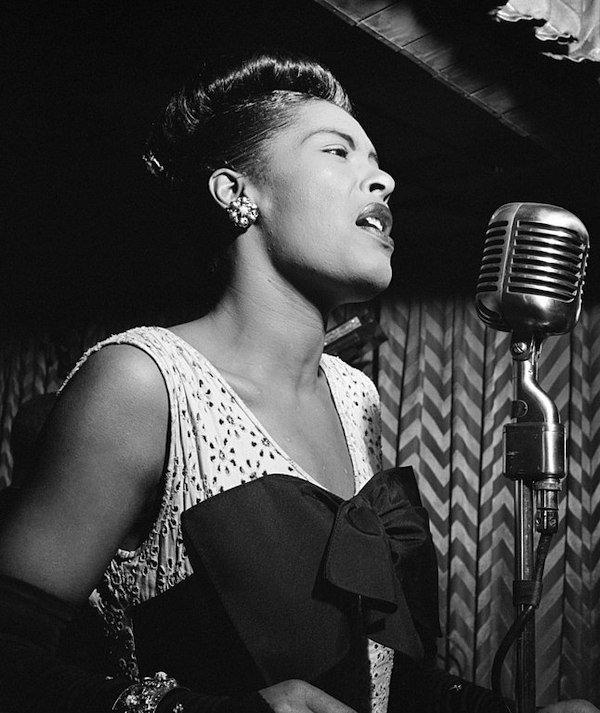 Billie Holiday at the Downbeat club, a jazz club in New York City, February 1947. Photo via the William P. Gottlieb Collection at the Library of Congress

In 1958, Frank Sinatra said, “Billie Holiday…was, and still remains, the greatest single musical influence on me … [and] is unquestionably the most important influence on American popular singing in the last twenty years.” Sinatra knew. He got it right. And so, too, have some with the stature to remember her properly.

Eonline’s article states that “Holiday’s 1939 recording [of Strange Fruit] was inducted into the Grammy Hall of Fame in 1978 and the Library of Congress selected it for preservation in the National Recording Registry in 2002.” She was posthumously inducted into the Women’s Hall of Fame in 2011, the Nesuhi Ertugan Jazz Hall of Fame in 2004, and the Grammy and Rock and Roll halls in 2000. She was awarded with the Grammy Awards Lifetime Achievement Award in 1987 and received a star on the Walk of Fame in 1986. Time Magazine named Strange Fruit the Song of the Century. The US Postal Service honored her with a stamp in 1994. Sinatra recorded the song Lady Day in 1970 as a tribute. Langston Hughes wrote a poem for her titled Song for Billie Holiday.

All of it well deserved. Quite the legacy for Lady Day.