Just before noon on Tuesday, January 7th, Book Culture sent out an email stating that Book Culture on Columbus had to temporarily close.

“Book Culture on Columbus has had to close unexpectedly. We will have more specific details shortly and we apologize for any inconvenience”, the email stated.

A sign was posted in the window, along with a Marshall’s Possession Notice. 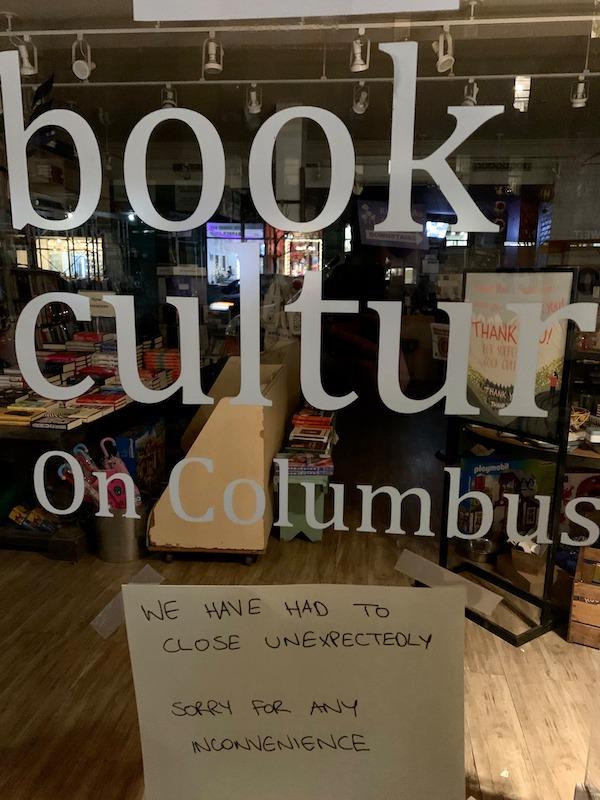 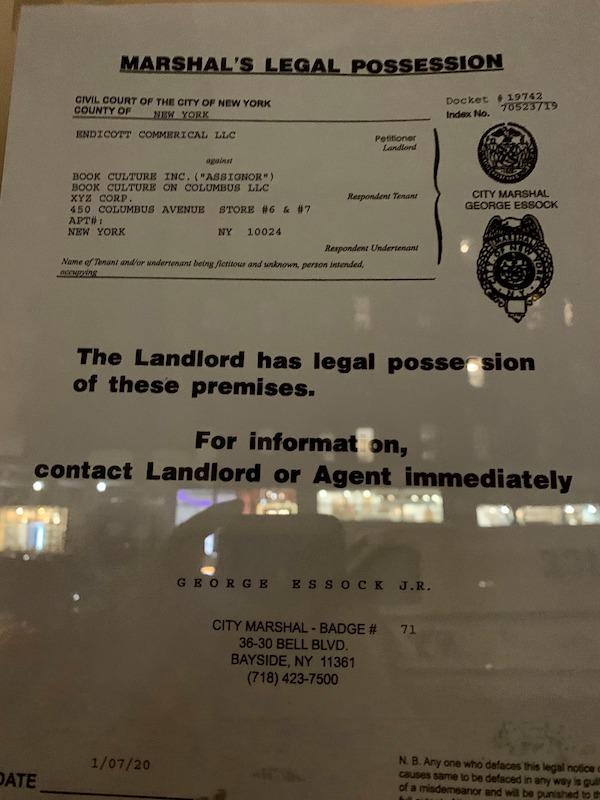 Later in the day, Book Culture’s owner, Chris Doeblin, made the following statement on Facebook:

To all our neighbors and families and supporters. Our beloved store on Columbus was seized today unexpectedly, by our landlord. I mistakenly believed that action was retracted after paying our rent the last 5 months and cutting our arrears by $35k in December.

Over the summer, before we began our effort to find support from the City and State and before we began our Community Lending Program, we had fallen 3 ½ months behind on our rent. Our landlord was gracious enough to show the forbearance that allowed us to stay open and make payments while we clawed our way back to viability.
Suddenly, that is no longer the case. I am working very hard to find a solution and will continue to update folks here and via emails.
Finally, in the last few days at the end of the holiday selling season, we thankfully saw sales numbers that beat last year and we had a real surge of optimism that accompanied the loads of books and gifts and shoppers that had flooded back into our stores. This was true at all 4 of the stores.
I hope very much that we can find a solution and we are all working on it.
I will keep you posted. You may write directly to me at chris@bookculture.com if you have questions.
Thank you for all your support.
Sincerely, Chris Doeblin

The most recent update came around 2:30pm on Wednesday.  Doeblin sent out another email, stating that they need another investment of $140,000 in order to reopen the Columbus Avenue store. For now, the Columbus Avenue employees will be relocated to one of Book Culture’s other stores.

During June of 2019, Doeblin sent out an email to his customers, stating that all 4 stores were in danger of closing and that they need assistance from Book Culture’s customers as well as government help.

Doeblin then followed up in July with a more specific survival plan for Book Culture. The plan stated that the bookstore would need to raise a total of $750,000, either in the form of loans or a line of credit, and that all funds would be repaid. According to Book Culture’s website, they have currently raised a total of $572,750.

We’ll provide an update once more info comes out.