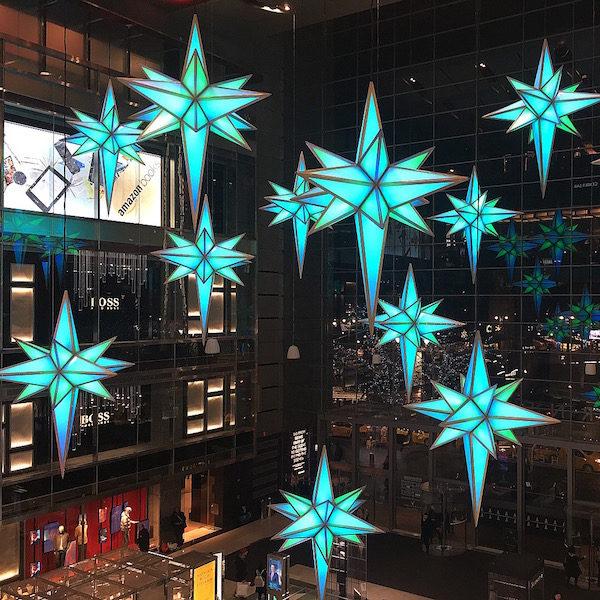 The Great White Way is headed slightly uptown. As of last week, the famed “Broadway Under The Stars” concert series has returned to The Shops at Columbus Circle on select Wednesdays for the holiday season.

Nestled under twelve illuminated stars (measuring in at 14 feet, to be exact) on the mezzanine, some of Broadway’s best and buzziest shows are offering up gratis performances for tourists and locals alike. Last week’s offering included Chicago, the longest-running revival in Broadway history, and A Strange Loop, which picked up five Tony Awards last year (not to mention a Pulitzer Prize).

Next up on the calendar for Wednesday, December 7 are performances from The Phantom of the Opera and Kimberly Akimbo. The former (which truly needs no introduction) is set to end its historic run at the Majestic Theatre on February 18, 2023 — so snagging a free front-row seat is likely the most cost-effective way to see iconic hits like “All I Ask of You” and “Masquerade” live before the curtain closes for good.

Meanwhile, Kimberly Akimbo, which recently opened on Broadway, has already been dubbed a New York Times Critic’s Pick. The quirky plot revolves around “a bright and funny Jersey teen who happens to look like a 72-year-old lady.” Color us intrigued…

Though these are the only shows confirmed at press time, stay glued to The Shops at Columbus Circle’s official Instagram account for further info. Of course, given the location of the festivities, there’s substantial reason to take advantage of holiday shopping opportunities, as numerous stores are offering promotional discounts tied to the event. Once cast members take their bows, we’re sure attendees will flock to the adjacent eateries — including Momofuku Noodle Bar, Blue Bird London and Porter House Bar & Grill. Our tip? Make your reservations now.

Broadway Under The Stars performances are from 5 p.m. to 6 p.m., and given demand in years past, arriving early is a wise move.