Starting March 22, Levain Bakery will be selling a limited run of its most recent cookie flavor concoction, Café Con Leche, at its storefront at 351 Amsterdam Avenue, between 76th and 77th Streets. The cookie will also be available at Levain’s other NYC locations, and at its bakeries in Wainscott, NY and Georgetown, DC. 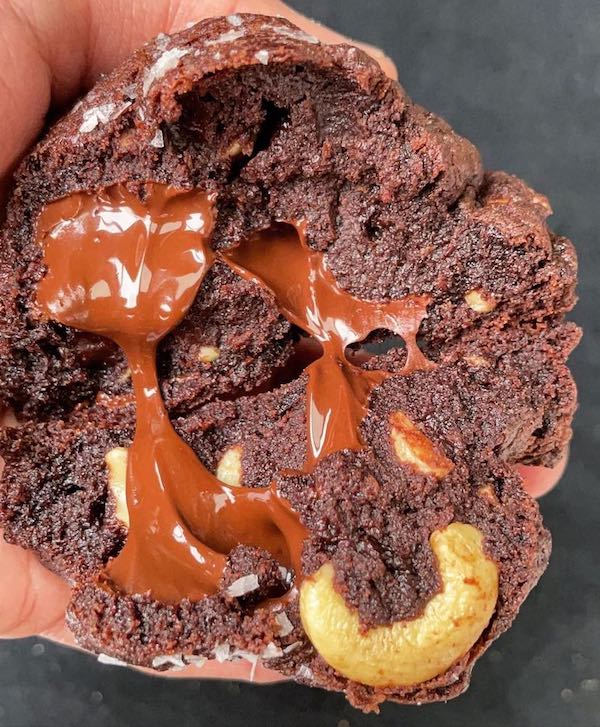 The offering, while being unfamiliar to most of us, has existed in the sugar-butter-saturated Levain-sphere since this past September, when it initially launched as an exclusive for the opening of the bakery in Georgetown, DC, their first location outside of New York.

Levain Bakery originally began in the shoebox-size space on 74th and Amsterdam Avenue when friends Pam Weekes and Connie McDonald craved a baked good satiating enough to curb their ravenous appetites after their intense Ironman workouts. Turns out it was satiating enough to appeal to a larger customer base.

The Café Con Leche cookie was born out of a similar collaboration of friendship and generosity of spirit. This time, Weekes and McDonald teamed up with James Beard nominated pastry chef and co-founder of the Bakers Against Racism virtual bake sale, Paola Velez.

Upon some major recipe development in the kitchen, the trio came up with the Café Con Leche. A riff on Levain’s signature Dark Chocolate Chip cookie, it is studded with cashews, chunks of luxurious Valrhona Café Noir espresso-infused chocolate and caramelized toasted white chocolate with a touch of cinnamon and espresso – all topped with a sprinkle of flaky sea salt and Velez’s brilliance. Fear not: it stays true to its ooey gooey roots. But the overall execution is a rich, warm complex pastry with intricate texture and savory notes – a refreshing departure from the saccharine, often overwhelmingly cloying profile of the sweets that are on offer by the bakery year-round. It is a true homage to the Spanish coffee and milk beverage of the same name – and to Velez’s rich taste nostalgia.

“This cookie was inspired by my grandmother Mama Paulina, she would invite the whole neighborhood to come have a warm meal and a cup of café con leche,” Velez wrote in an Instagram post back in September when the Café Con Leche launched at the Georgetown opening.

The 29 year old, who has worked for everyone from master chocolatier Jacques Torres, Christina Tosi of Milk Bar, to Kith and Kin’s Kwame Onwuachi, is now the executive pastry chef at DC’s Maydan restaurant, and has further established La Bodega Bakery inside Maydan’s sister restaurant Compass Rose. While Velez currently calls the nation’s capital home, her roots stay grounded in the Bronx, where she grew up and where her grandmother instilled in her a deep appreciation for food, as she told Kerry Diamond in an interview for Radio Cherry Bombe.

Velez’s cookie is coming to NYC to delight our taste buds and to give back to both of her beloved cities. A portion of the profits from NYC sales will be donated to Harlem Grown, an independent non-profit organization dedicated to inspiring and nurturing youth with hands-on educational programs centered around urban farming and nutrition education.

Down in the Foggy Bottom, a portion of Georgetown’s sales of the Cafe Con Leche will be donated to Horton’s Kids, just as it did during the store’s opening this past fall. Using research-based programming, the non-profit organization empowers children in Washington, D.C.’s most under-privileged communities to graduate high school and take on success in their collegiate and professional futures.

If you’re looking to try  the Café Con Leche, act fast. The cookie will be sold while limited supplies last. Customers will be able to pick up the cookie at all retail locations in New York (and DC) and online through DoorDash for $4.00 a piece.

Jing Fong on the Upper West Side

Justine Lee is a food writer, recipe developer, and illustrator. She's only a year and change into being an Upper West Sider, having spent most of her New York life in the East Village as a Food Studies undergrad at NYU but has always known her true place was uptown. When she's not wandering Zabar's, you'll find her running and training for her next half-marathon along the Hudson River. You can follow Justine on Instagram and her website.