I used to love looking into the Capezio store on Amsterdam and 69th Street, and dream about when my daughter would be old enough to shop there. Just a few blocks away from the New York City Ballet, the Capezio store served many aspiring ballerinas in the UWS community. Unfortunately, the store closed in the first weeks of this month, and although there are other locations in the city, they do not plan to reopen a UWS location. 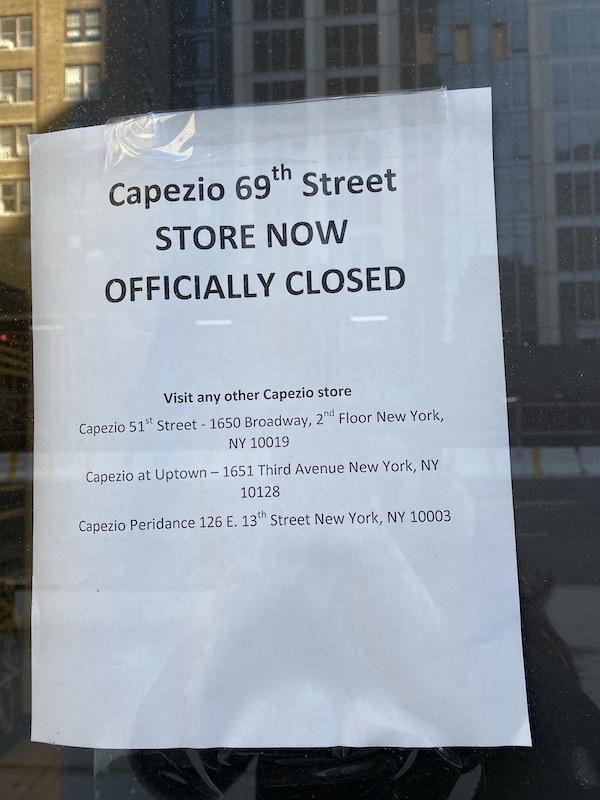 Capezio is a well-known dance wear company that was established in 1887. In 1910, Salvatore Capezio brought his talents from Italy, and settled in NYC to serve as the official shoemaker for the Metropolitan Opera House. According to the brand, in 1920 “the world’s leading ballerina, Anna Pavlova, purchased Capezio pointe shoes for herself and her entire company during her first tour of the United States. Her generous praise of Salvatore’s work ensured Capezio’s success.” To this day, Capezio is recognized as the go-to place for dance shoes, bodysuits, tights, and other apparel. It’s a disappointment that the store is no longer on the UWS to serve as a destination shop and inspiration for dancers. Learn more about Capezio here.

Just a few avenues over on Columbus and 69th Street, Joie also recently closed their UWS location. The contemporary clothing and lifestyle brand does have other locations around the city. Now there are two large retail openings, just steps away from each other.

One thing to note about these closings is that they are not small mom and pop shops.

These are well-established businesses with multiple locations across NYC and the nation. According to the Center for an Urban Future, which has studied retail trends for 12 years, they noted  “a year-over-year decrease in the number of chain store locations for the second consecutive year, and the largest overall decline since this study began.”

The study found that the majority of the closings were in merchandise retailers selling clothing and shoes. Interestingly, the study noted that “even amid that pullback, our research showed that food retailers continued to grow across the five boroughs through 2018. But this year we see notable declines among both merchandise retailers and food chains, with broad-based declines among fast food restaurants, pizza shops, juice bars, ice cream and yogurt chains, and bakeries. The difference is that many other national food chains have continued to expand in the city, while that generally has not been the case for merchandise retailers.”

The study focused on large shoe brands such as Payless and Footlocker, and clothing brands such as Express and Gap. So comparing them to Capezio and Joie isn’t exactly apples to apples. But it does not show a promising trend for the medium sized shoe and clothing shops with multiple locations around the city.

So what will take the place of these empty spaces we now have on the UWS?

According to the study, the category with the most expansion were coffee and tea shops, which added 45 new stores in NYC last year. There were also more gains in the tradition and causal fast food chains. It may not come as a surprise, but Starbucks has more chain stores than any other national retailer in NYC, with 231 locations.

If you are interested in finding out more about what’s driving our businesses to close up and leave the UWS, you can find more information from UWS Save Our Stores. I usually attend their meetings and will continue to post updates. Here is a full summary from the last meeting.