I’ve always loved the quirky M79 crosstown bus route. Going from 79th Street and Riverside Drive to 81st Street and Central Park West, the M79 then travels across the park and on to East End Avenue. Its path has remained unchanged since it began running in 1921.

The M79 does not follow a straight line as it travels east. On the West Side, a detour is required because the grand, 1869 American Museum of Natural History complex occupies the blocks from 77th to 81st Streets from Columbus Avenue to Central Park West. 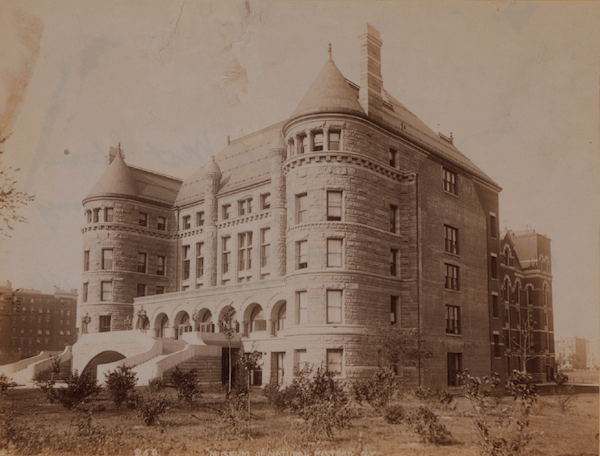 The way east was, and continues to be, a self-directed sightseeing tour. While the route remained the same over the years, the buses evolved enormously as did the process for paying the fare.

Even after air conditioning became widespread for vehicles, buses were not air-conditioned. That changed in 1995. Handicapped accessibility was another significant 1995 MTA innovation. Today, the M79s are among the long, articulated buses that seem to defy reason as they navigate the streets.

In the 1920s, fares were only five cents. It was paid in change. Bus drivers wore a metal change-making device tied to their waists and gave out paper transfer slips.

Fares rose incrementally over the years. According to MTA Info, NYC Transit introduced reduced fares on buses and subways for senior citizens in 1969. All buses required exact fare as payment from this day onward. Bus operators – including the first woman hired in 1975 – no longer made change.

Tokens then became the rule. These later made way for MetroCards, with reduced fares for seniors provided through discount cards.

Starting out from Riverside Drive, the bus may pick up a few passengers. 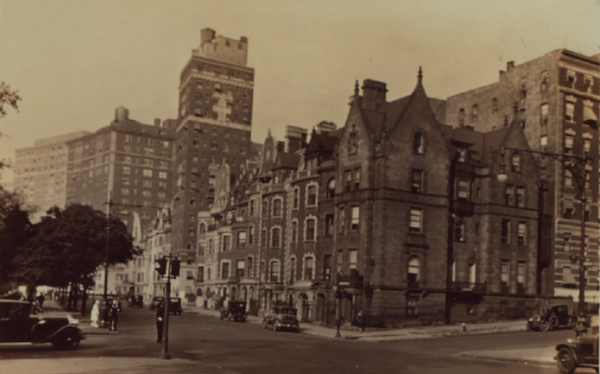 But, the route really begins as groups of passengers climb on as the M79 waits beside the massive Apthorp apartments surrounding an interior courtyard. 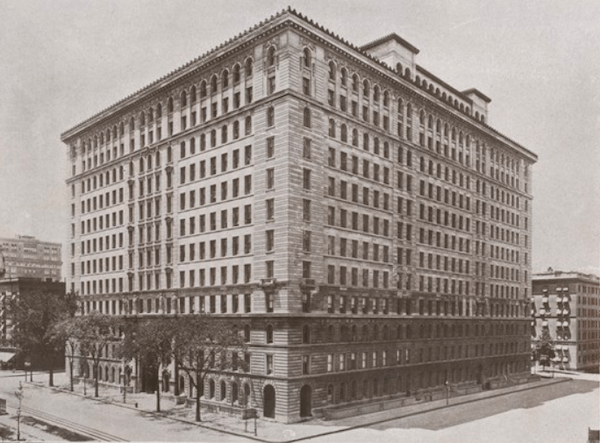 Walking to the bus, I’ve often checked out the shops that were in this distinguished building. In the 1960s, the elegant Apthorp Pharmacy at the southeast corner was already there, as well as a bookstore and a small antique and gift shop. The corner of the ground floor that abuts the 79th Street space has been occupied for a long time by a bank.

Across Broadway from the Apthorp was Babka, a cigar shop and a florist. On the northeast was a two-story building. At first this was Oliver A. Olson’s Department Store, then Woolworths, Filene’s and now DSW. Upstairs, in the 1950s, there was a billiard hall. 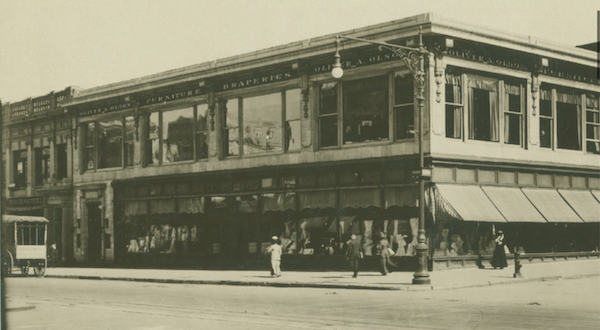 Traveling further toward Amsterdam it was hard to miss the Lucerne’s unusual ornamented facade. Back in the 1960s, the hotel definitely looked as if it had seen better days. Eventually, it was a happy surprise to see it make a comeback with Nice Matin and outdoor seating. When I was growing up, there were only about two outdoor cafes in all of New York City; both were in front of fancy hotels. They were not on the UWS, and were also unattainably elegant. You had to go to Paris or Rome for the cafe experience that later became so usual on Columbus and then on Amsterdam Avenues. 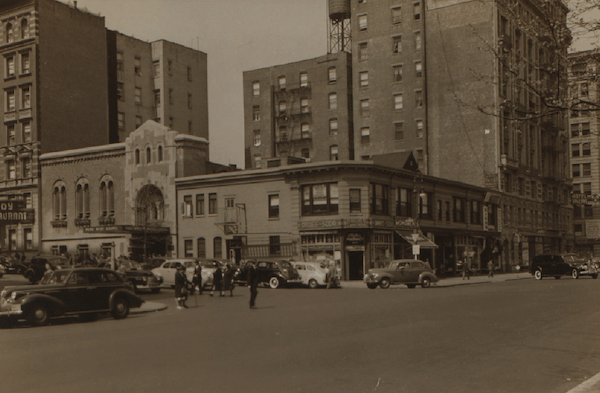 As the crosstown bus turned left onto Amsterdam Avenue, it passed a lumberyard/hardware store that had an amazing number of planks and a variety of woods and dowels squeezed into a tight space. Rounding the corner as it continued east toward Central Park West, the bus went by brownstones that lined both sides of the street. Fifty years ago, these buildings were selling for relatively little. Potential buyers said they were great bargains, and they were, but the challenge was having to wait years before the neighborhood was fully safe. 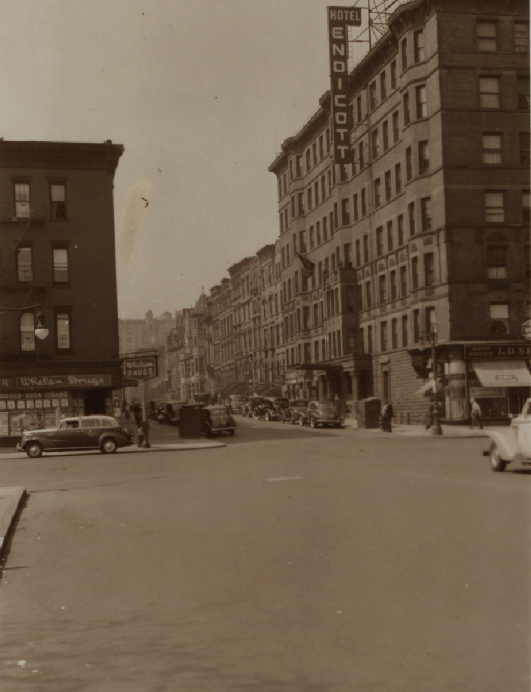 Upscale in its day, the Endicott was built with a stunning, glass-roofed palm court. The hotel has a drama-filled history. More recently, over the last 40 years, the ground floor has been occupied by numerous businesses. I had a look at the space when its fortunes were on the upswing in the early 1980s and celebrity film producer Dino De Laurentis transformed the onetime Palm Court into DDL Foodshow, a gourmet food shop.

The Colonial Hotel (now The Galaxy, at 51 West 81st Street) was once home to a pharmacy housed inside the lobby. The corner store with a distinctive rounded entry was occupied by the then very trendy Charivari fashion boutique. 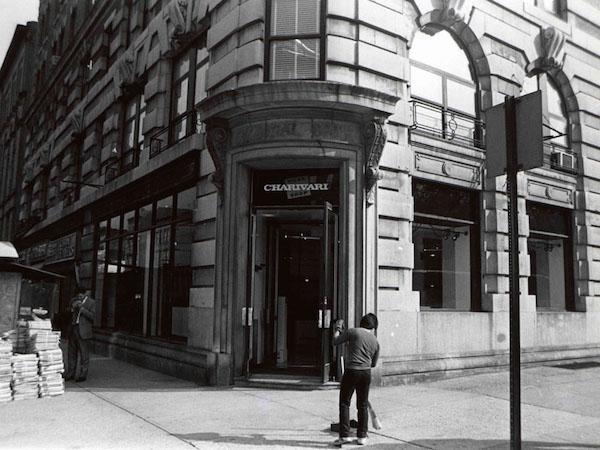 Further down toward Central Park West is the Excelsior Hotel. From about 1940 to the mid-1990s, it had a very, very popular coffee shop. Customers were hosted by a lively, charismatic cashier. The booths were pink. The current receptionist said that although long gone, “people keep coming in asking for “the coffee shop” that one entered through the hotel lobby.

Right across the street was the Hayden Planetarium. On a third grade trip we gathered around a large chunky meteorite. A museum staff member told us we could sign up for “a trip to the moon,” which was then, just becoming a possibility. 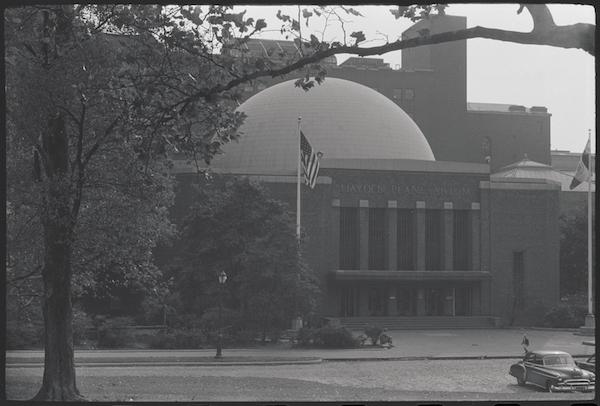 The Impressive Women of The Calhoun School’s Early Days