Since 2005, the Marlene Meyerson JCC Manhattan has celebrated the Jewish holiday of Shavuot with its Tikkun Leil Shavuot, opening its doors to more than 3,000 people for a free night of study, dance, song, wine tastings … and cheesecake. This year will be just a little different; instead of the community coming through the JCC’s doors, the JCC will come through the doors–or screens–of the community. And if you want cheesecake, that’s up to you. 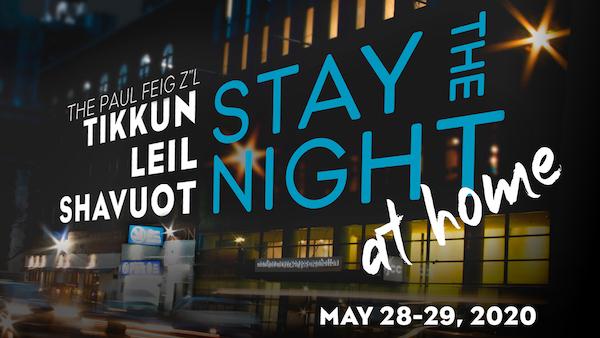 Highlights of this year’s Tikkun Leil Shavuot – which will be broadcast live via Zoom, from 9pm on Thursday, May 28th to 5am on Friday, May 29th – will include an opening performance, conversation, and community sing-along with social-music initiative Koolulam at 9 pm; live performances from home by Israeli singers Idan Raichel at 1am and Noa, whose 3am concert will be the closing event; conversations with prize-winning Israeli-American author Ruby Namdar and Anna Winger, creator of the Netflix series Unorthodox; JCC Social Justice Activist in Residence Ruth Messinger; and many others. Multiple programs will be offered in each time slot, and you can choose to pre-register or drop-in.

Tikkun honors the memory of Paul Feig z”l, who died in a car accident in 1998. Feig was the brother of a long-time JCC board member.

Shavuot commemorates G-d’s revelation of the Torah to the Jews on Mount Sinai. Today, many Jews around the world celebrate this holiday by staying up all night and studying Torah. In past years, the JCC has invited the community to participate in formal study, dance, films, movement classes, and, of course, cheesecake.

This year’s lineup of programs and speakers will “explore how to celebrate a pilgrimage holiday when people can’t go anywhere, can’t gather, and express gratitude during a pandemic,” says Rabbi Abigail Treu, director of the JCC’s Center for Jewish Living.

As in other years, this year’s programs cover a range of topics to appeal to Jews of all backgrounds, including Harry Potter as a Sacred Text, Biblical Metaphors and COVID-19, Jewish Agriculture, The History of Israeli Fashion, Electoral Politics and the Jewish Obligation to Advocacy, and a Regendered Bible.

The JCC invites you to stay an hour, two, or all night long for this UWS Shavuot institution. We’ll bring the revelation, you bring the cheesecake!