Sometimes captivating the eye, sometimes peeking out unexpectedly, the statuary of Central Park—or at least the Upper West Side’s share of it—entertains, educates and engages walkers, bikers and drivers alike.

No road or path bisects the park into east or west. So, what makes a statue, fountain or landmark an “Upper West Side” possession? My criteria is pretty simple. Check out this map of Central Park with statue locations on it. If a piece looks to be on the park’s west side, it belongs on my list.

Starting from the south, let’s begin with the stunning Maine Monument at the Columbus Circle entrance, known as the Merchants’ Gate. The monument, with its ship’s prow and beautiful gilded figure, honors 260 U.S. sailors who died in Havana harbor when the battleship Maine mysteriously blew up. No one still knows what happened. A month after the February 1898 explosion, Spain declared war on the U.S., and a year later a treaty ending the conflict freed Cuba from Spanish control and made U.S. possessions of the Philippines, Guam and Puerto Rico.

Flamboyant publisher William Randolph Hearst led efforts to raise money for the monument which features the gilded figure of Columbia. Rumor has it that figure is cast from guns salvaged from the Maine itself. 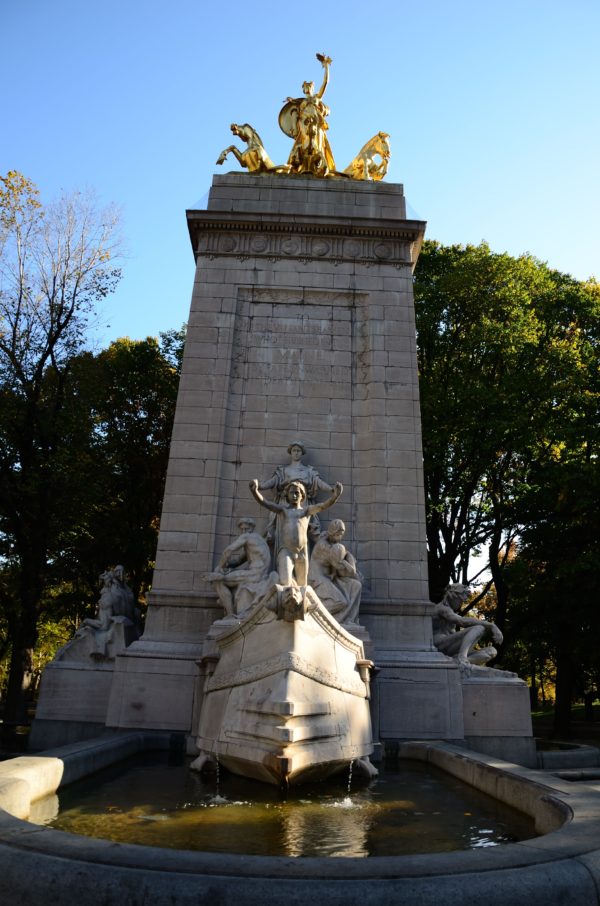 By the Sheep Meadow west of West Drive near 68th Street, the Italian philosopher and patriot Giuseppe Mazzini is remembered with a bust. Mazzini died in 1872 after years of working to unite Italy. He was remembered with the statue in 1878. The piece’s inscription reads “Thought and Action” and “God and the People.” 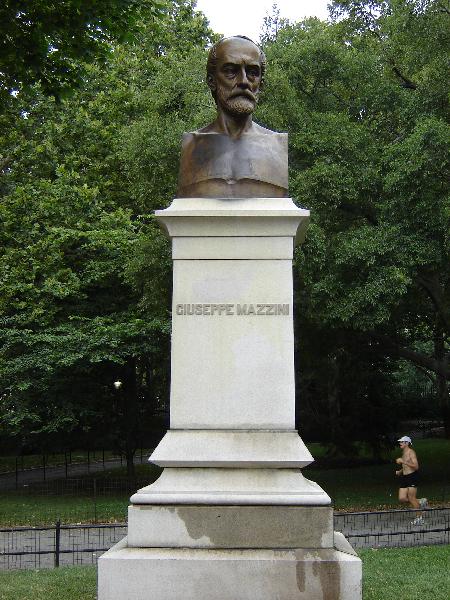 Just up West Drive at West 69th Street sits the 7th Regiment Memorial marking the 58 Civil War deaths from that unit. A sculptor with an All-American name—John Quincy Adams Ward—created the piece in 1874 sowing a soldier with his weapon. Members of the regiment paid for it. 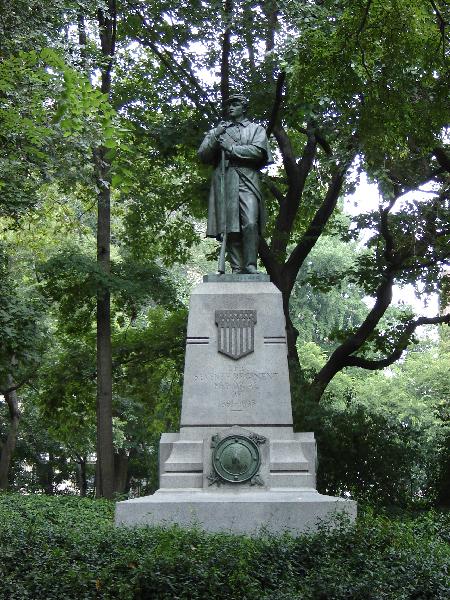 At West Drive and 72nd Street is the Daniel Webster statue, memorializing the revered senator. It was supposed to go on the park’s mall but was so big it was out of proportion to other works. The statue, by Thomas Ball, is a large version of small statue of Webster he made that proved so popular it was patented and sold all over the country. 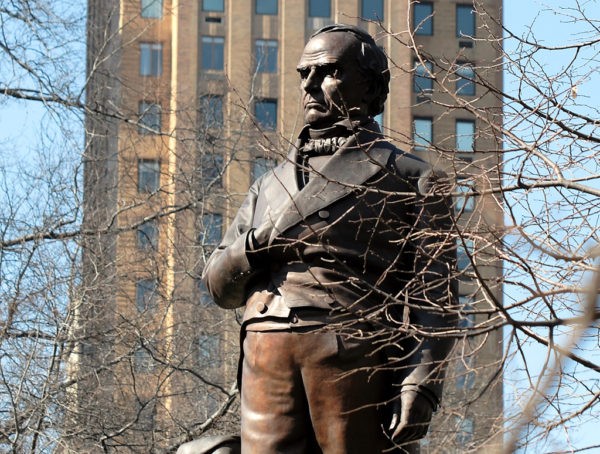 Nearby and just west of the stunning Bethesda Terrace with its Angel of the Waters Fountain sits the Cherry Hill Fountain. Often overlooked and recently refurbished, it’s a hidden jewel. By its resemblance, though on a smaller scale, to the Angels fountain, it’s no surprise the designer of the terrace designed the Cherry Hill Fountain, too. Recently refurbished and in the middle of a roundabout, it initially had a very practical use: a watering trough for horses. 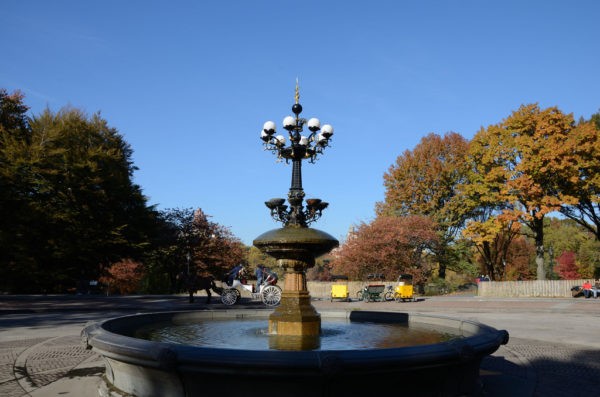 Not far from the fountain, in fact, just across 72nd Street is my favorite statue on Central Park’s west side—The Falconer. It shows a man with arm raised and a falcon, wings spread, alighting. This piece is resilient. After vandals damaged it in 1957, it was removed, but restored and returned in 1985. 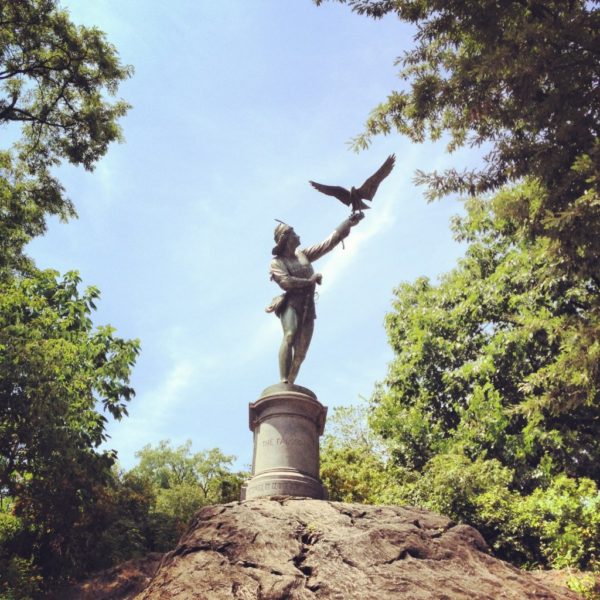 Not many people have heard of the Charles B. Stover Bench at Shakespeare Garden near 80th Street. Maybe you know it as the “Whisper Bench.” Sit at one end of the large granite, semi-circular bench and your whispered conversation can be heard by someone sitting at the opposite end. 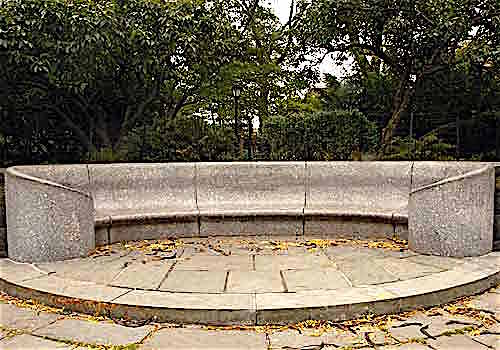 Nearby at the Delacorte Theater, where Shakespeare in the Park takes place, statues from The Tempest and Romeo and Juliet keep watch. The modern art pieces are simple and whimsical and a delight for many Central Park fans. Learn more about the Delacorte here: http://www.publictheater.org/ 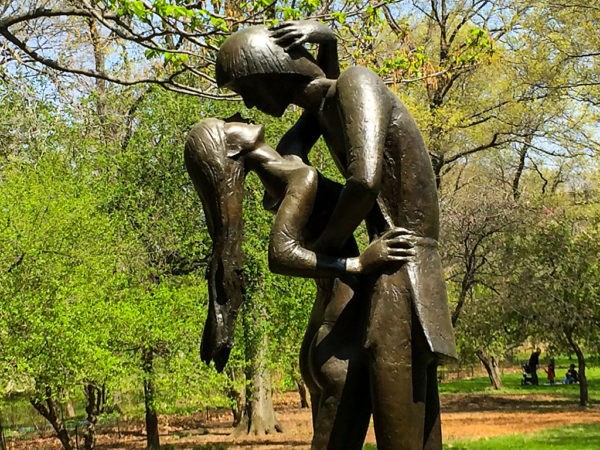 Saving the most known for last—even if it’s a bit out of geographical order—is the “Imagine” mosaic in the Strawberry Fields Memorial. Dedicated on the what would have been John Lennon’s 45th birthday in 1985, the area of the park was named for his song Strawberry Fields Forever. Lennon’s wife, Yoko, helped guide design of one of the park’s designated quiet spots. The city of Naples, Italy, gave the park the mosaic. 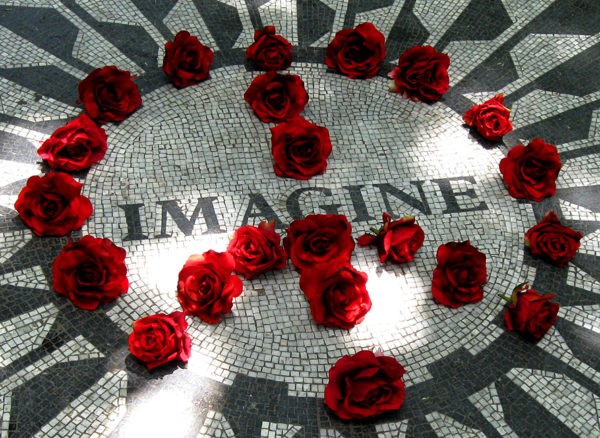