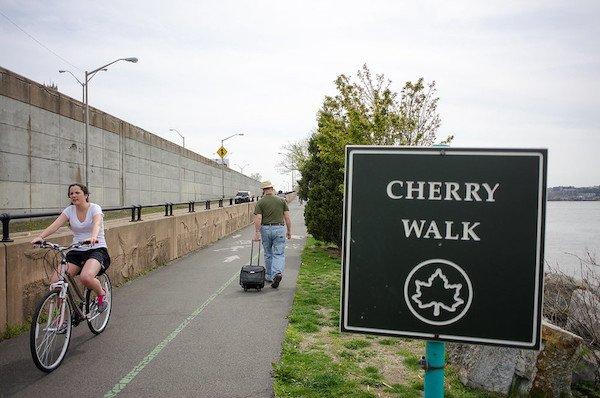 The NYC Parks Department has announced it will be temporarily closing Cherry Walk path in Riverside Park between 100th and 125th Streets. The closure will begin on Monday, September 28. The Parks Department released the following statement on September 18:

“Out of an abundance of caution, and due to planned shoreline and path reconstruction work, NYC Parks has announced that it will temporarily close the Cherry Walk path in Riverside Park from W. 100th to W. 125th streets. The closure will begin Monday, September 28.

“To accommodate pedestrians and cyclists, Parks will post signs at related path entrances, south and north of the greenway, notifying them of the detour path. Visitors will be directed to exit the greenway at 100th St. to access alternative paths and local streets. Cyclists may re-enter the greenway at West 153rd Street and Riverside Drive via the Herman “Denny” Farrell Pedestrian Bridge. Pedestrians may re-enter via steps at Tiemann Place that connect Riverside Drive to St. Clair Place.

“The Cherry Walk is slated for necessary safety and infrastructure work as part of a $1.5 million FEMA-funded reconstruction to address damage caused by Superstorm Sandy in Riverside and Fort Washington parks. The project will restore the vulnerable shoreline and repave the path, providing a safer and smoother biking experience.

“The Cherry Walk will be temporarily closed until further notice.”

Magnolia Bakery Will Use High Tech Products To Fight Coronavirus