There was standing room only at the recent CB7 Preservation Committee meeting. People were eager to see the plans CMOM has set forth on, including a rooftop deck with views of Central Park. Many community members were there to urge the committee to reconsider the proposed changes.


Leslie Burshara, the Deputy Director of Education and Exhibit at the Children’s Museum of Manhattan, began the meeting giving a recap of the past and the potential future for the museum.

“The Children’s Museum of Manhattan was founded in 1973, by educators and artists in response to a lack of artist education in the school system. Today, the current museum serves 350,000 visitors a year. Those are visitors from all five boroughs, as well as tourists. We also welcome each year 50,000 low resource families for free, or reduced membership to the museum.”

Leslie went on to describe the deep roots that CMOM has to the UWS and that she is thrilled the museum will be staying in the neighborhood at 1 West 96th Street, the former First Church of Christ, Scientist. Leslie described the work CMOM does with underserved communities, including homeless shelters and the Department of Corrections.

“It is a very unusual partnership with the Children’s Museum, the first of its kind, and it’s a national model, where we bring currently incarcerated mothers to the museum once a month to be reunited with their babies and their children. I just wanted to share some of the special work that we do with you and that we will continue to do in the new building.”

Jane Macintosh, the Chief Advancement Officer, spoke about the journey it took to get to this new building.

“Our journey to this point actually has been going on for over a decade.  The museum leadership has been looking at a wide range of potential locations for our future home and we came to this one with incredible excitement and large measure because of the enduring nature of the building, it’s incredible beauty, and of course the education opportunities that it presents to really help us elevate our mission in the long term.”

Many people may not know that the museum currently rents the building they are located in, 212 West 83rd Street. 1 West 96th Street will be their new, permanent location. Jane noted the importance of the buildings proximity to public transportation and Central Park.

Recommended: A Summary of the Recent “UWS Save Our Stores” Meeting

As for the financial undertaking of the project, the goal is to raise $200 million. So far, they have raised $60 million from government and private resources.

Even with all of this good work being done, CMOM realized that by moving into a historic building, they would have to be sensitive to the surrounding community.

CMOM leadership has asserted that they have spent a great deal of time meeting with the neighboring buildings, and have made efforts to keep everyone in the loop on developments.

Sylvia Smith, senior partner at FXCollaborative, spoke about the following changes: removing all the original exterior wood doors, removing the original granite steps, and removing all the stained glass. She also detailed what the addition of the roof deck would look like as well as adding two stories of mechanical equipment to the roof. 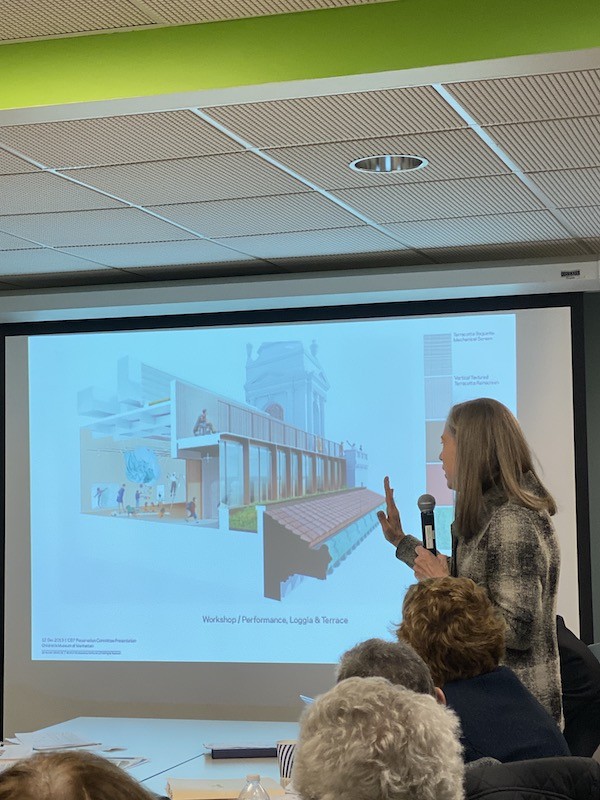 “This a very poetic and beautiful space. And as we’ve been considering the building, we’ve been looking at ways to maintain the overall quality. We’ve looked very carefully at the museum’s program, and have worked carefully to come up with strategies to lay out the program in the building.”

With all of the information given, the public was invited to comment. There were mixed reviews on the proposed changes.

Arnold and Debra Bank live nearby at 7 West 96th street. They support the presence of CMOM and the efforts to restore the church. However, they strongly object to the architectural plans that have been presented. In a statement submitted to the committee, Arnold wrote the following:

“The proposed additions to the roof are several boxy clumps plunked down onto the church’s roof, and are readily viewed from 96th Street, CPW, the park itself, and 97th Street.  Moreover, these clumps violate the integrity of this landmarked building by obscuring the church’s curious, delightful copper outcrops that were purposefully designed into the central and rear roof.  The clumps also clutter the view of the base of the steeple from north, west, and south, drawing attention away from the fabulous grillwork at the base, rather than drawing the eye up toward the steeple itself.”

Living next door, they also say that it violates the beauty and integrity of the buildings surrounding it, which were built to complement the church’s design. Both Arnold and Debra are eager to be supportive of CMOM, and to be a good neighbor, but they wish for CMOM to be the same.

Community member Dr. Deborah White, as well as other members from Fresh Start New Beginning Christian Church, believe that these changes should not only be denied, but that the building should return to its original purpose, a house of worship. Dr. White has been a member of the UWS community for 38 years and stated the following:

Not everyone was against the changes. Robert Stone, who lives right across the street from the church, is very excited for the proposed changes.

“It’s one of the reasons why I moved to the 360 Central Park West, because [CMOM] is going to rejuvenate the area. They’re taking a deteriorated old building and fixing it up. They’re going to bring new business in. Otherwise, what do we have? An old building that’s going to sit, all because everyone’s going to constantly say you can’t do this, you can’t do that. And then, the homeless will end up living there. It will be a mess. Or it will be knocked down and a 40 story high rise glass building will replace it. I think it’s great. I don’t know why everyone’s giving it such a problem.”

The committee concluded the meeting by adopting a protective resolution of disapproval for all of the proposed changes. The committee invited CMOM back to present a new plan in January. The resolution will be tabled if CMOM returns with a new presentation. Mark Diller, the chair of CB7 stated in an email, “The hope is that a revised presentation will find favor with the committee so a positive resolution can be referred to the CB7 full Board in February.”

Tags:Children's Museum of Manhattan, Community Board 7