Beginning Sunday, August 29, the Columbus Avenue Business Improvement District (BID), in partnership with the NYC’s Department of Transportation’s Open Streets program, will be opening 9 blocks of Columbus Avenue between 68th and 77th Streets.

These streets will be ‘open’ every Sunday from 10am to 9pm until November 14. Traffic and parking will be redirected during these times, with informational signage posted throughout the area to alert the community to these temporary changes.

For the first couple of weeks, the BID will concentrate on getting the surrounding community accustomed to the streets being pedestrian zones. Street Team members, outfitted in high visibility vests, will monitor the streets making sure barricades stay in place and visitors stay safe. After that, Columbus Avenue will begin programming the 9 blocks, to create a festive atmosphere that fosters business recovery, sustains foot traffic, and encourages community development. 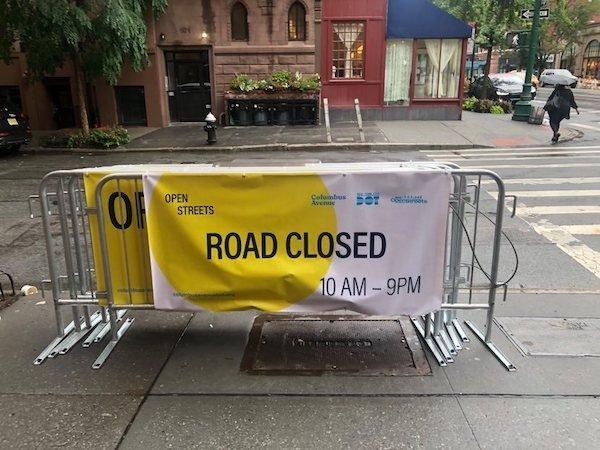 Columbus Ave BID gets ready to barricade the streets this Sunday. Photo by Bobby Panza.

Upper West Siders have expressed mixed feelings about the pedestrianization of streets since the initiation of the program.

Some like the concept in theory but feel that in past renditions, the signage could have been made clearer (so that drivers wouldn’t get confused and accidentally drive through barriers). Some drivers (and passengers) have argued that with access to two public parks, it seemed unnecessary to create more space where cars can’t drive. And some who depend on food delivery services have also expressed frustration over forced reroutes.

Those in favor of the Open Streets initiative have expressed appreciation for the extra space they’ve been given to bring their kids, bike and run. Advocates have also been happy with the reduced noise and (actual) pollution, in addition to the offshoots which have been created: Open Boulevards, which aims to “create dining destination experiences throughout the city”; Open Culture, which allows cultural institutions and entertainment venues to bring performances to the streets; and Open Storefronts, which was created to give retail store owners sidewalk space to sell their goods.

“We are thrilled to bring Open Streets to our neighborhood,” says Nicole Paynter, Executive Director of the Columbus Avenue BID. By opening a portion of the avenue to Open Streets, our restaurants and retail businesses will have an opportunity to draw more visitors and area residents out to support their ongoing recovery. We have seen the Open Streets program be extremely successful in other neighborhoods, and we are excited to embrace the many possibilities Open Streets provides, here on Columbus Avenue.”

Having re-signed a lease this past year, and taken over ownership of the bistro he managed for 17 years (Bistro Cassis at 225 Columbus Avenue between 70th and 71st Streets), Manny Colon is also excited about the initiative. “I am fortunate to have regulars that come in a few times a week, and would say we are half-way back to normal. But until we start to get more visitors, and more people back into the city, we are still just surviving. I think Open Streets will bring people to the Upper West Side, which will not only give me more area to serve guests, but will also give us more exposure as well, especially on Sundays during brunch,” said Manny Colon, owner of Manny’s Bistro.

For more information about Open Streets on Columbus Ave, visit columbusavenuebid.org or @columbusavebid on Instagram.