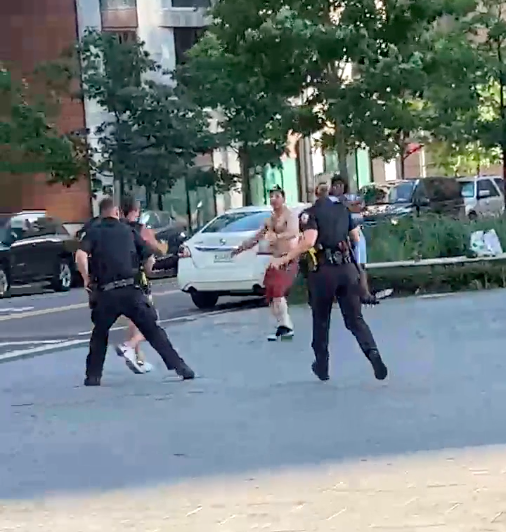 Cops zero in on their suspect in Lincoln Square this weekend. Photo c/o Citizen.

At about 5:15pm on Saturday, the NYPD received a call about a disorderly person “in the rear of 400 West 61 Street,” which is located between Riverside Boulevard and Freedom Place South.

Police say that when they arrived, a 37-year-old female told them a man had exposed himself in public.

The man, 43-year-old Larry Nicholas, was arrested and charged with public lewdness.

Video shared on Citizen App shows the man in what appears to be a verbal altercation with two other men before he is arrested.

During this altercation, a woman can be scene running to the cop car. Soon, two officers handcuff the suspect, and the crowd of onlookers burst into cheers.

The person who took the video said “they’re fighting” and “that guy without the shirt on was getting punched,” but it’s hard to detect any exchange of blows during the short clip — and these details were not included in the NYPD’s report.

The only thing that’s truly clear from the (very choppy) video is that the man did get handcuffed, and the crowd did cheer when it happened …

According to public court records, Nicholas was also arrested on January 3 and slapped with a slew of charges including assault and aggravated harassment. It is not clear what exactly led to these charges, but he’s due in court for that case on July 8.