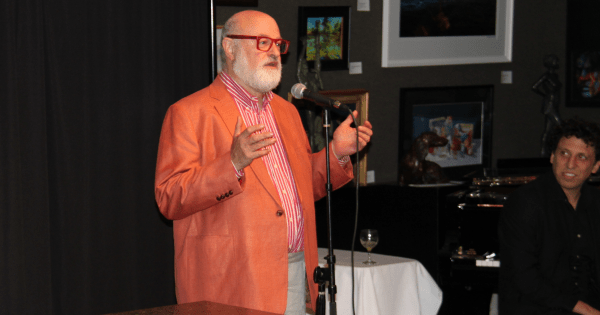 Photo by Greenwich Village Society for Historic Preservation via Flickr

Ed Schoenfeld, who was a driving force in introducing New Yorkers to the delights of Chinese regional cooking, died on Friday at the age of 72 after battling liver cancer. The Brooklyn native, whose most recent venture was RedFarm, with its playful Pan-Asian cuisine, helped open some of the city’s top Chinese restaurants over the decades and was dubbed “a walking encyclopedia of Chinese food.” And it all started on the Upper West Side.

“I must have been 11 or 12 when I first went to the Great Shanghai on Broadway and 102nd Street,” he told Serious Eats in 2018 (this interview is a must-read for those interested in Mr. Schoenfeld’s personal history of Chinese food in New York). “I remember having my first spring roll! Not an egg roll — this was thinner and more delicate.” Schoenfeld started dining weekly at Shun Lee Dynasty, which was the first Chinese restaurant to receive four stars in the Times, and ended up studying with cooking teacher Grace Chu and organizing banquets with top Chinese chefs, according to his New York Times obituary.

He caught the attention of top Chinese chef David Keh one night when he ordered a rarefied carp’s-head soup at his restaurant, the Times writes. He befriended Mr. Keh and in 1973 helped him open Uncle Tai’s Hunan Yuan, one of New York’s first Hunan restaurants, in the East 60s. With a beard worthy of Jerry Garcia, he worked the front of the house where he hobnobbed with celebrity customers. That restaurant became the second Chinese restaurant, after Shun Lee Dynasty, to receive a four-star rating from the Times.

Schoenfeld then worked with chef Michael Tong at Shun Lee Dynasty on the East Side, and Shun Lee West on West 65th Street. He operated other storied eateries in the 1970s and 1980s, including Auntie Yuan, and Pig Heaven, both on the East Side.

In a 2011 interview with Eater, Mr. Schoenfeld spoke about how changing immigration laws in the 1960s led to wealthy Chinese people moving to the U.S., along with their chefs. “That is when we first started having Szechuan cooking and Hunan cooking,” he said. Prior to that, most of America had known just Cantonese-style dishes like chow mein and sweet and sour pork.

In 2010, he opened RedFarm in Greenwich Village, partnering with restaurateur Jeffrey Chodorow to create a crowd-pleasing “farm-to-table” Chinese restaurant with Hong Kong-born Joe Ng as chef. They opened the Upper West Side outpost at 2170 Broadway, at 77th Street, in what is now the Arthouse Hotel, and another branch in London. After decades in the hospitality industry bringing us the authentic tastes of China, Mr. Schoenfeld decided to have a little fun with RedFarm. He once described the restaurant, with dishes such as pastrami egg rolls and “Pacman” dumplings, as “unabashedly inauthentic.”