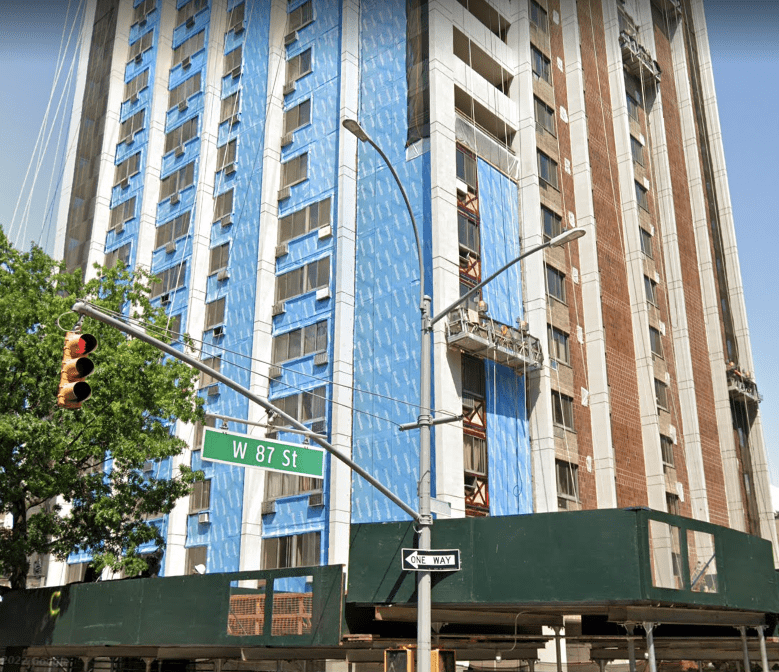 Tenants at Glenn Gardens have officially scheduled a rally to demonstrate against their landlord, A&E Real Estate Holdings LLC, after a landlord-tenant meeting last week yielded little more than a stalemate.

The rental community at 175 West 87th Street on Amsterdam Avenue is heading into its third year of construction. As the work barrels along and the dust continues to build up, tenants brace for both lobby and basement renovations that may go on for another two to three years after the window wall projects nears its end in late 2022 or early 2023.

Residents were hopeful that a sit-down between the landlord and members of its Tenants Alliance would glean some progress, that some of its demands would be met, and that their rally would not be necessary. But their hopes were dashed, according to co-chair of the renovation committee, Tuck Milligan.

He and John Clifton, vice president of the Tenants Alliance, met with landlord Douglas Eisenberg, building manager Louis Cutri, and A&E executive team member Maggie McCormick on August 18. Despite meeting for about an hour, it became clear to Milligan that A&E did not want to talk to the community about its demands.

“We wanted to talk about compensation due to the continued lack of amenities use and out of pocket expenses related to the construction like air filters, cleaning products, daycare, etc.,” said Milligan. “But [Eisenberg] didn’t want to talk ‘at this time.’ He wanted us to be apartment specific and it was obvious that he doesn’t want anyone going through the Tenants Alliance.”

Milligan told ILTUWS that Eisenberg did make one concession. “He agreed to reimburse pet owners for pets who got sick from the dust or had to be moved due to renovations. He said he has a soft spot for dogs. So he acknowledges the construction was a problem for pets but does not think the same applies to humans.”

One such human who got sick is Annette Perel, a longtime resident of Glenn Gardens. She fell ill one night during the waterproofing stage and was effectively knocked out cold from 7:30 p.m. until the following morning without waking once. While she did feel better thereafter, her concerns about the ongoing construction have not been ameliorated.

“Someone broke into my apartment.” Perel told ILTUWS that on the day of the summer solstice, the building reached out to her to confirm when she would be home so that the construction team could access her apartment. She informed them of a specific time and expected to let the workers in when she returned. But instead, she found her plants and humidifier moved.

“I filed a police report. There is no way they could have moved the plants from my windowsill onto the table without physically coming into my apartment,” Perel said. “The construction supervisor told me that the workers reached in from the scaffolding to move the plants without coming in. But if they did that, they would have knocked over my humidifier which was also moved from its normal place.”

Perel confirmed that the supervisor remained steadfast in his denials but that he admitted not waiting for her to return home. “I asked them why they didn’t wait for me. They told me that they couldn’t wait because of their deadlines. I’ve lived here for forty years and now I no longer feel safe.”

An A&E spokesperson reported to ILTUWS that “building management reached out to the resident immediately upon hearing about this issue and notified all subcontractors that they are never permitted to reach into a resident’s apartment through a window. A&E maintains a strict policy that no apartment can be entered without a resident’s permission.”

She intends to join the rally this weekend, as does Milligan. The demonstration was initially planned for August 14 but will proceed on Sunday, August 28 at noon.

Milligan advised that anyone planning to join should meet in front of Glenn Gardens at noon. From there, the group will head to Amsterdam Avenue before moving up to the southeast corner of West 88th Street and Amsterdam.

As for A&E, the spokesperson reiterated that it believes the ongoing work, specifically the “bigger windows in their units and renovated common areas and amenities open to everyone” will benefit every resident. It acknowledged that the “construction has created noise and disruption that’s been difficult at times, and we’re working hard to resolve any outstanding issues. The most extensive work is over, and we expect it’s going to be a lot quieter and easier for everyone from here on out.”

The spokesperson also addressed the tenant meeting with the landlord.

“A&E’s senior leadership met with residents directly to hear them out, pledged to immediately resolve any outstanding construction-related problems, and made clear they would consider requests for additional improvements. We’ll continue those discussions in good faith, rally or not.”

However, A&E felt that Milligan mischaracterized that the landlord wanted only the issues brought to Eiseneberg’s attention to be apartment specific and that he does not want the residents going through the Tenant’s Alliance.