Notably one of the Upper West Side’s most infamous buildings, the Ansonia, located at 2109 Broadway between 73rd and 74th Streets, was home to quite the famous crowd and was privy to a lot of outrageous (for lack of a better term) sh*t. 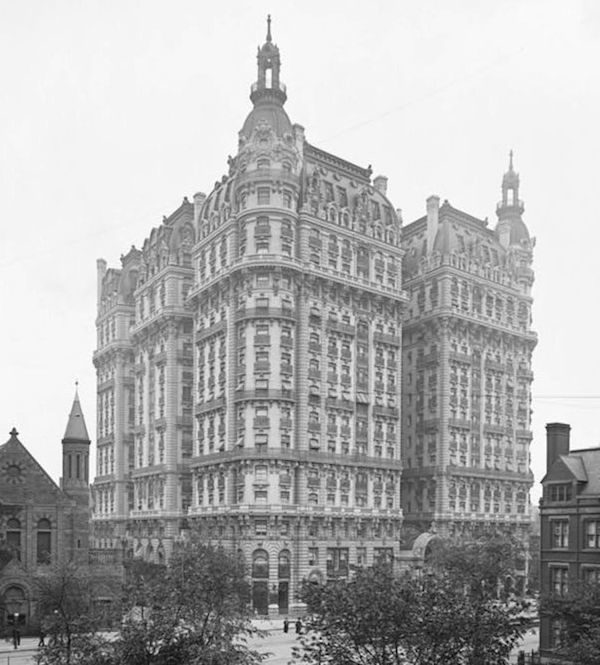 Here are just a few things that make the Ansonia building an absolute legend on the Upper West Side (and the world, duh):

The Ansonia Had an Actual Farm in The Sky

The building’s owner really set the tone for the Ansonia’s weird existence. It was built by William Earle Dodge Stokes, who established a small farm on the roof of the building. That’s right. This man (sorry, icon) built a FARM on top of a seventeen-story building that had chickens, ducks, goats, dairy cows, and a bear on it. However, the Department of Health shut it down in 1907. What a bunch of narcs.

The Chicago White Sox first baseman, Chick Gandil, had an apartment at the Ansonia. He was a key player in the 1919 Black Sox Scandal. According to the book Eight Men Out, Gandil held a meeting with his White Sox teammates in his Ansonia apartment to intentionally scheme on losing the 1919 World Series. Whoa. Heavy stuff.

It Once Had a Burlesque-Club-Bathhouse Situation

In 1968, The Ansonia had a luxurious gay bathhouse that had palm fronds, a discotheque, and candy machines that dispensed lubricants. Best of all, it had a glamorous cabaret that Bette Milder, known as “Bathhouse Betty”, would frequently sing in. So, picture this: half-naked people frolicking around in towels and dancing to Bette Milder’s theatrical voice. If this doesn’t scream legendary then all is wrong in the universe.

Since this sky-farm-turned-burlesque-bathhouse era ended, the Ansonia is simply a luxury residential property now. Boooo. Celebrities such as Babe Ruth, Angelina Jolie, Macaulay Culkin, and countless other notable names have once lived there, too. But here’s to hoping more legendary things happen here.