Complaints of fireworks have skyrocketed throughout NYC this month. According to city data, there have now been over 2,500 fireworks complaints in June – compared to just 21 during June 2019.

Regardless of where you live – UWS or elsewhere – you’ve likely been hearing these loud booms almost every night, frequently lasting well past midnight.

Here’s a photo that was sent to us by Millicent Broderick, displaying a pretty professional looking fireworks display around midnight at 104th and Columbus Ave. 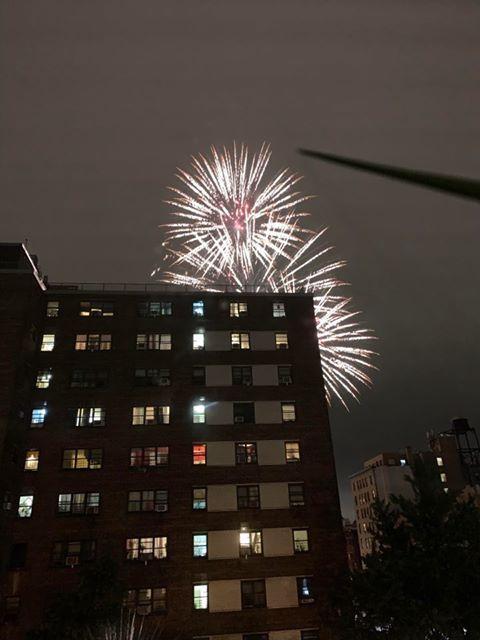 There doesn’t seem to be a definitive answer to why its occurring. Some think its an extension of the recent protests, others believe it may be the result of cabin-fever and boredom. And many people are wondering how so many have gotten their hands on these illegal fireworks.

Increased complaints of fireworks have also been occurring outside of NYC, in locations including Boston and Syracuse.

We’ve reached out to people who live in all sections of the Upper West Side, and most have confirmed hearing many late night booms.

We’ve also sent inquiries to Linda Rosenthal, Helen Rosenthal and Gale Brewer, and have left a voicemail with the 20th Precinct.

As of now, we’ve heard back from the office of Helen Rosenthal; a representative stated that “This is happening across the city and it’s important that folks call their complaints into 311. The NYPD has to catch someone in the act of setting (off) fireworks, which is not an easy thing to do.”

In the meantime, if you’ve been having trouble sleeping and want to vent, please feel free to do so in the comments below. Or to submit a photo or video, please email us.