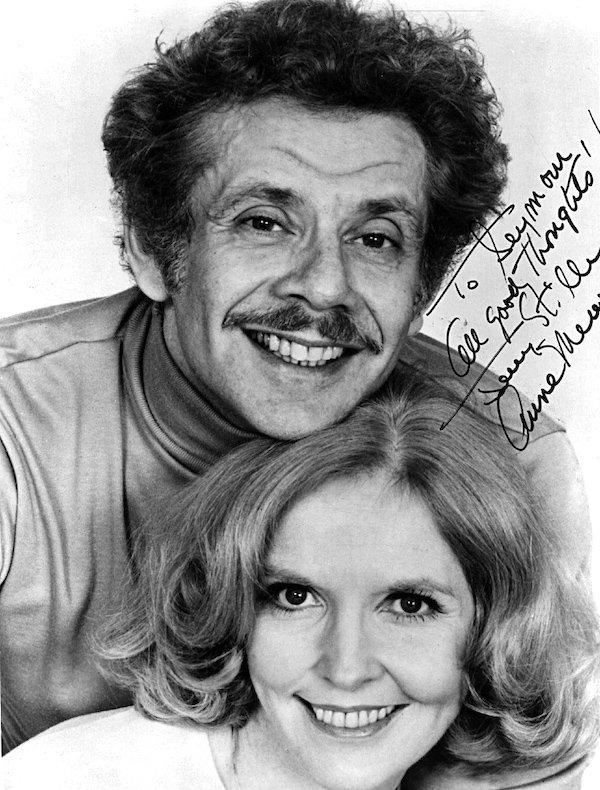 Publicity photo of Jerry Stiller and Anne Meara with an autograph, 1965 [public domain]

The Riverside Drive apartment shared by late couple and comedy duo Jerry Stiller and Anna Meara hit the market for the first time in over 50 years back in July, the New York Times first reported at the time.

Now, the 10 room home asking $5 million is in contract, according to the Streeteasy listing which was updated on October 19.

In 1965, Stiller, Meara and their first child Amy moved from Washington Heights to 118 Riverside Drive, between 83rd and 84th Streets. Their second child (and second to become an actor), Ben, was born shortly after. At the time, the building was a rental, and they were paying $220 per month.

“I think my dad always wanted to live on Riverside Drive as a kid growing up very poor on the Lower East Side,” Ben Stiller wrote to the Times earlier this year.

After the building converted to co-op several years later, the comedy couple purchased the unit. In the early ’80s, they bought the apartment next door and combined them to create a 3,700 square foot, five-bedroom, three-and-a-half bath home with two kitchens and a staff room.

The home, which comes with a hefty monthly maintenance of $7,593, also features a library with built-in bookcases; a private elevator landing; and a sauna and Jacuzzi which Stiller and Meara added.

“Many of the rooms are still adorned with personal photographs and memorabilia from a bygone era in entertainment,” the Times writes, including an artist-commissioned painting of the legendary couple, which Ben gave to them as a gift.

The listing agents are Bruce Ehrmann and Andrew Anderson of Douglas Elliman.

The Times notes that Ehrmann also helped Ben Stiller and his wife, actress Christine Taylor, buy and sell their own duplex at 118 Riverside Drive.

The Penthouse At Two Waterline Square

The History of The Broadway Fashion Building