Well that was quick. Freshly Bagel just opened in January, and a sign posted in their window this morning indicates they’ve closed. 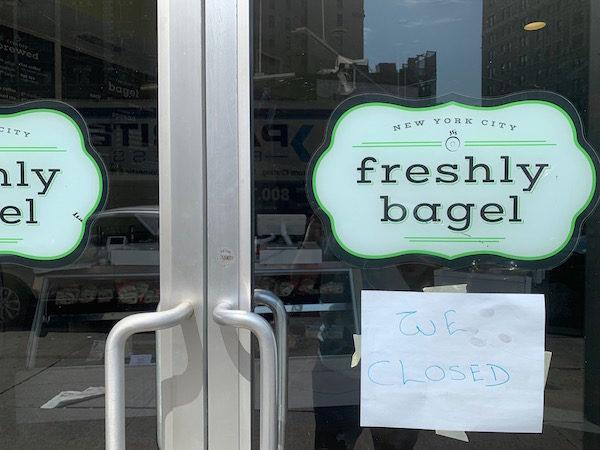 Maybe they took the right approach with their very direct “WE CLOSED” sign, instead of “thanking the Upper West Side” for all of the months of loyal patronage.

Freshly Bagel had replaced Gigi Cafe which closed towards the end of 2018. Gigi had been open since 2007, and people were quite upset to hear about their closing.

Another one bites the dust. Link in our bio for more info. #nyc #restaurant #closing #upperwestside #rentistoodamnhigh #nycfood #nycrestaurants #foodnews

A post shared by iLovetheUpperWestSide.com (@ilovetheupperwestside) on Nov 27, 2018 at 10:47am PST

But given Freshly Bagel’s short lifespan, I don’t foresee such a public mourning.

Apparently Freshly Bagel had really good pizza, but I only got bagels from them. They were fine.

Upper West Side lunch spots have struggled quite a bit over the last year or so. Not too long before Gigi shut down, Tasty Cafe closed their location on 71st and Broadway (which will “soon” be replaced by Cafe Metro).

West Side Cafe also closed in early April of this year.

Haru Sushi (RA Sushi) Has Left the Upper West Side

Best Mac and Cheese on the Upper West Side