Home
Community
Giant Dogs of the Upper West Side

Walking around the UWS, I stop in my tracks when I see not just a large, but an extra large dog. So many questions go through my mind! How does the owner manage in such a busy city? How much fun is it to live with a giant? But most of all, can I pet the glorious creature? I have had the pleasure of finding out more information about some of these giant dogs of the Upper West Side.

First up, weighing a whopping 135 pounds is a Great Dane named Bea Arthur. His owner Cateryn calls him Artie for short, but there is nothing short about this giant; he stands 36 inches tall! 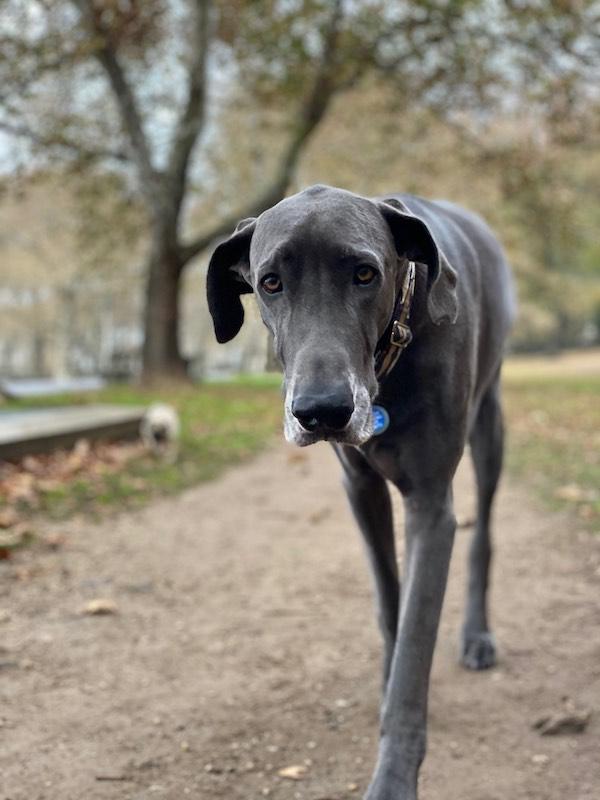 Artie stops traffic in the neighborhood. “It’s hard to walk more than a block without someone commenting on Artie and saying hello. On several occasions, people have hollered out the windows of passing cars,” said Cateryn.

While all of NYC is very aware of this gorgeous giant in its midst, Artie seems to be blissfully unaware of his size.

“He has absolutely no idea how big he is. Neither do his Great Dane friends. We meet up every Sunday for off-leash hours in Central Park, and they’ve photobombed many wedding photos! My favorite was when Artie and his buddies decided to join a bride and groom around Bethesda Fountain. Artie put his tush right between the happy couple. They were amazingly good sports about it, and I wish I could see the professional photos.” 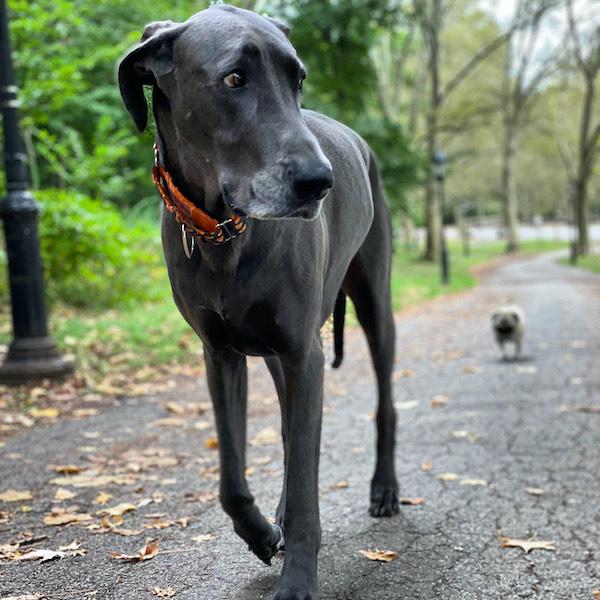 Cateryn said that having a giant dog in the city is a wonderful way to meet new friends. She loves how friendly the UWS is to all dogs, but especially her Artie. That said, some challenges come with having a big dog as a pet.

Liana and Craig, Maia’s owners, are both born and raised New Yorkers. They decided to add a Bernese Mountain dog to their family, and at only 19 months old, Maia now weighs 115 pounds. Liana and Craig have another dog, Beowulf, who weighs 48 pounds. After getting Maia, they actually moved into a larger apartment to accommodate the new addition!

“We call her Big Woman, Titanic Lady, Maia Papaya, and Nugget. Nugget was from when she was a tiny puppy, but it stuck even though she’s more of a whole chicken now,” said Liana. 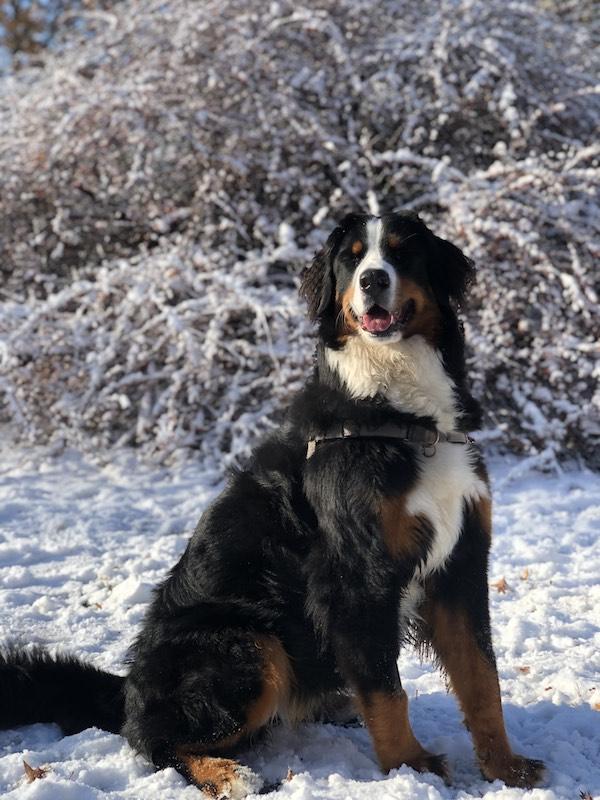 Like Artie, Maia seems unaware of her size. “I recently took her to the vet. I was sitting on the bench waiting, and when the nurse came, Maia was afraid to go with her, so she tried to ‘hide’ under my legs rather unsuccessfully. She is so tall that my feet were high up in the air, and I was tilted back against the wall. She doesn’t seem to realize how big she is and is still a baby at heart,” Liana said.

Having two large dogs in the city, I figured Liana is the perfect person to ask about what to expect if you want to bring home a large dog to your NYC apartment. 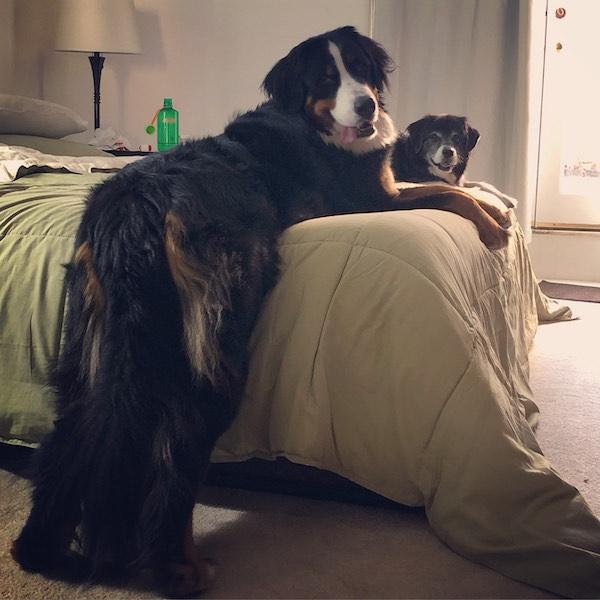 “People often ask me how I could have a large dog in the city; they believe it is ‘cruel to keep them cooped up in apartments.’ They are looking at it in the wrong way! NYC is dog heaven. NYC pups get so much stimulation and interaction with people and other dogs. In my opinion, as social animals, they live far more fulfilling lives in a city environment than they do being cooped up in suburban backyards.”

Samurai, or Sammy for short, has lived a long and fulfilling life right here on the UWS. Weighing about 72 pounds, this pure bread Akita stopped me in my tracks on the street. Sammy is pure white and looks like a polar bear! According to his owner, Terry, my instant attraction to Sammy is not unique. “People always comment about how handsome Sammy is. Sometimes they don’t comment, but you can see the smile on their face as we pass by, and some purse their lips and blow him a kiss,” said Terry. 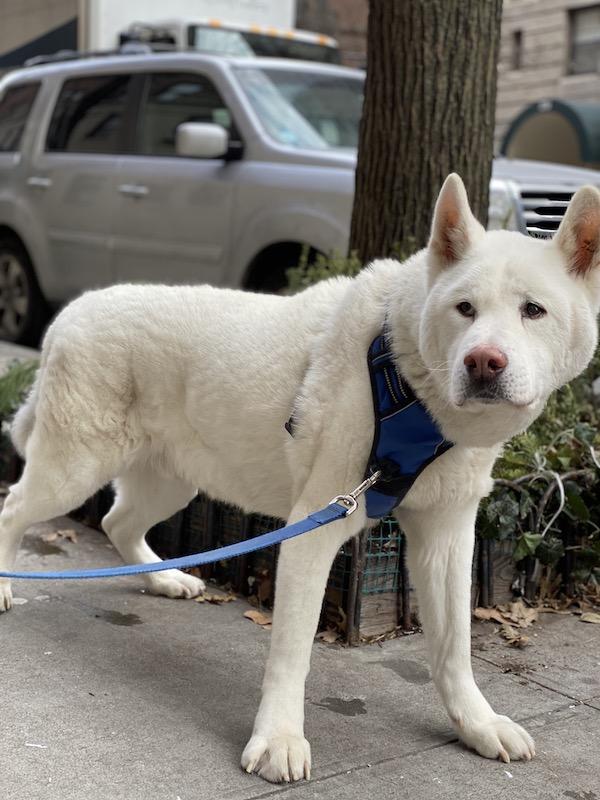 Terry told me that while people are fascinated by the way Sammy looks, they can be a little bit leery of his size, especially if they are walking with a smaller dog. “Sammy is a ‘marshmallow’ personality both with other dogs and with people,” said Terry.

Sammy is a social giant and can be found hanging out at Mille-feuille with his owner. Terry said they also frequent “Riverside Park, Joseph’s Pharmacy where one of the staff has a big crush on him, and sometimes Housing Works on Columbus, where most of the staff fall all over him.” If it sounds like Sammy is on the go, that’s because he is. Terry advised that all people considering getting a large dog to be prepared for 3 or 4 long walks a day, “not just 15 minutes each.” 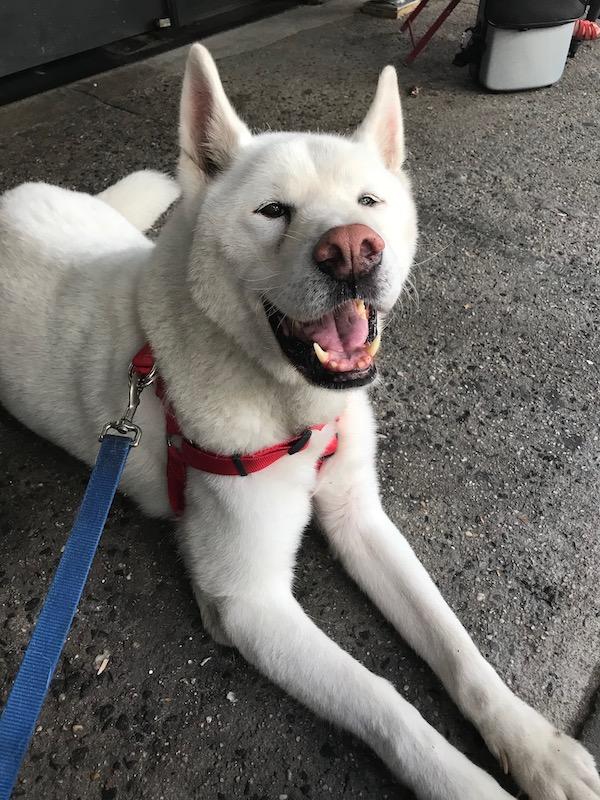 Finally, we have our UWS giant Belle. She is a more rare breed, a Greater Swiss Mountain Dog or Swissy, and currently weights 105 pounds. She is still young and will grow larger!

“The Greater Swiss Mountain Dog isn’t a common breed so most people are confused about what kind of dog she is. Most of the time we are asked if she is a Bernese or some sort of mix, or comment that we must have had a haircut for our Bernese. When Belle was younger a lot of people thought she was a beagle mix. I was tempted to tell them she was part beagle and part Clydesdale horse.”

“Most of the time, people just walk past, smile at her and comment about how beautiful she is. I can’t disagree with those comments!” said Belle’s owner Michelle. 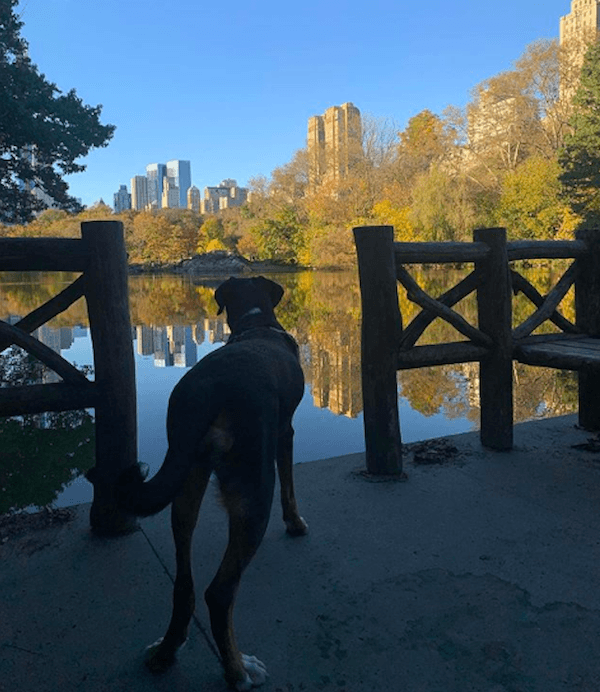 Much like the other giants of the UWS, you can frequently find Belle running around in Central Park. Michelle also told me how important it is to make sure her big dog gets enough exercise during the day. Do you know what else Belle has in common with her other giant friends? That’s right, she also doesn’t realize how big she is! “Belle doesn’t know that she is a big dog and is afraid of these small ‘vocal’ dogs who are sometimes the size of her head,” said Michelle.

Another common theme I heard from speaking with these large dog owners is that transportation can be an issue. “Getting around to different parts of the city can be a challenge. It would be great if we could bring her on the subway, but she just wouldn’t fit in a bag. Also, some cab drivers are more accommodating than others. We now have to flag down vans as she won’t fit in a regular taxi with us!” Michelle explained.

You might hear someone calling Belle “Big Guy” on the street, even though she wears a pink collar! She is also affectionately known as Belly-Bear, Belly-Boo or just Boo. After her recent challenges crawling under a coffee table, she is also referred to as Chunky-Butt by her family. 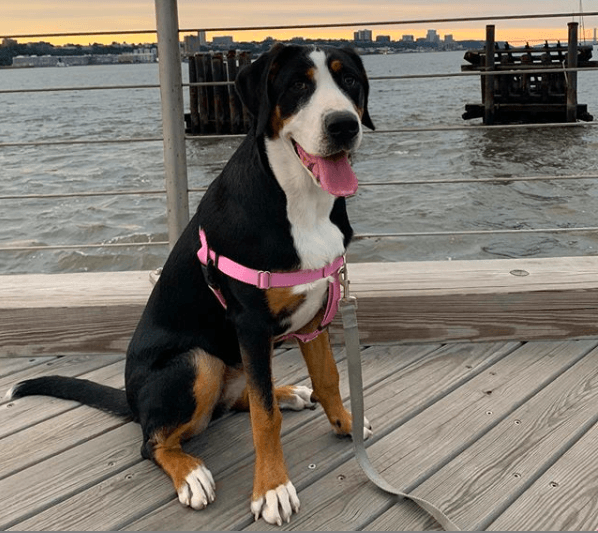 So where can you find this majestic giant?

“We take Belle everywhere that will let her in. If she has been to a place once before, it is her favorite, and she always wants to go back when we walk past it. One of her favorite places is Pet Central on 76th; we can’t walk down 76th Street from Riverside Drive to Amsterdam without Belle trying to take a detour to the pet store for free treats. It is such a great place and they are so kind to the dogs. Central Park for off -leash hours, Riverside Park and walking along the Hudson River, Arthouse Hotel lobby bar (very, very dog- friendly!), and Lululemon, specifically, the water bowl near the back of the store. For some reason, their water is better than what she gets at home. And randomly, she loves going to the CVS on 77th. She always tries to go in when we walk past.”

Overall, it seems like the UWS is a pretty good place to be if you’re a giant dog!

Where To Play Chess On The Upper West Side

Sun Worship on the Upper West Side