New York City dogs love Central Park, as do their owners. It’s truly a dog paradise for the dwellers of this concrete jungle, with 23 dog-friendly areas as well as countless paths to walk with your furry friend.

A community of pups and their parents inevitably forms; one cannot help but recognize the face of other pet parents and, of course, their irresistibly cute canine companions. Hepi, also known as Baxter and Cybele’s mom, became friendly with a Japanese woman named Hiroko who would take her Maltese dogs for walks in a stroller. Hiroko carried freeze-dried salmon with her, and she would treat all the dogs who greeted her to this great snack.

Hepi and Hiroko got to know each other under interesting circumstances: a few years ago, Facebook posts appeared accusing Hiroko of dognapping and Hepi came to her defense. She learned that Hiroko was working two jobs at the time and was using her modest salary to care for her 3 Maltese dogs while also providing delicious treats to every dog she met in the park.

A few days ago, Hepi learned some terrible news: Hiroko had fallen ill, is starving and is losing a lot of weight. She contacted Hiroko and found out that she lives in a windowless basement apartment in Astoria. There was a fire in the building, and as a result, Hiroko’s apartment flooded with water, causing her to become very sick and unable to work. With no government help available to her, and no savings whatsoever, Hiroko has hit hard times indeed, and Hepi is once again coming to her aide. 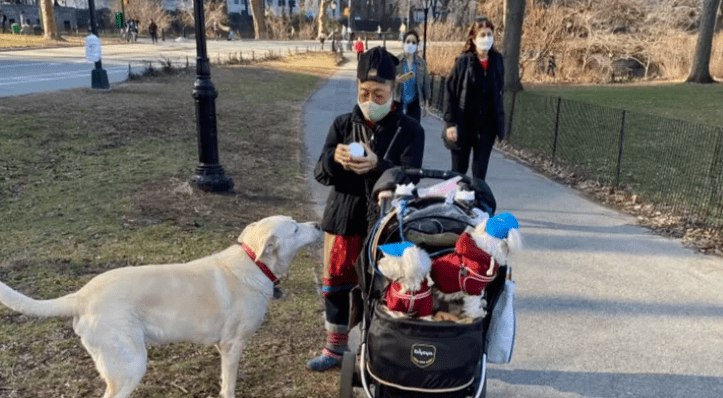 Hepi has started a GoFundMe campaign to help support Hiroko, and has set a goal of raising $25,000 to help her with rent, groceries and other basic survival needs. As of writing, $6,705 has been raised through 56 donors as community support continues to pour in.

A Hole in the Sky