During a 2011 videotaped interview, singer, actor and civil rights activist Harry Belafonte spoke on the importance of living in accordance with considered ideals. “Get them to sing your song,” he said, quoting his mentor, singer, and political activist Paul Robeson.

Turning 94 on March 1st, 2021, the long-time Upper West Sider who achieved fame as the “King of Calypso” has consistently “sung his song” in many ways. He has been recognized and honored around the world for defying the status quo by participating in civil rights marches and protests, advocating for justice in Africa, and founding Sankofa, an organization engaging artists in action to advance social equity and peace.

The manner in which he became a co-op owner at 300 West End Avenue, over half a century ago, is one among many Belafonte actions that inspired admiration for his personal commitment to equal treatment.

In 1958, he was already an international star. In his 2012 memoir, “My Song,” written with Michael Schnayerson, Belafonte described the difficulties of finding a place to live that suited his family’s needs. Horrified to hear about the prejudice Belafonte was fighting in his apartment search, Eleanor Roosevelt wrote in her syndicated My Day column, “I am sure that every New Yorker was shocked the other day to read that Harry Belafonte and his charming wife and baby were finding it practically impossible to get an apartment in New York City except in what might be considered segregated areas or in a hotel. I have long been saying that in the North we have only one step to take to meet the Supreme Court order of non-segregation in schools, and that is non-segregation in housing. In New York State we have the laws necessary to achieve non-segregated housing if we saw that they were diligently respected.”

Belafonte settled upon an apartment at 300 West End Avenue and leased it for a year. Acutely aware of the common prejudice against renting to people of color, he made the deal through another person. After the family moved in, landlord Ramfis Trujillo, playboy son of Rafael Trujillo, Dominican Republic president and dictator until his assassination in 1961, learned that Belafonte was not white, and asked him to leave.

Belafonte wrote in his memoir that he was furious at the landlord’s rejection. He famously responded by purchasing the building with partners through a separate corporate entity. He then encouraged friends to purchase apartments in what Belafonte and a number of other tenants turned into a co-op. Herman and Lenore Rottenberg were among those who worked with Belafonte to make all this happen.

Belafonte lived in a 21-room apartment in the building for almost 50 years. Art on his walls included work by Diego Rivera, Marc Chagall and others. And, a hallway was lined with photographs of Martin Luther King Jr (who we recently discovered gave speeches at The Riverside Church!).

One of the Rottenberg sons, Dan, a  journalist, historian, and founding editor of the arts and culture website Broad Street Review, recalled that the home served as a base for many meetings of civil rights activists and visitors including Mrs. Roosevelt, Martin Luther King Jr., Reverend Ralph Abernathy and his wife Juanita, and John F. Kennedy. 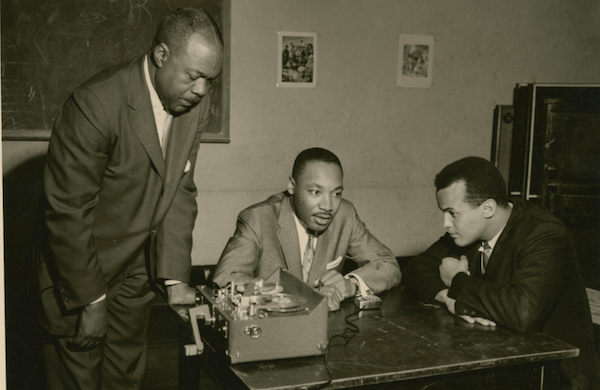 The Rottenbergs were not famous, but, like Belafonte, they believed in working to make the world a better place.  Dan Rottenberg said “My Dad, Herman Rottenberg, sold his ladies’ knitwear manufacturing company in 1962 at age 46 to embark on a second career spreading international goodwill through folk dancing. He operated the Allnations Dance Company for 35 years and also served as director of special cultural programs at International House for 45 years. (He died in 2013 at age 97.) Mom was championing the cause of urban mass transit for the Women’s City Club and providing English conversation to newly arrived immigrants at Manhattan’s International Center.”

The Rottenbergs moved in the late 1960s to the Majestic on Central Park West. They often welcomed foreign graduate students from International House to their home so they would get a good impression of New York and New Yorkers. Belafonte also moved, just a few blocks away from 300 West End Avenue, to a spectacular apartment, where he still lives, above the Apple Savings Bank. He continues to “get them to sing his song,” using his reputation to raise funds and gain attention and support for causes that are important him.

Track Down Your Landlords & Hold Them Accountable!