Home
Community
Help Upper West Sider Figure Out Why Her Car Got Moved. She’s Thought of Everything!

Isabel Ezrati parked her car one frigid night on Riverside Drive and 76th Street, grabbed her belongings and her dog, a Pekingese mix named Happy, and headed a couple of blocks east to her home. She checked the parking signs for regulations and looked for postings announcing a movie filming. Everything looked good. Then, as has become her habit, Ezrati texted a friend and her mother with the location of her parking spot just in case she forgot.

Cut to five days later. While walking down Riverside Drive from 92nd Street, what does she see? Her car … ten blocks north of where she parked it.

“All week long I was thinking I should check on the car,” said Ezrati, an Upper West Sider since 2012. “But I didn’t.”

It wasn’t even as if she went looking for her car and couldn’t find it. She didn’t walk the streets trying to use her fob to set off the car’s alarm.  She just happened upon it. Her car … you can’t miss it. 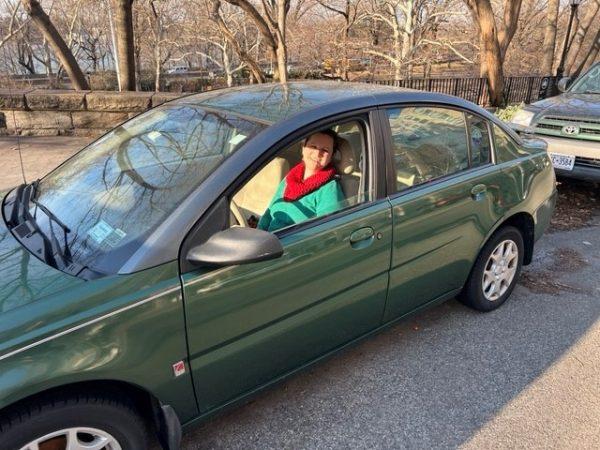 “I have a 2003 Saturn Ion,” she said. “It’s very distinct. It’s between grass green and forest green with a custom gold pinstripe.”

She looked inside and sure enough, there was her water bottle and travel mug.

Welcome to the mystery of the moving car.

She’s positive she didn’t park at 86th Street for several reasons. First, it was such a cold night and she would have remembered the longer walk. Also, Happy might not have made it. Her car was found in front of a fire hydrant (hello, $230 worth of tickets), in a position where you couldn’t open the door without hitting the hydrant.

“I’d never park that close to a hydrant,” she said. “And, if I walked from there, my fingers would have froze.”

Plus she called her mother to check that she did, in fact, send her a text saying she had parked on 76th Street.

Her mother totally understood, and explained that the same thing happened to her and her husband in the ‘70s. Must run in the family.

“She said my father called the police and asked ‘Was my car stolen or did you steal it?’” Ezrati told us. “They said, ‘We stole it.’”

Like many New Yorkers, her first instinct wasn’t to call the police. She decided instead to post her tale on the neighborhood message board, NextDoor. She has long found it a resource for information in cases like these and is a frequent contributor, both answering and asking questions.

“Lo and behold, it works,” said Ezrati, who is a personal trainer, a private tutor and a gifted artisan who works in ceramics. Her work can be seen on Instagram @Izyceramics.

She got nearly two dozen replies, including one she found very helpful from someone who said she’s lived through the sequel of Dude, Where’s My Car herself. This neighbor wrote that the police had moved her car and that when everything was straightened out, the tickets were forgiven.

However, that wasn’t the case here. Ezrati called the 20th Precinct, the Department of Transportation and the Bronx Tow Pound, and none said they had moved her Saturn.

Her car wasn’t tampered with; it didn’t appear to be hotwired. She said the person who moved it didn’t use the parking brake, so maybe her car was pushed to its new temporary home.

We may never know.

“The most hilarious thing is I didn’t panic,” Ezrati said. “At first I thought I had made a mistake.”

COVID Has Been Ruff For Dogs … So Take Them To This Upcoming Puppy Party!