Home
Community
Hidden Spots of the Upper West Side

The Upper West Side has plenty of familiar icons and institutions such as Lincoln Center, Columbus Circle, and the American Museum of Natural History. The neighborhood is widely known for its charming brownstones and beautiful streets, cosmopolitan ambiance, and notable residents. However, many West Siders go about their day to day without noticing some of their neighborhood’s most treasured spots. From rooftop gardens to quaint pocket parks, here’s our guide to the neighborhood’s hidden gems. It’s time to go out and explore!

In a neighborhood with many secret spots, Pomander Walk takes the hidden jewel crown. Inspired by a popular play in the 1920’s set in London, this charming street borrows many of its architectural features from England. It was originally referred to as a colony and the Tudor-like design served a stark contrast against New York City’s futuristic backdrop. The fairytale-like block comes with 27 buildings and 61 units but rare is the instance when one of them surfaces on the market. Travel back in time and visit this NYC landmark found on 95th and West End Ave.

The Lotus Garden, located on 97th St, is a private community garden open to the public on Sundays from 1 to 4pm. The 7,000 sq. ft. green space is placed right above a garage and was in fact one of the very first roof gardens to make its debut in the city. The garden comes with nearly 30 volunteers who attend to the needs of the plants and ensure that the lush vegetation keeps beaming with life. This oasis of peace and tranquility also includes a fish pond and some cafe tables. Encounter a moment of silence amongst the chaos of the city and take your loved one along for a memorable Sunday stroll. 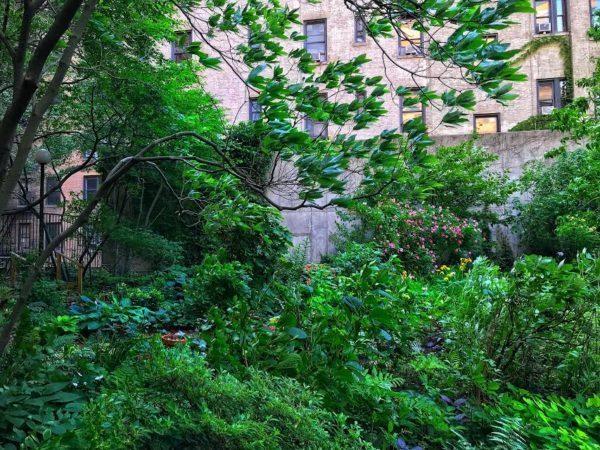 Septuagesimo Uno Park, seventy-one in Latin, derives its unique name from its location on West 71st St. It’s easy to overlook this lovely park and many longtime residents of the Upper West Side don’t know of its existence. That’s in part because Septuagesimo, at two-fifths of an acre in size, is the smallest park in New York City. This tiny park is discreetly tucked away between two classic brownstones. The park’s origin dates all the way back to the 1960’s when the initiative of pocket parks started to take form. Septuagesimo Uno offers the perfect spot to escape from the nearby Broadway crowds and enjoy a quiet retreat by sitting on one of the benches firmly parked alongside some beautiful nature walls.

Atop the second story of the Museum of Natural History lies one of the city’s best kept secrets. Arthur Ross Terrace is a kid friendly spacious rooftop patio where children and parents can find a respite from the hectic pace of urban life traversing through the streets below. This urban sanctuary is beautifully designed and counts with jumping jet fountains that launch wanter continuously into the air. There are some tables with umbrellas that invite for a picnic date or simply to enjoy the adjacent view of the Planetarium under the shade. Arthur Ross Terrace is free to access and one doesn’t have to purchase a ticket at the museum in order to enjoy what it offers.