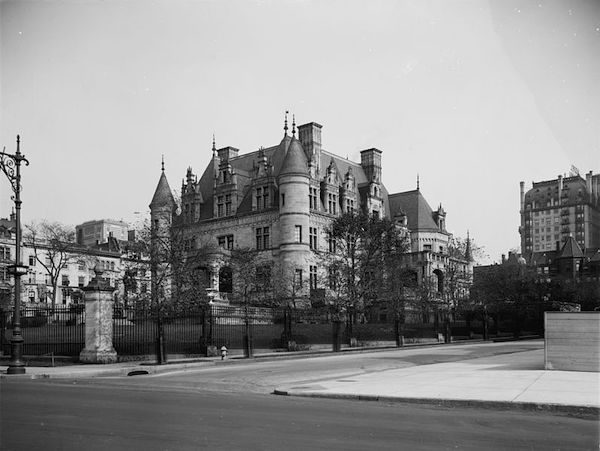 The Charles Schwab House, also known as Riverside, was a 75 room mansion located on Riverside Drive between 73rd and 74th streets. It was built between 1902 and 1906 for steel tycoon Charles Schwab, and at the time was the largest home ever built in Manhattan.

Built by architect Maurice Hébert, who called himself a “Specialist for Reproduction of Historical Exteriors and Classical Interiors”, the House boasted a pink granite facade designed from the chateaus of Chenonceau, Azay-le-Rideau at the front and Blois in the back.

The Schwab mansion was the largest of three massive mansions built by steel magnates in Manhattan, the other two being the current Frick Collection (Fifth Avenue and 70th) and the current Cooper-Hewitt Museum (Fifth and 91st), built by Henry Clay Frick and Andrew Carnegie, respectively. However, the Charles Schwab Mansion did not enjoy the same longevity and permanent place in NYC architecture as its siblings.

This is largely because unlike the now-Frick Collection and Cooper Hewitt Museum, the Schwab mansion was built on the Upper West Side, which for a stretch was considered a low-value area for the kind of person who would live in such a mansion. Also, Charles Schwab lost essentially all of his fortune in the market crash of 1929, bankrupting him and leaving little money for maintenance of the massive structure. Before he died in 1939, he tried to sell his home to the mayors of New York City. However, Fiorello La Guardia, then mayor, was a reformist, and rebuked the idea of living in such a monolith, retorting “Me? In that?”

This last hope for the continued use and maintenance of the Schwab House was gone.

And since the area was one of low value at the time, the house was empty by 1947. In 1948 it was replaced by a plain red brick apartment complex called “Schwab House.”

The greatest downfall of the Schwab House, and what set it apart from its two brothers, was that while the Frick home was designed from the beginning to be an art museum, and the Carnegie home was donated to Columbia University, Charles Schwab intended his full-block home, with ample yard space, to be a home until his death, an objective that became anachronistic with the direction Manhattan was moving as a whole.