The white painted brick building at 161 West 93rd was across the street and half way toward Columbus Avenue from the apartment building where I lived with my parents from about 1955 to 1967. 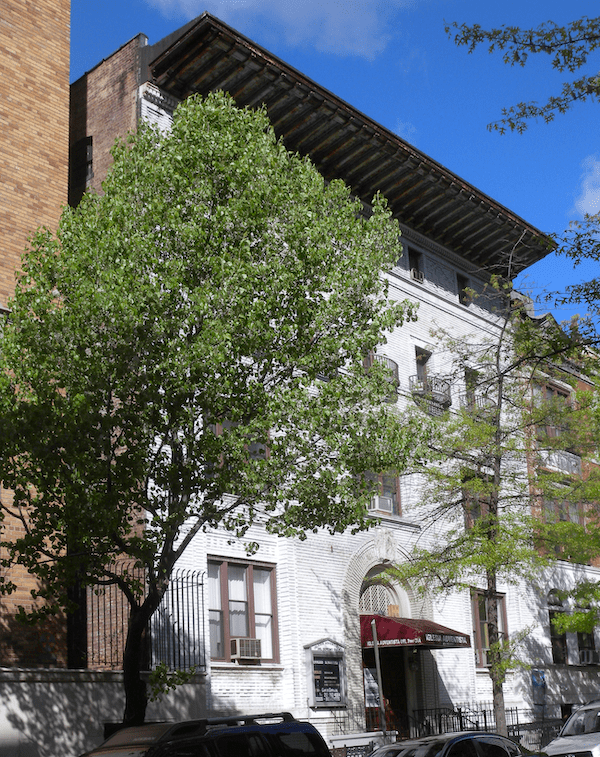 As I remember, 161 had a large (likely metal) elks head attached to a crest above the front door. I know now that the motto of the national Elks was and is “The faults of our members we write upon the sand, their virtues on the tablets of love and memory Charity, Justice, Brotherly Love & Fidelity.” Until 1973, it was an all White men’s club.

Ironically, the previous and original owner of the building was the Nippon Club. Founded in 1905 by well known research chemist Jokichi Takamine (1854- 1922), the men’s club for Japanese Americans and Japanese nationals was originally located at 334 Riverside Drive, between 105th and 106th Streets. 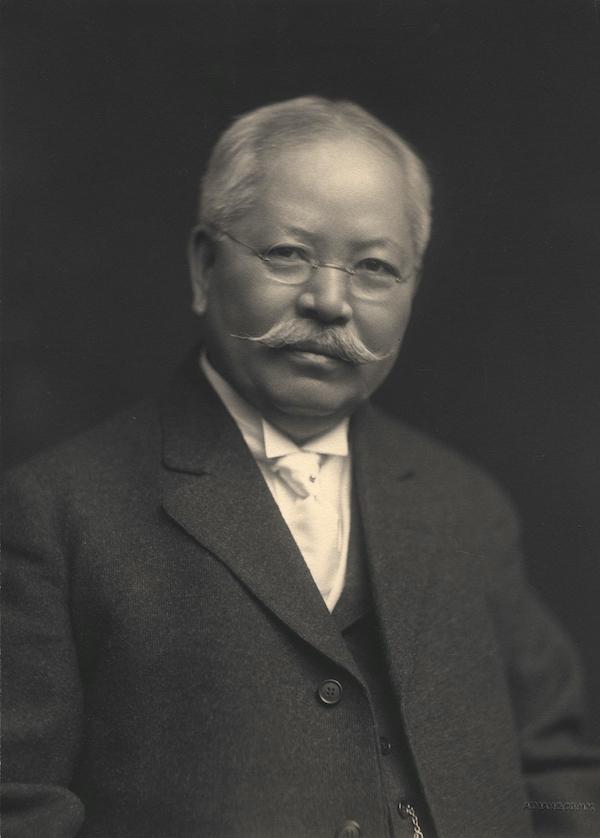 The Club’s building on 93rd Street was built 1912. Its elegant interior, by then long gone, was described in a 2001 NY Times article: “carved sycamore chairs upholstered in gold with delicate patterns were brought from Japan, along with deep gold screens, deeply carved marble topped tables and lanterns of Sycamore slats and rice paper.” However, despite having distinguished guests and a history of hosting well known VIPs, in 1944, after the Japanese attack on Pearl Harbor, the building was seized by the federal government. Twelve of its Japanese members were escorted by the police to their home and the club was closed.

The Alien Property Custodian sold the building to the Elks. Eventually, it came into its present use as the Templo Adventista on the first floor with condominiums above. After the war, the Nippon club re-established itself at another location and is now housed on West 57th Street.

Across the street and next door to my apartment house was Joan of Arc Junior High School. Weekdays, dozens of adolescents loudly jostled each other to get into the school in the morning and came pouring out at the end of the school day. 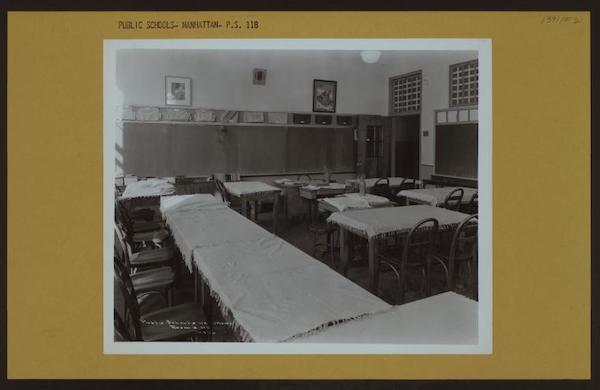 At some point a home-made explosive was thrown in our kitchen window. No one was hurt. Teenagers?

The whole street had a lot going on. 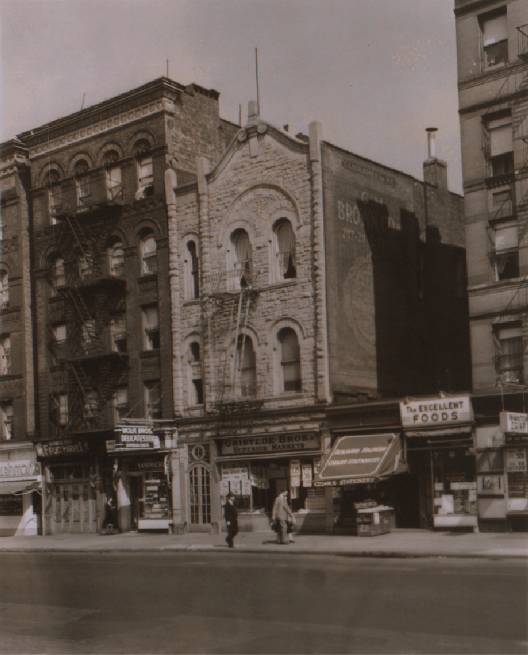 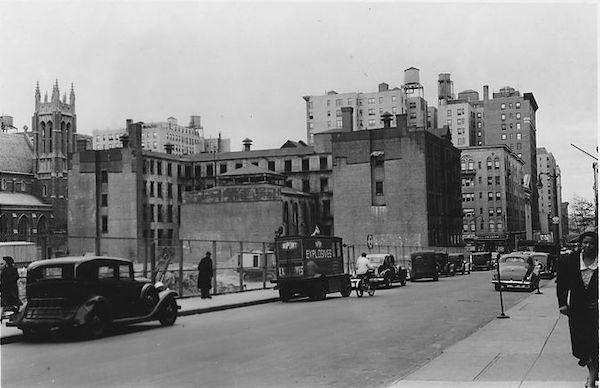 Of course, daily living is marked by experiences that are both special and those that are mundane. Amazingly, ballerina Maria Tallchief came to dance solo at the Joan of Arc JHS auditorium, a community performance by a stellar dancer. Later, I learned she had been discriminated against and not accepted by numerous ballet companies because of her Native American ancestry. Always, even after having achieved fame, she advocated against discrimination. 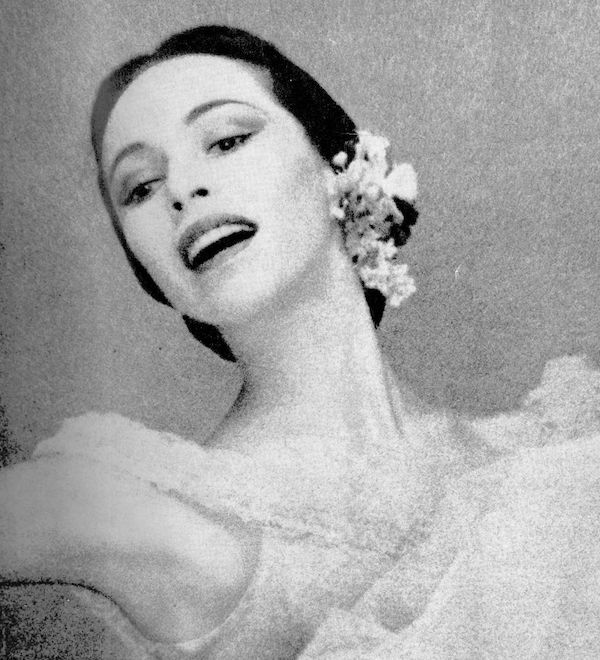 The terrain of West 93rd Street included a candy store that was my source of love-themed comic books. At a small Gristede’s, my father bought a single ripe peach for us to share. In those days, fruit sold out of season was uncommon, and cost a lot.  This perfect fruit, I was told, “came from Africa.”

Like most neighborhood drugstores, the one on the corner of 93rd and Amsterdam had framed prints on medical subjects displayed in the storefront window. These realistic scenes were distributed by a pharmaceutical company to decorate pharmacies. Surgeries of many kinds, inoculations and scientific breakthrough moments were all rendered in great detail, blood and all. Riveting. They depicted only male clinicians and male scientists from many cultures.

Between the end of WWII and the mid-1960s, more than a million Puerto Ricans had moved to New York. Those who came to live on the Upper West Side lived in very crowded brownstone rooms. When the weather was fine, families sat out on stoops. The music from transistor radios and from cars with windows left open was loud and in Spanish. That’s why hearing Latin music today immediately transports me to my native land – West 93rd Street.

I had a friend who lived off the corner of Broadway and 93rd. On weekdays, we would meet up and head for the IRT subway to go uptown. At the start of the 1964 school year, she told me her family was terribly shaken by the murder of Andrew Goodman, her brother’s close friend.

A few months earlier, Goodman, James Chaney and  Michael Schwerner, civil rights activists who went to enroll Black voters in the South, were murdered by the Ku Klux Klan. Goodman, a Walden school graduate, had lived with his family at 161 West 86th Street. In 2014, 50 years after their deaths, President Barak Obama posthumously named the three men recipients of the Presidential Medal of Freedom — honoring them for their effort to bring justice and equality to Americans in Mississippi during Freedom Summer. 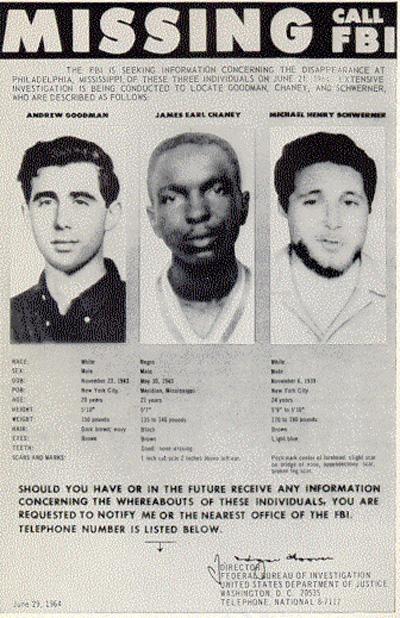 Some time during 1967, my parents had decided to move down to the 70s and West End Ave because “the neighborhood had become too dangerous.” Coincidentally, not long after, I worked a college internship job as an assistant to the art teacher at Columbia Grammar School on 93rd near CPW. There was a fire in the school building and during the restoration process, some classes were held in a brownstone next door.

The barely equipped basement-turned art room was functioning with donated materials. Undaunted, the art teacher commandeered a video camera and taught her students to create animations. One segment involved a skier executing a jump, soaring in the air above a steep slope. It was striking to see how that teacher modeled confronting adversity with a spirit, that for me, has always defined resiliency.