There’s so much to do this holiday season! Please enjoy our 2019 holiday guide to the Upper West Side, and make sure to bookmark this page as we’ll be adding updates.

This year’s parade takes place on November 28th, beginning at 9am. Our summary covers the parade route and the floats and balloons you can expect to see!

Performances will begin on November 29th at the David H. Koch Theater, continuing through early January of 2020. The magical production features 90 dancers, 62 musicians, 32 stagehands and 2 casts of fifty young students each from the School of American Ballet.

This family-friendly performance will be coming back for the second year in a row. Shows will begin on December 1st, and will take place throughout the month at Theatre 71 (152 W. 71st Street, 10023, right off Broadway).

The restaurant’s fourth annual tree lighting is open to the public, and will take place on December 3rd from 5-7pm. The evening highlight will be a twenty-foot tree covered in over two thousand ornaments and ten thousand lights, with a design inspired by the history of the UWS restaurant.

Lit up trees, free refreshments and a choir performance will take place at Verdi Square on December 3rd at 5:30pm. 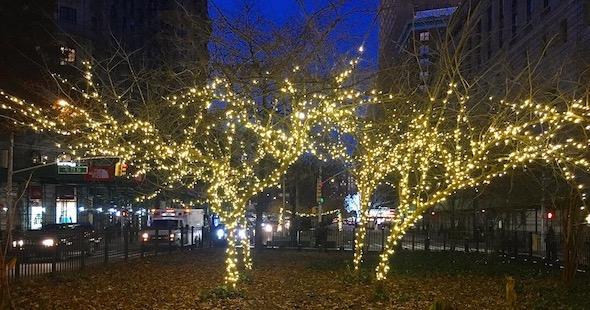 Broadway Under The Stars

The 20th Annual Winter’s Eve at Lincoln Square will be held on Monday, December 2nd from 5:30-9pm.

The market will be running from December 4th to December 24th. Check out which vendors will be there!

This stunning spectacle will be taking place in Central Park on December 5th!

Harry Potter and the Sorcerer’s Stone will be scored by John Williams live at David Geffen Hall. Performances run from December 11th to 14th.

On December 11th at 7pm, audience members will be able to join in on the best songs from the 1954 classic with stars Bing Crosby, Danny Kaye, Rosemary Clooney, and Vera-Ellen!

Paul Winter’s annual concert at The Cathedral of St. John The Divine will run from December 19th through 21st.

This will be the 13th annual Chanukah on Ice NYC, and it will take place at Lasker Rink on December 22nd from 5-8pm. Participants will skate to live Jewish music throughout the night, accompanied by a life-sized dreidel mascot. Attendees will enjoy complimentary hot drinks, hotdogs, soup, latkes and traditional latkes and holiday doughnuts. A giant hand-carved Ice Menorah will be lit in a special Chanukah ceremony halfway through the event.

Charity Vending Machines on the Upper West Side