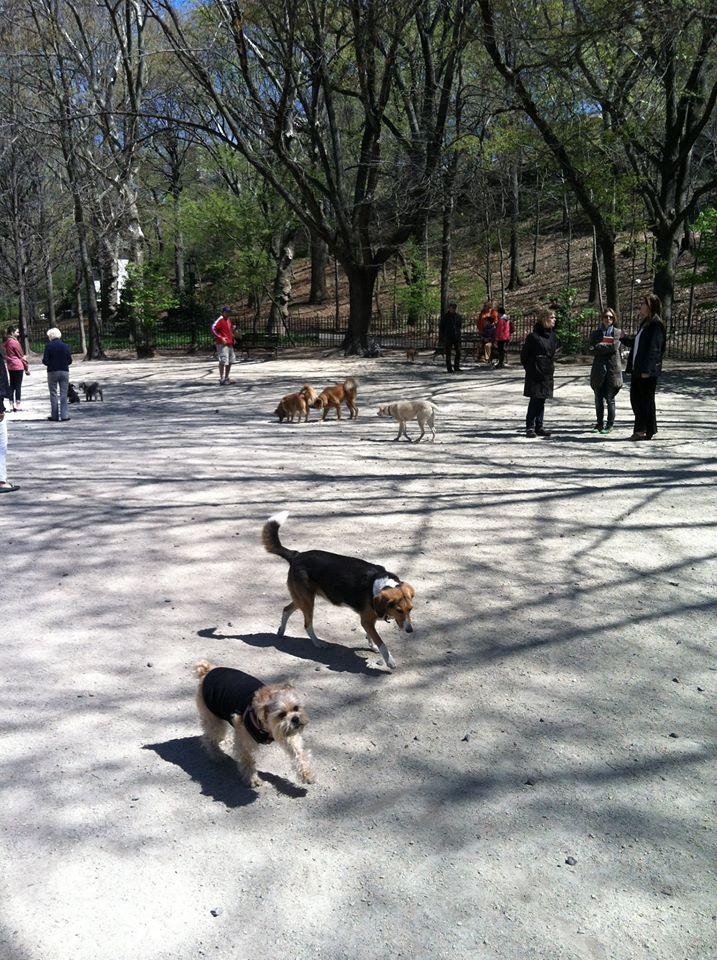 People and their dogs enjoying the 105th Street Dog Run in Riverside Park.

On Saturday, July 30, an elderly woman suffered a severe dog bite — which required 30 stitches — while trying to break up a scuffle between her dog and a husky. We’re told the incident occurred at 8:30 a.m. under a bench at the Riverside Park Dog Run at West 105th Street.

We have an image displaying the extent of her injuries, though discretion is advised as it may be upsetting to some. Please click here if you wish to view.

She’s trying to make sure this doesn’t happen again, but the owner of the other dog has allegedly been hard to find.

“Normally, I don’t go into the dog run,” said Joan Adler, 74, of West 108th Street. “That particular day it was hot, so I went in to cool my dog off with a hose.” Adler, retired with a hip replacement, told us she took a seat to rest as her dog was off-leash in the dog run.

“Around my waist I carry a little pouch with treats in it,” described Adler. “So, I sat down, gave my dog a treat.” At this point, Adler noted that there were two other dogs, both off-leash, that came over to her at the bench she was sitting at. One of them was a husky. Adler remembers giving the husky a treat as her almost 2-year-old Bernedoodle went under the bench to play with a ball she had brought for him. 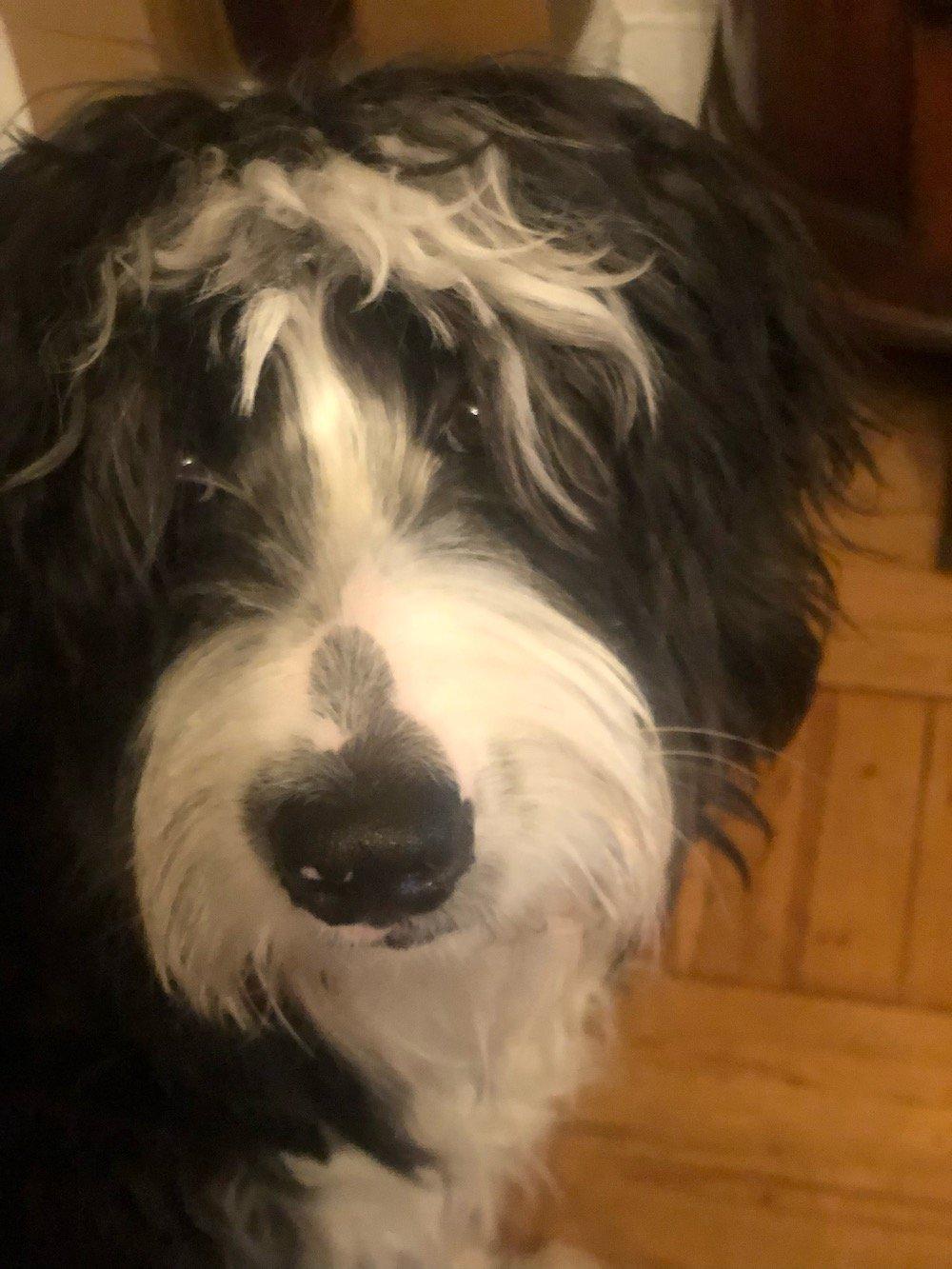 “The next thing I knew, I heard a commotion underneath me and it was this husky attempting to get this ball from my dog,” said Adler with distress, adding that the husky “was really attacking my dog.” Adler went to break up the tangle by pulling on the husky’s harness, but then “the dog turned around and bit me.” She started screaming “Get the dog, get the dog!” in desperation. Her dog did not suffer any injuries, as she was able to pull him away in time.

Adler’s husband, who was with her in the dog park, was the first to point out how “mangled” her arm looked from the bite. In the heat of the moment, she remembers seeing the husky’s owner on the other side of the dog park.

“There was no conversation in terms of him offering help or concern,” said Adler. On her way out of the dog run, Adler recalled approaching the husky owner to find out if his dog had its rabies shots. “Without question, he never offered any interest in my well-being.” 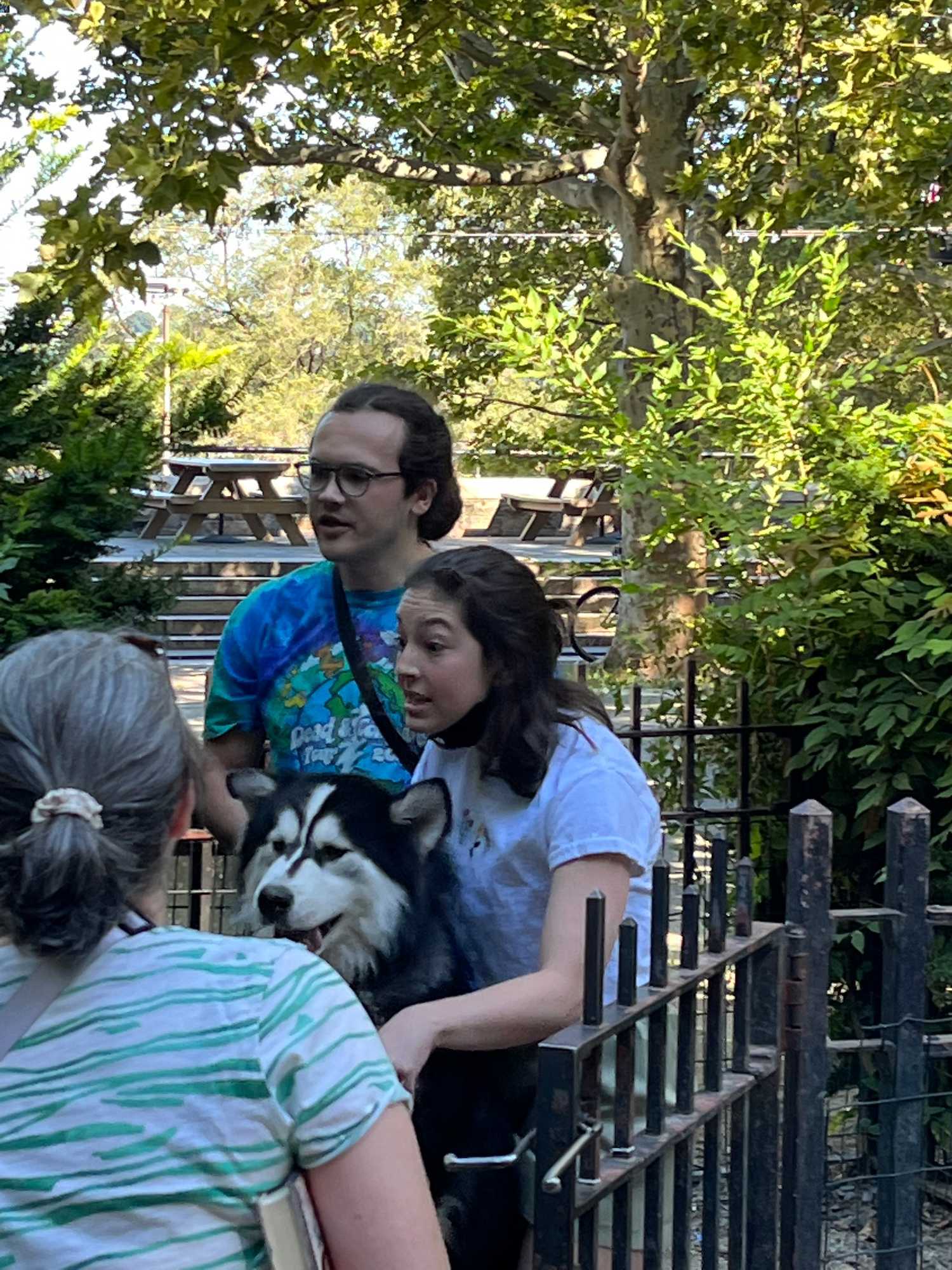 Joan Adler (bottom left) confronting the owner of the husky and his girlfriend.

Adler recalls a heated dialogue with the husky owner as they both exited the park. The owner of the husky, a young-looking male in his 20s or 30s, gave Adler his first name — Isaiah — and his phone number. But he would not disclose his last name.

Adler filed a police report, hoping this kind of attack doesn’t happen to anybody else, especially if the dog has a history of biting people. Adler’s priority is to have the husky “muzzled.”

Days later, one of Adler’s friends, Darcy Dennett, sent her a text message describing the same husky attacking another dog, a Basenji, at the same dog run. “The husky had its jaws around the Basenji’s neck and wouldn’t let go. I was afraid it was going to kill the dog,” wrote Dennett. “The [Basenji’s] owner was bitten trying to separate the dogs. I believe the Basenji was not neutered, which of course is also an issue.” 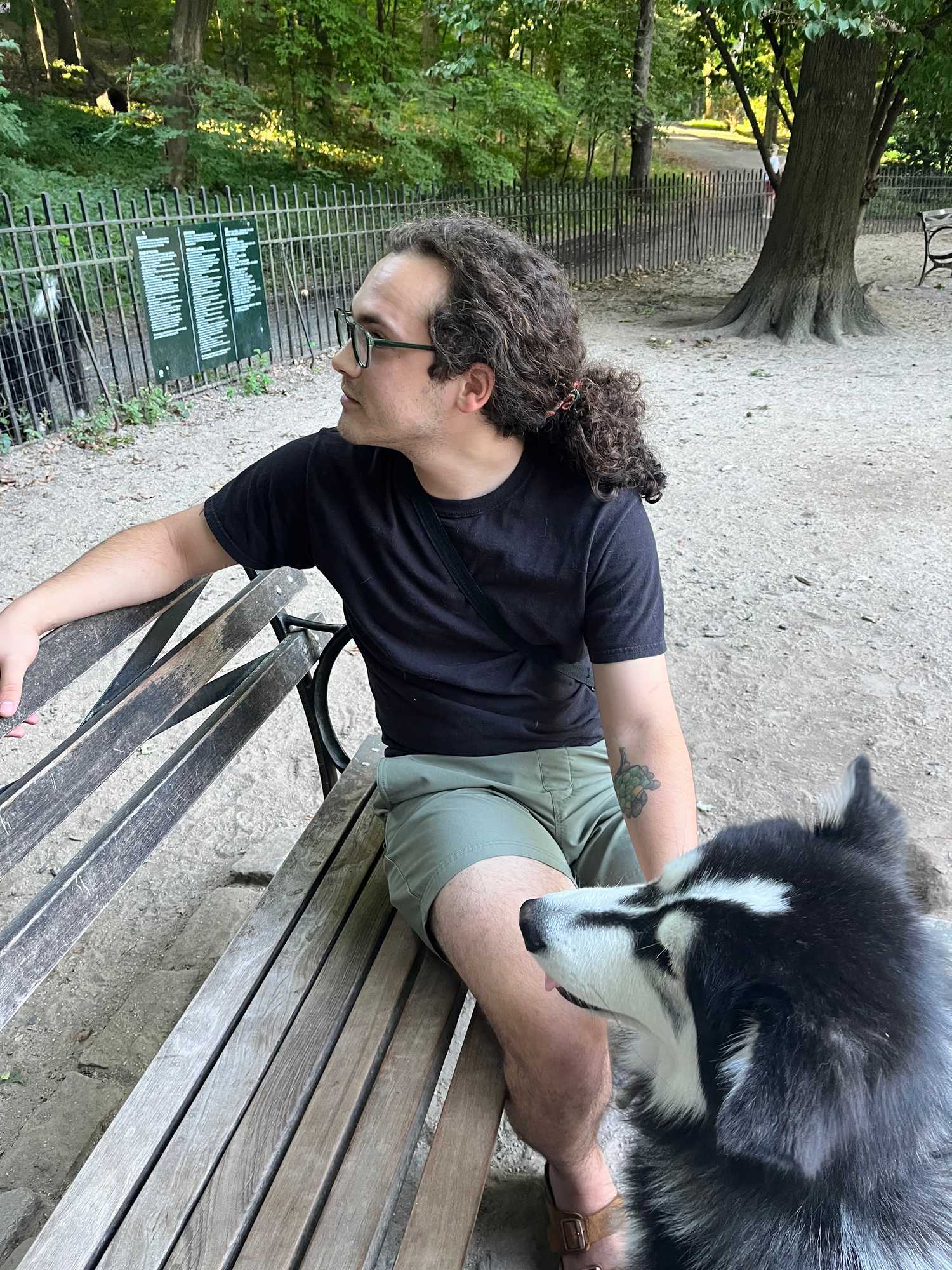 In an attempt to track down the husky’s owner, Adler started a thread on Nextdoor telling her story. Currently, there are more than 280 comments, but nobody has been able to ID him. Here’s the thread — though we should advise the first image may upset some readers: https://nextdoor.com/p/JnsqXM2g5bMx/

Adler shared the husky owner’s phone number with ILTUWS. On Sunday, August 14, somebody picked up the phone and told us, “I think you have the wrong number” when we asked if we were speaking to Isaiah. ILTUWS followed up with a text message explaining that we were investigating the incident and his input would be welcome.

Isaiah responded with this statement:

Hello – happy to provide the following:

It was a very unfortunate accident that happened, and we hope for a speedy recovery. It is always regrettable to see dogs set up for failure, especially when it can be avoided. There was sadly a high cost of this particular failure, but I don’t believe either dog is aggressive by nature. It is tough to socialize a dog with resource guarding issues, especially in high energy environments, when treats and/or toys are around. An overstimulated dog can become unpredictable and, when provoked, can attack, which leads to fights. Unfortunately, in this particular case, my dog decided to fight back and a bad injury resulted.  Dog bites are serious and, as every dog owner knows, are much more likely to occur if sticking a limb between two fighting dogs.
Our dog has a very sweet disposition and is great meeting adults, children, and other dogs on a daily basis. We receive great reports from the dog walker every day about his personality. After the incident, we returned to the park to see if we could catch Joan for a chat, but I was instead met with a large group with many different discussion points being put forth, so I was unable to relay what happened. As a happy resident of the upper west side, we would never seek to upset the community. As such, we have avoided Riverside Park out of respect for Joan’s request that my dog not be brought there. He continues to be a happy boy who loves to meet new dogs, and I have every confidence that an incident like this will never happen again.

Fire on 108th and Broadway

A Hole in the Sky