“When our son Ryder was 12, he asked us, ‘When is my bar mitzvah?’ None of the synagogues we spoke to would take us after second grade,” explains Upper West Side mom Randy Ellen Lutterman.

“A friend recommended we check out Stephen Wise Free Synagogue. It was the fourth or fifth place we tried,” says Lutterman, whose family spent the spring of 2016 “blind-dating synagogues” and “crashing b’nai mitvzah services” in search of a place where they might belong. “After five minutes in the sanctuary, we looked at one another and knew we were in the right place.” At the end of the service, Rabbi Ammi Hirsch addressed the crowd: “If you’re not in a bar or bat mitzvah program… you should give me a call on Monday. If you like what you saw here… give me a call on Monday!”

“Now we know it’s something Rabbi Hirsch says every Saturday,” Lutterman adds, “but at the time it seemed like magic! Ryder turned to me and asked, ‘How does he know we’re here?’” They called Rabbi Hirsch on Monday.

Today, one of the most common things Stephen Wise Free Synagogue’s Rabbi Rena Rifkin has been hearing from parents of fifth, sixth and even seventh graders is that they think it’s too late for their kids to become bar or bat mitzvah. “It’s never too late!” she tells them.

Rabbi Rifkin gets it… life gets busy. Especially during the pandemic, parents have been hesitant to enroll their children into new programs — or maybe, like Lutterman, they’ve been told it’s too late to join. But just because a child didn’t start Hebrew school by third grade, doesn’t mean they can’t become a bar or bat mitzvah by the time they turn 13.

As the director of youth education at Stephen Wise Free Synagogue, Rifkin makes it her mission to prepare each child as they’re called to the Torah. Through their Hebrew Catch Up program, the synagogue’s Religious School is able to welcome all children — including students in grades 4–7 with no Hebrew or religious educational background — and help them make up for lost time.

“Rabbi Hirsch, Cantor Dan, Rabbi Natov and, of course, Rabbi Rifkin made themselves so available to us. They really met us where we were — and supported Ryder the whole way. And when they learned how passionate he was about music, they found new ways to invite him to take ownership of the bar mitzvah experience. It was remarkable,” Lutterman says.

“Starting early is better, of course. The best way to become a Jewish adult is through years of study — and we have a religious school drop-off program for children as young as four,” says Rifkin. “But we never turn away new learners,” she adds. 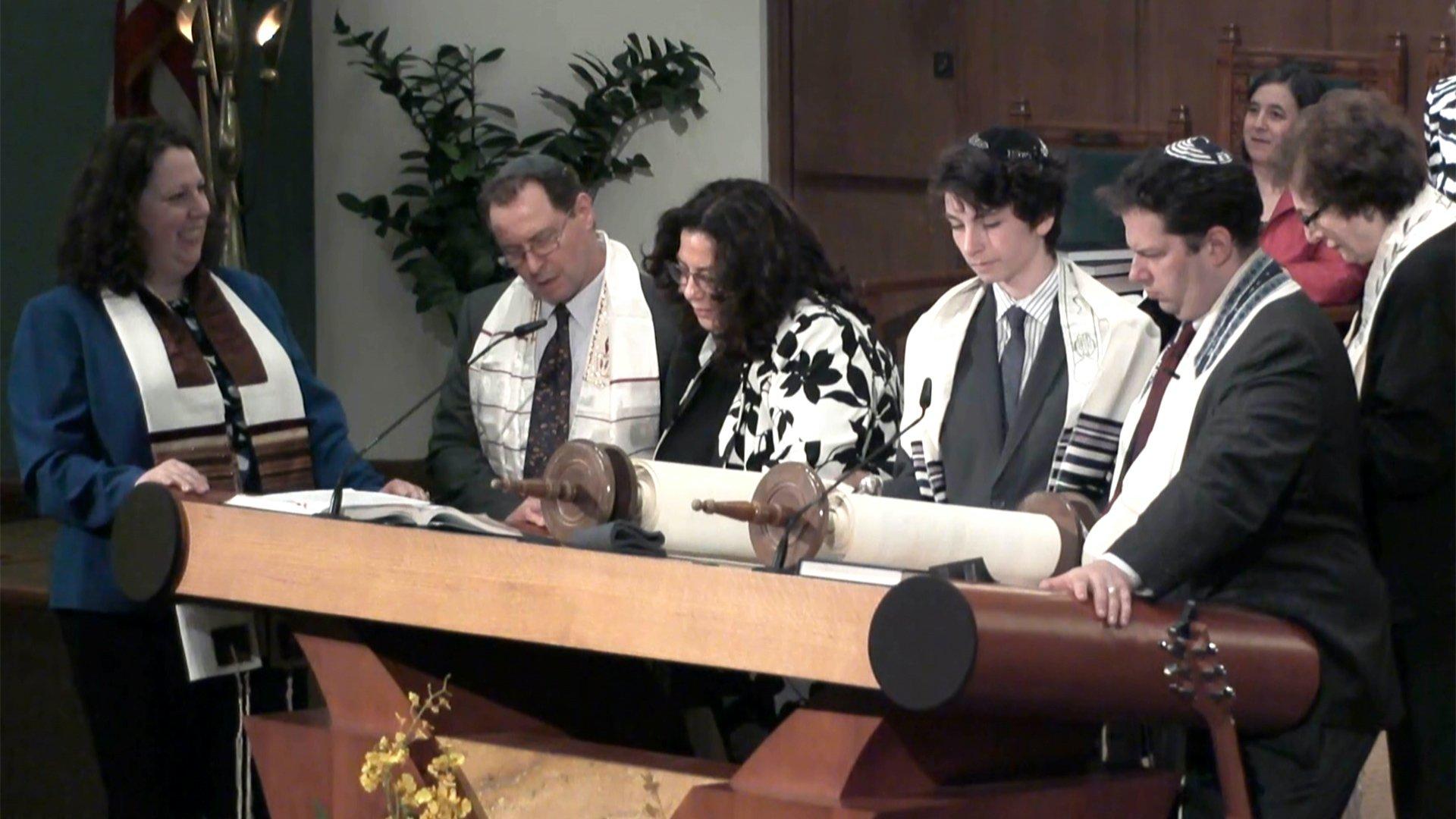 Ryder’s parents joined him on the bimah for an aliyah. Photo credit: Edgar De La Vega.

“It’s impossible to articulate how we felt watching Ryder as he was called to the bimah,” says Lutterman. “My husband and I sat in the front row, surrounded by friends and family who all knew what our journey had been, but had no idea what to expect. Ryder did an amazing job leading the service and we were simply bursting with pride.”

“Legend has it that Rabbi Akiba didn’t begin studying Torah until he was 40 years old and we still consider him a great Torah scholar,” says Rabbi Rifkin. “It’s less about when you start and more about how you commit to your studies!”

The famous first-century rabbi wasn’t the only one who started later in life. Peter and Joan Dichter became b’nai mitzvah this year — after celebrating their 48th wedding anniversary. “They didn’t have b’not mitzvah in those days, at least in my synagogue,” says Joan. Danielle Morris also participated in Stephen Wise Free Synagogue’s Adult B’nai Mitzvah program with the Dichters, celebrating her bat mitzvah two weeks before her 13-year-old son’s. “If my kids were going to go through this, I wanted to know what it was all about,” she explains.

The thing about Jewish learning is that “it’s a lifelong affair,” says Rifkin. “I went to five years of rabbinical school and have a bachelor’s in Jewish studies — and even I don’t know everything!”

And when it comes to Jewish identity, it’s better late than never. “A massive amount of development happens in the teenage years — that’s when you start really discovering who you are,” Rifkin says. “It’s so important that our kids start, and that they keep going.”

WSCAH BLOCK PARTY: Food, Fun, and a Noble Cause

KIPP Beyond: A New Middle School in Morningside Heights