Two pretty interesting events are taking place at Stand Up NY this week! First, a documentary screening of The Rise of Jordan Peterson will take place on Wednesday, November 13th. The controversial film about the controversial psychology professor and best-selling author was scheduled to screen a few weeks ago but was cancelled at the last minute due to protests.

“We were shocked to receive an e-mail at 11pm the night before the encore screening telling us that the film was cancelled,” comments Rise director and Holding Space Films founder Patricia Marcoccia. “They said they put a lot of thought into the decision after staff complained about the content, but I wish they would have included us in their deliberation process or at least given us more notice so we could have made alternate plans.”

Comedian and podcaster James Altucher heard about this cancellation, as well as two venue cancellations in Toronto, and decided to reach out to the filmmakers to invite them to show the documentary at Stand Up NY.

“Jordan Peterson is a dynamic and unique thinker who has inspired me in many ways. His book 12 Rules for Life
has had a huge impact on me, so much so that I find myself rereading it often,” Altucher said. “Stand Up NY is a venue that has long stood as a beacon for a lively exchange of ideas and a place where freedom of speech is
cherished so we welcome the opportunity to screen this documentary,” he added.

Peterson initially sparked controversy in 2016 for his criticisms of Canadian human rights legislation parameters and political correctness on university campuses. He has since released a self-help bestseller, 12 Rules for Life, which has sold more than 3 million copies worldwide. Rise filmmakers said they faced barriers when trying to book mainstream and arthouse cinemas to screen the film, with venues stating reasons such as concerns about controversy, ethical reasons, and lack of market viability due to the nuanced nature of the film.

“It’s hard to stomach someone telling you that there’s no market viability for an unprecedented film about Jordan Peterson when he sells out theatres around the world,” said producer Maziar Ghaderi. “Patricia and I just wrapped a month-long tour of community-based screenings across North America and the reception has been amazing.”

“This film is definitely a conversation starter, which is why we wanted to have a theatrical film release,” adds Marcoccia who has been filming Peterson and his family since 2015, well before he became the international public figure he is today. “While making this film, we held many screenings in our living room with people coming at this from all sorts of perspectives — from Peterson fans, to opposition, to those who hadn’t heard about Peterson at all. And there was something in it for everyone. It resulted in the most fascinating conversations.” 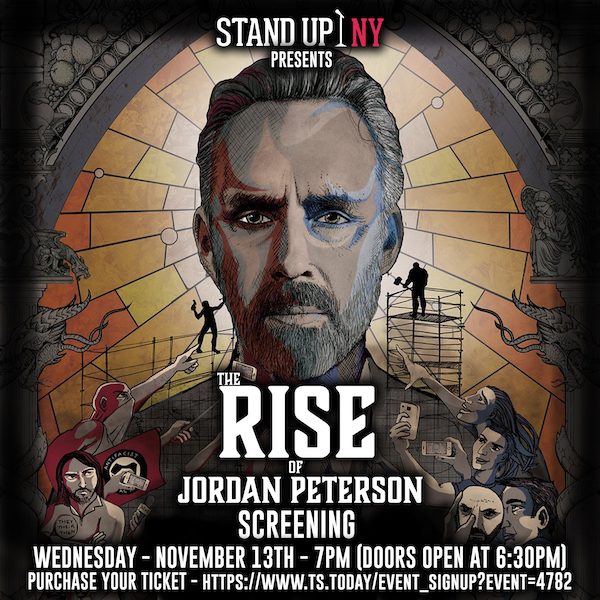 The Toronto premiere of ‘The Rise of Jordan Peterson’ sold-out in under 48hrs on Sept. 26, prompting Cineplex-
Odeon to move the screening to a larger venue.

The screening will be followed by a live Q&A with filmmakers Marcoccia and Ghaderi moderated by Altucher.

To view the screening, get tickets here.

On a much less controversial note, another Canadian will be featured at Stand Up NY this week: Tom Green!

The funny man from my childhood will be one of the comics gracing the stage on Friday, November 15th.

Tom Green became a household name when MTV picked up “The Tom Green Show”, which displayed his street skits and offbeat humor.

Other comics at Friday evening’s performance will include Sherrod Small, Yamaneika and James Altucher.

This show begins at 8pm and you can get tickets here.