One Day University is offering an upgrade to our quarantined lives. Wondering what Abraham Lincoln would do in this crisis? I just finished watching an outstanding live-streamed lecture by Professor Louis Masur of Rutgers University, who provided insight into how Lincoln developed coping mechanisms to become one of the greatest figures of history.

We know that One Day U students are smart, but they aren’t usually this young! We wouldn’t be surprised to see Stan presenting his own One Day U lectures in the future. #lifelonglearning #onedayu #education #inspiration

Well known for their careful selection of the most popular professors lecturing on wide range of topics, people choose One Day University to learn more about things they care about, and also discover topics they knew nothing about before.

One member recently stated, “This was our first time attending One Day University and we LOVED it!! I liked that I could learn about 3 entirely different subjects, from professors around the country, and still have part of my Saturday to play.”

Steven Schragis, the Co-Director of One Day University, had been considering building out his online division for some time. When they had to cancel all of their upcoming live events, his team worked around the clock to deliver the same exceptional programing virtually.

Now, members now access almost 200 already recorded events from around the world – and they’ll also have access to all of the upcoming live streamed events.

Of course, the nature of a top tier professor lecturing in front of everyone brings about a great communal sense, but now there is a charming twist: viewers will get a closer glimpse into the lives of these world-renowned academics as they broadcast from their living rooms and home offices! 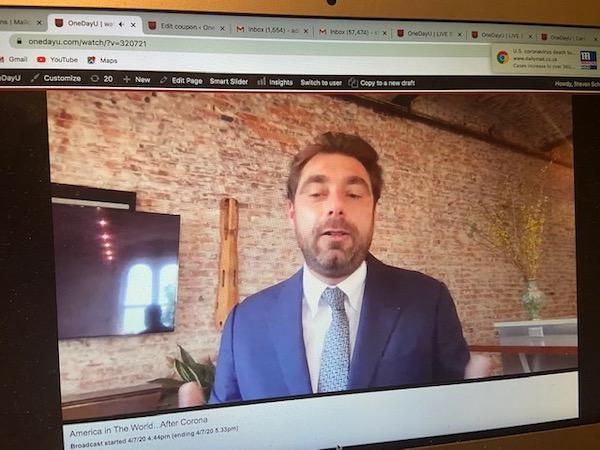 One Day U Co-Director Kevin Brennan stated  that converting everything to online was effortless as professors are now teaching from their homes. He stressed that his staff is exceptionally tech-savvy and were able to get their members up and running without issue.

As events all over the world have been cancelled and people are looking for ways to stay connected, learn, and enjoy their time at home, Schragis tells us that One Day University has partnered with newspapers around the country so that they can let their audience know about their new streaming services. As far as participation goes, Schragis said, “Well, we contacted 61 newspapers, and so far 60 out of 61 said, yes, we would like to help promote One Day University!”

You might find One Day University in publications such as the Los Angeles Times, Minneapolis
Star Tribune, and Connecticut Post, to name a few – offering readers a great deal, which we are also offering our readers today:

For only $7.95 per month, you will be able to view the entire library of recorded events, as well as have access to all of the upcoming events. There will be as many as five new videos posted each week, so you will have access to a great deal of new content. Click here to redeem this offer!

Members know it’s well worth the small fee to have access to a world of learning. One viewer said, “Fabulous day! Best speakers I’ve heard in a long time. Re-energized me.”

Some of the upcoming live-streamed events will include:

As mentioned above, you can look for mentions of One Day University in partnering newspapers including:

I highly recommend checking out this program; here is a link to access a deal so you can enjoy: https://www.onedayu.com/loveuws

Dance with Miss Rachel Comes to the Upper West Side