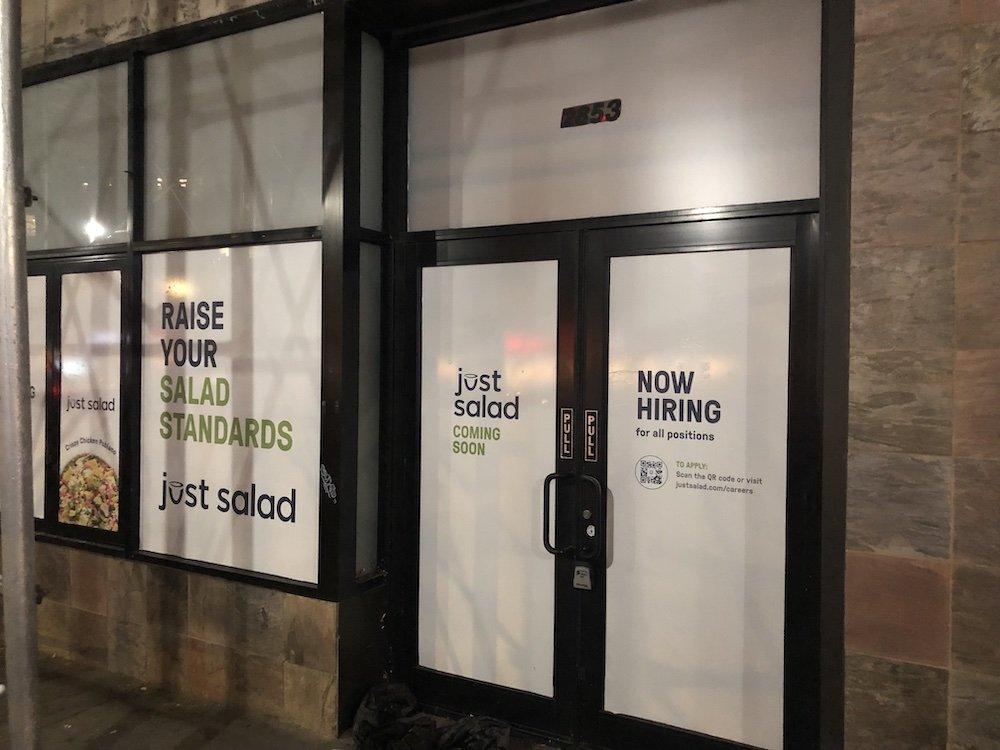 The eatery is famous for its MyBowl program where you spend $1 on a reusable bowl that earns you one free topping (avocados count) every time you bring it back for an in-store order. Just Salad’s website proudly states: “Every time you reuse, you’re reducing carbon emissions and waste—one salad at a time.” The MyBowl program has been around since Just Salad’s inception in 2006.

READ MORE: A New Pizza Place is Opening on the UWS. It’s a Pizza Hut.

Just Salad has been working on some plant-based substitutes for its menu lately. Mostly recently, Just Salad decided to swap out turkey bacon for Hooray Foods’ vegan bacon for its fall menu. “For many of our customers, animal welfare is an important consideration, so plant-based substitutes align with their values,” said Sandra Noonan, chief sustainability officer at Just Salad, in an interview with VegNews. “Additionally, reducing demand for industrial farmed animal protein, scaling appealing plant-based alternatives and promoting lower-emissions options are crucial for reducing the greenhouse gas emissions of the food system. Vegan bacon is currently featured in Just Salad’s Sweet Mama Salad which comes with baby spinach, white cheddar, sliced apples, honey maple walnuts and maple cider vinaigrette.

Anyone who’s familiar with the Too Good To Go app has probably noticed that the current Just Salad on Broadway has a listing for $5.99 for $18 worth of food. The goal of Too Good To Go is to cut down on food waste, so at the end of the day you can pick up a “surprise bag” of the leftover food Just Salad has that day at a discounted rate. It’s very possible the new location will offer this program as well.

Last week, Just Salad announced a new loyalty program named Race to Rewards. “The program allows users to participate in challenges that happen on a monthly basis and ‘complete the race’. Once the race is completed, the guest receives ‘Salad Bucks’ to spend on order discounts, freebies, ‘surprises and delights,’ and more,” reports Nation’s Restaurant News.