If you’re a parent, there’s a good chance you’re feeling overwhelmed right now. And for good reason—you’ve been given the nigh-impossible task of trying to simultaneously do your job, look after the house, and provide some kind of education to your kids who are fully aware that Something Is Not Right With The World. Even if you didn’t have a litany of personal worries (which, as a human being, you absolutely do), this is a recipe for a headache.

Before you wail in despair and run to lock yourself in the bathroom, though, let me suggest a solution that might 1) make your personal life a bit easier, and 2) actually capture your kids’ attention while still teaching them something useful.

That solution is: filmmaking. Your kids are already obsessed with TikToks, YouTube vlogs, and all manner of weird video content, so why not use their fascination to your advantage? It’s easier than you might expect, too—all they need is a smartphone and some household objects, and all you need is a Google Drive and a willingness to try something new.

Here are ten easy, engaging ways to add a dose of filmmaking to your remote curriculum:

1. Fun with Frames and Movement: Kids take three shots of themselves (close up, medium, and wide angle) doing the same action. These actions can tie into what they’re studying at school: for example, the movements can showcase an emotion of the Mood Meter. Once your kid is done, you can edit a short video using that footage and your kid’s favorite songs.

2. Inanimate Object Characters: Tell your kid to find an object in your home and create a character out of it, based on something they’ve studied at school. For example, a lightbulb could be Thomas Edison or a pea pod could be Gregor Mendel. Then, your kid can film a puppet show or create a brief animation with the object as their character.

3. Historical Interviews: Ask your kid to make a list of five questions that they would ask a person they are studying. Then, they can film themselves asking those questions. The next step is dressing up as the”interview subject” and filming the “answer” part of the interview. Finally, your kid can do a few simple edits (either with your help or on their own) to make it look like an interview.

4. B-Roll Scavenger Hunt: Kids search their homes, like explorers, to hunt for objects related to what they’re studying. For example, if they’re learning about three dimensional shapes in school, they could search for items shaped like cubes, pyramids, and spheres.

5. News Reports: Kids present a current event as a news reporter. They can create their own slides and film their own videos (or collect video footage from around the internet) to illustrate their story.

6. Documentaries: Kids write scripts about a topic they’re studying in school (like mammals, for example). Then, they record voiceovers and scrounge the internet for B-roll (or record their own) for a new take on informational essays.

7. School/Neighborhood Spirit Challenge: This one requires a little coordination with other parents, but it’s a lot of fun. Kids choose an object or action that represents their school or neighborhood. Then, they film themselves passing the object or doing that motion to the “next kid” who’s just off-screen. Once all the individual scenes have been filmed, they can be edited together to create a video chain reaction.

8. Literature Storyboarding: Kids choose a scene from a book they are reading. Then, they can storyboard the scene out by drawing the shots and camera positions they would want to use if they were filming and and turn that scene into a comic strip.

9. Personal Vlogging: Kids take a few minutes every day to record their thoughts, whether about a specific topic they’re studying in school (like the colonization of North America) or general musings on their feelings right now. Each “entry” can be compiled into a personal reflection journal.

10. Paper Animation: Kids collect cutouts of photos and drawings, then film themselves arranging those images in a sequence to create their own Public Service Announcement on a topic that they care about, like being kind to animals or helping their friends. 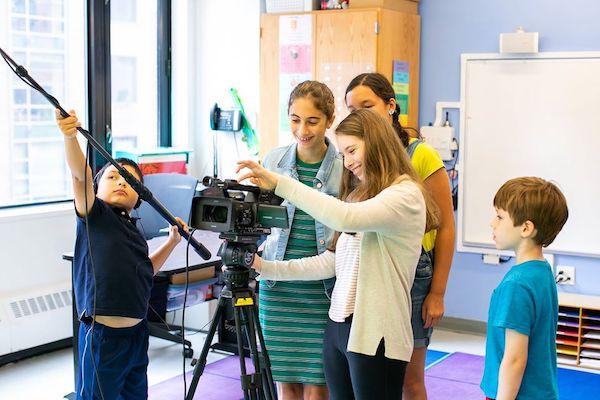