Kefi has opened its new restaurant at 222 West 79th Street (which was previously occupied by Fishtag, run by the same chef, also looking for a new location). This was actually the restaurant’s original location, when they first opened in 2007.

Kefi’s storefront at 505 Columbus was closed in early June.

Chef Michael Psilakis previously had a partnership for Kefi’s Columbus Ave location, but he will be running the 79th Street restaurant himself.

The Greek restaurant has been an Upper West Side staple since it opened.

Kefi is now open for dinner, with brunch and lunch launching soon. 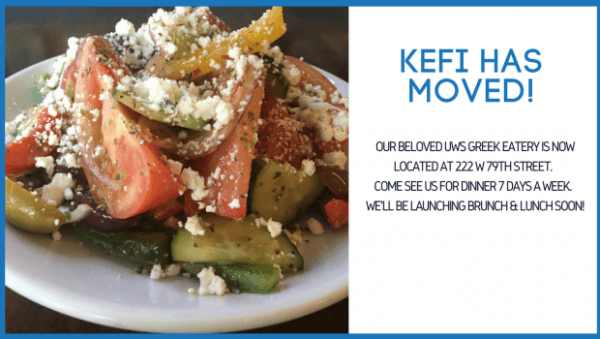 Sign up for our newsletter for more about Upper West Side restaurants!

Nobody Told Me – A New Cocktail Bar + Unique Eatery