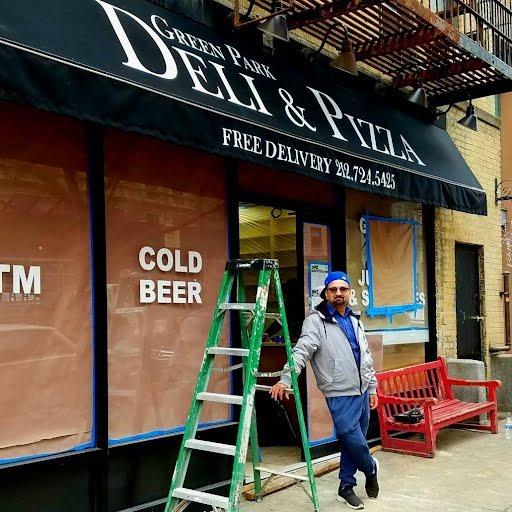 Green Park Deli and Pizza owner Parvinder Singh says he’ll be opening in about two weeks with new offerings such as pizza, a salad bar, and smoothies. Photo by Lee Uehara.

Armed with a new lease and a new pizza oven, the owner of the Green Park Deli and Pizza at 102 West 79th Street is pivoting from the standard deli and grocery joint it was a few months ago.

“Do you know a good pizza maker?” Parvinder Singh, 48, jokingly asked. “The cleaners in the space next door is gone, so we’re expanding to two stores to make one store,” Parvinder Singh, 48, shared, adding that he’ll soon offer pizza for the first time once the gas line is installed. He has owned the store since 2003, but Singh said it was started by his cousin in 1992.

In about two weeks Green Park will open with new additions such as hot slices, a salad bar, a juice bar, and smoothies.

“People get groceries from Fresh Direct and so many other companies. So that’s why we’re changing … this is the trend right now. People want fresh juice and a salad bar,” Singh said. And the pizza won’t hurt.

Singh, or “Doctor,” as some customers call him, says that his new business will have more space and a big kitchen, enabling him to hire more people to work, such as one or two more to work behind the deli and salad bar, and an additional cashier.

“I’m very excited. I hope I have very good business after this,” Singh said. “The pandemic time was a very, very bad time. We closed my store for almost five months. And the first day, just made $100 when we came back … so maybe the decision to grow and expand may be a good one, I hope.”

Singh says he misses his other store that used to be on Columbus Avenue between West 77th and 78th streets. He said it was a nice, small store with a nice deli, but that he lost the lease due to a rent hike about three years ago.

A little known fact that makes Green Park special, Singh says, is that he serves many Indian taxi drivers who stop in for, among other things, his chai and Indian sandwiches. “I come from India and I make Indian sandwiches. They like spicy sandwiches — a lot of jalapeños and onions, Indian style.” Singh says mostly, though, that taxi drivers come for his chai because he has milk steamers to make it extra delicious.

“We have cardamom, and we put it inside the chai, and the smell is very good and that’s why they like to come into the store.” But, Singh says, he’ll serve chai to anyone who asks for it.

Singh says that his Green Park Deli and Pizza is expected to open in two weeks, will offer delivery via GrubHub, and that he is working on a new website for the shop.

Singh says he wants people to know that he loves the neighborhood — and his customers, including one of his regulars, Billie Jean King.

“She’s my very good customer,” Singh said. “She orders a turkey sandwich on rye … sometimes with Swiss cheese.” Perhaps Billie will try a slice or a smoothie next time.