Signage is up for a new Le Pain Quotidien at 2161 Broadway on the corner of 76th Street, formerly home to Maison Kayser. Thanks to @sweet_domicile on Instagram for the tip + photo! 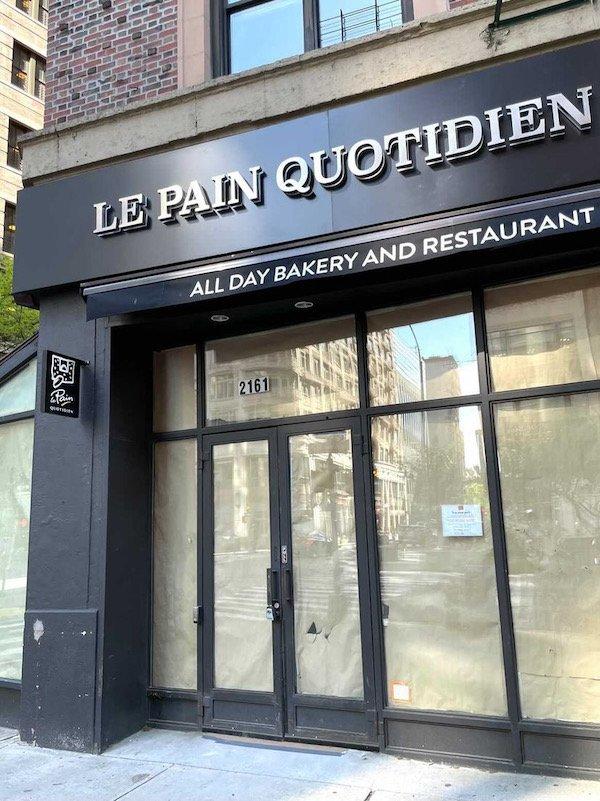 It was first reported in March 2020 that the bakery and cafe would be closing 12 of its NYC stores, though there was a bit of confusion as to why.

In April 2020, it was established that the closings were not COVID related, and that the company had been planning a consolidation well before the pandemic began. It was then discovered that LPQ had fired all 2,000 of its US restaurant employees in late March 2020.

According to the NY Post, workers had been told just one week prior that they’d be paid for sick and vacation days, retaining health insurance benefits through April. Employees also stated that the restaurant chain failed to protect them from the virus, not informing them about confirmed cases. And then cutting off their health benefits.

It turns out that LPQ was purchased by a company called Aurify, an operator of fast-casual food chains, which also acquired Maison Kayser.

In July 2020, LPQ reopened one of its Upper West Side locations, located at 60 West 65th Street.

We’ll provide an update once we know when the location on 76th and Broadway will be opening (and if we hear that other former LPQ locations are reopening).

NEW & COMING SOON TO THE UPPER WEST SIDE