New York City is one of the biggest film industry capitals and is full of iconic film history moments. It’s almost impossible to look at a movie set in the city and not recognize a familiar street or restaurant. The Upper West Side also has its fair share of famous film locations. Perhaps it’s the beautiful tree-lined streets and gorgeous pre-war brownstones that no Hollywood set can dare match. Here are some of the most iconic movies filmed on the Upper West Side!

“Tonight, tonight, it all began tonight.” West Side Story is a retake on Shakespeare’s Romeo and Juliet that begins one fateful evening. However, this tragedy is not set in Verona, Italy, but on 68th between West End and Amsterdam Avenues, which is now occupied by Lincoln Towers. Back then, the neighborhood was cleared out for an urban renewal project for Lincoln Center. Two star-crossed lovers played by Natalie Wood and Richard Beymer find themselves amid a deadly rivalry between the Jets, an American gang, and the Sharks, a Puerto Rican gang.

Based on Ira Levin’s book of the same name, Roman Polanski directs Mia Farrow as the unfortunate protagonist, Rosemary, who lives at the Bramford. The building is actually The Dakota, located at 1 West 72nd Street. Its daunting façade adds to the eerie mystery and tension of the strange things that happen to Rosemary at The Bramford.

If there’s something strange in your neighborhood, who ya gonna call? Ghostbusters, directed by Ivan Reitman, follows four parapsychologists (played by Bill Murray, Dan Aykroyd, Harold Ramis, and Rick Moranis) who start an eccentric ghost-busting business in New York City.

During the climactic scene between the Ghostbusters and the Soft Puft Marshmallow Man, the evil marshmallow tramples on an Upper West Side landmark, The Holy Trinity Lutheran Church (3 West 65th Street), prompting Murray’s character to declare, “Nobody steps on a church in my town!”

Of course, next to the church is 55 Central Park West, commonly known as “The Ghostbusters Building” and “Spook Central”, as this was where the fictional home of their first client, cellist Dana Barrett (Sigourney Weaver). This building was also where Ghostbusters ultimately destroyed the Stay Puft Marshmallow Man. 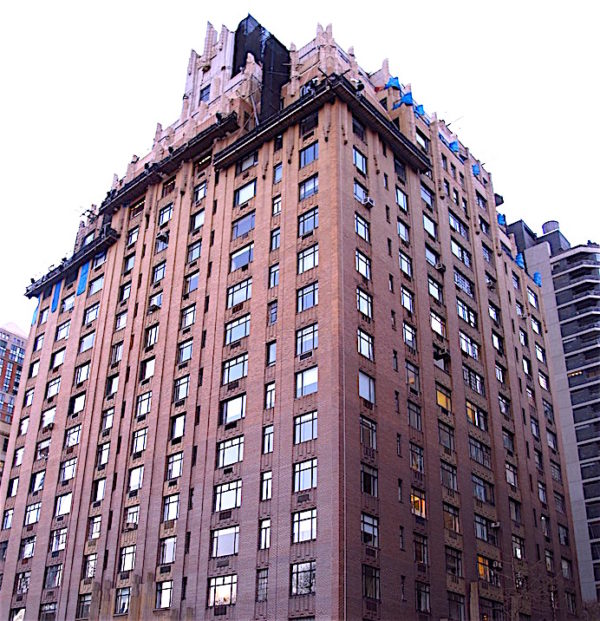 The movie follows the title characters played by Billy Crystal and Meg Ryan, and the twelve years of chance encounters to eventual friendship across New York City, including the Upper West Side:

The PlantShed (209 West 96th Street) is where Harry and Sally buy a Christmas tree, but after an unfortunate night, Sally struggles to drag her tree home a year later.

Café Luxembourg (200 W 70th Street): Harry and Sally try to set each other up with their friends, Jess (Bruno Kirby) and Marie (Carrie Fisher), with some French comfort food at Café Luxembourg. The café, which is still considered one of the best restaurants in town, causes Marie to remark, “Restaurants are to people in the ’80s what theater was to people in the ’60s.” Not only is this sentiment true to this day, but this was written by Jess, who ends up falling for her instead of Sally.

West 89th Street: After that disastrous yet oddly successful setup, Harry and Sally are seen in Jess and Marie’s new place as they try to figure out whether the wagon wheel table has a place in their beautiful Upper West Side apartment. (Spoiler alert: it doesn’t.)

Director Nora Ephron reunites Tom Hanks and Meg Ryan after Sleepless in Seattle for the modern retelling of Ernst Lubitsch’s 1940 film, The Shop Around the Corner, which also inspired the name of the fictional mom and pop bookstore featured in You’ve Got Mail.

Ephron was also an Upper West Sider, and many consider this film to be her love letter to the neighborhood. She featured many restaurants and parks including:

Verdi Square (72nd / 73rd on Broadway): Even though they chat regularly online, Joe Fox (Tom Hanks) and Kathleen Kelly (Meg Ryan) have yet to meet IRL (in real life). This scene shows them almost crossing paths at the beginning of the movie on their way to their bookstores.

Café Lalo (201 West 83rd Street): This charming café was where Shopgirl (Kathleen) and NY152 (Joe) were supposed to meet face-to-face finally. Unfortunately, when Joe discovers she’s his business rival, he hijacks his own date and makes Kathleen feel stood up. To this day, the café proudly displays several photographs of this scene on their window, drawing passersby in.

Zabar’s (2245 Broadway): In an attempt to avoid Joe, Kathleen ends up in the (gasp) cash-only line at Zabar’s. Unfortunately for her, Rose the cashier (played by “Grey’s Anatomy” star and Tony Award winner Sara Ramirez), refuses to swipe her credit card. Much to Kathleen’s dismay, Joe steps in to help out in this hilarious scene.

The 91st Street Garden in Riverside Park: What better way to stage The Big Reveal than with the beautiful flourishing garden at 91st Street? Add Harry Nilsson’s rendition of Somewhere Over the Rainbow to the mix, and Nora Ephron will make you believe in finding love in the unlikeliest of places and people.

… And this forgotten Upper West Side establishment.

Kevin McCallister (Macaulay Culkin) is home alone again, but this time in the Big Apple. While we’re all familiar (and envious) of Kevin’s decked-out Plaza suite, it’s the Upper West Side brownstone that’s another literal scene-stealer in this sequel.

After running away from the Plaza, he visits his Uncle Rob’s apartment at 51 West 95th Street only to find it deserted and under major renovation. Only a clever kid like Kevin can turn this dilapidated building into a house of hilarious horrors against the newly escaped Sticky Bandits, Harry (Joe Pesci) and Marv (Daniel Stern).

As he’s escaping, Kevin lights up the night sky with fireworks along 95th Street and Central Park to alert the police about the Sticky Bandits whereabouts.

Darren Aronofsky’s psychological thriller takes place in one of the most famous theaters of all, Lincoln Center, which becomes Nina (Natalie Portman)’s second home. Although the final act in Swan Lake was not filmed onstage, we still see the young ballerina walk up the steps of Lincoln Center to physically, emotionally, and psychologically prepare herself for her dual roles as Odette and Odile.

Whether your preferred genre is a comedy, romance, or thriller, the Upper West Side serves as the perfect backdrop for these films. The best part is that most of these UWS locations are still around, waiting for you to visit in person or onscreen too.