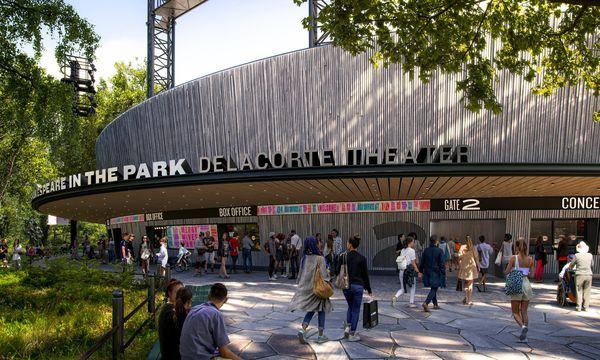 The Public Theater, in partnership with Central Park Conservancy and the NYC Parks, has unveiled its plans for a much-needed revitalization of the 59-year-old Delacorte Theater in Central Park. The proposal will now move through a robust public engagement process with local Community Boards, the Landmarks Preservation Commission, and other stakeholders.


With more than six decades of operation, including the recent staging of the widely-acclaimed performances of Merry Wives, Much Ado About Nothing, Hercules and Twelfth Night, and more than five million tickets given away, Shakespeare in the Park is one of New York City’s most iconic cultural experiences.

However, the theater has outlasted its current facility in almost every measurable way. The renovation of The Delacorte is not optional: the deteriorating structure is in dire need of rebuilding to provide upgraded and more comfortable conditions for staff, artists and audiences alike. It lacks modern back-of-house theatrical operations and does not ensure equitable access for those living with disabilities.

The Public first announced its plans to renovate in 2018, and since then has toured hundreds of people through the theater including local residents, community board members, Public supporters, volunteer Central Park gardeners, historic preservation groups, public school teachers, teaching artists, and others to share the current state of the facility and the goals of its proposed project.

Over the last several years, the Public worked with park stakeholders and design experts to closely study the potential impact of construction on the surrounding natural environment and arrived at a plan which will take great care to protect it. Central Park is not only crucial to the experience of Shakespeare in the Park; it is the backdrop that inspires its actors and captivates its audiences.

Built in 1962, the theater has not undergone meaningful capital upgrades since 1999. The design comprehensively addresses the theater’s code and life safety needs, makes core improvements to  infrastructure and backstage efficiency, and makes substantial upgrades to support its theatrical program. The design is also contextual and maintains The Delacorte’s current form, footprint and views within the park while protecting the sanctity of the theater in the park experience.

The Public is also in conversations with the City Parks Department to improve and expand the comfort stations which serve as the theater’s restrooms during performances.

The project team will prioritize diverse hiring as it invests in New York’s cultural infrastructure post-pandemic. It has committed to exceeding the City and State’s minimum requirements for contracting Minority and Women-owned Business Enterprises and Locally-based Business Enterprises (MWBEs and LBEs), including at least 40% MWBE/LBE subcontracting and 30% construction participation from underserved communities, in keeping with The Public’s anti-racism and cultural transformation plan.

The project is designed by Ennead Architects, which also oversaw the revitalization of the facade and public spaces at the Public’s flagship location on Lafayette Street in 2012 and the recent renovation of the Rehearsal Annex, part of a five-phase master plan for The Public Theater. Ennead has led many other marquee cultural revitalization projects in New York, including the Brooklyn Museum entry pavilion and plaza, Jazz at Lincoln Center, Symphony Space, Zankel Hall at Carnegie Hall, and the Rose Center for Earth and Space at the American Museum of Natural History. This continued relationship is based on shared commitments to creating spaces that center radical welcome and equity.

The theater project is expected to cost $77 million, with $41 million contributed by the Mayor, City Council and Manhattan Borough President and the rest privately raised. Pending approvals, work is anticipated to start in fall of 2022.

Sun Worship on the Upper West Side

Upper West Side Dog Partners with The Grateful Dead