Upper West Side restaurants NY Brat Factory and Gyu-Kaku closed this week, although Gyu-Kaku should be reopening soon.

NY Brat Factory, located at 106th and Amsterdam Avenue, was a kosher grill and bar serving a wide range of pub food, with a focus on hot dogs, sausages, and burgers. This week, a New York City Marshal’s notice of eviction was posted on its door, noting that the restaurant had 14 days to vacate the storefront. 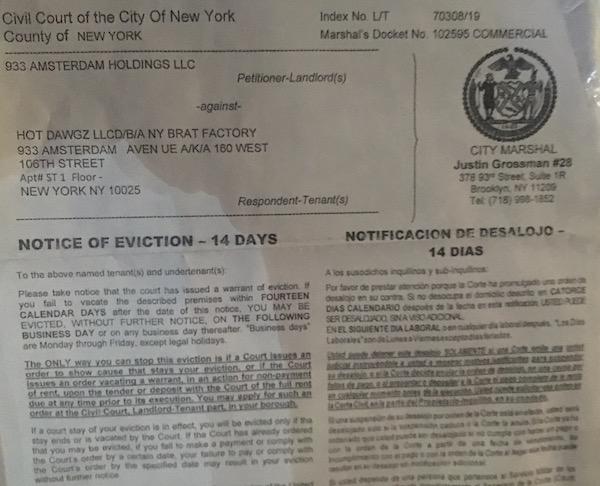 A representative from the Marshal’s office told us that the closure was a non-payment related case and that the tenants would have to vacate by January 29th.  NY Brat Factory’s answering machine states, “due to a water leak in our basement, we will be closed until further notice.” It is unclear if the water leak is related to the notice of eviction. Further attempts to contact the restaurant’s owners were unsuccessful.

NY Brat Factory opened on May 23rd, 2016, and began serving kosher meats, sandwiches, and desserts to the Upper West Side and Columbia communities. It prided itself on quality, house-made sausages and hot dogs, fulfilling a niche that can be otherwise hard to find. The restaurant also offered New York deli staples, including corned beef, pastrami, and brisket. While reviews were mixed across various platforms, NY Brat Factory appeared to receive positive online feedback, with customers appreciating the entirely house-made food.

South from NY Brat Factory on Amsterdam Avenue and 90th Street, Gyu-Kaku has been closed this week. The Japanese barbeque restaurant just opened in mid-December after months of anticipation. The restaurant’s website states that “due to maintenance,” they will be closed until Friday, January 17th.  While there is no indication that the restaurant will remain closed beyond Friday, a reader tipped us off that the closure was a result of “horrible odors from the tables.” Our efforts to contact Gyu-Kaku for comment were unsuccessful, but by Friday we will know whether the restaurant has reopened on time.

The Upper West Side Gyu-Kaku is one of the chain’s five locations in New York City, with dozens more across the country and around 600 restaurants in Japan. The restaurant is known for building a hot charcoal grill into the center of each table, allowing diners to cook meat and vegetables themselves. The extensive menu includes appetizers and soups but focuses on a wide range of beef, pork, and seafood for the grill. A recent visit from I Love the Upper West Side found the food to be great and the personal grill to be lots of fun (with some help from the waiters). Gyu-Kaku also has happy hour deals across the menu.

Get the UWS newsletter for more food news: