The Hudson River shoreline is perhaps the best example that New York City is a living, evolving entity. Over the last 400 years, the Upper West Side’s riverbank has been an untamed wilderness, a busy shipyard, and a sprawling park.

Tucked in the midst of these changes is the little-known story of New York’s oldest yacht clubs. Beginning in the mid-1800s, these clubs gave the city’s sailing and boating enthusiasts a place to gather, dock their boats, and compete in regattas.

By the time yacht clubs came into fashion, the bank of the Hudson south of Midtown was too developed to be used for recreational boating. The natural beauty of the Upper West Side’s shoreline drew club founders to present day Riverside Park. The West Side Line railroad had been built along the river in 1846 and twenty years later, the first plans for a park were proposed. Beginning in the 1870s, Central Park designers Frederick Law Olmsted and Calvert Vaux began work on Riverside Park and Riverside Drive. The park stretched from 72nd Street to 125th Street, although it would later be extended further north.

At the same time, New York’s earliest yacht clubs were searching for a home and decided that the Riverside area would serve all their needs. The Columbia Yacht Club was founded in 1867 and was originally located at the Hudson end of 57th Street. The growth of the Midtown shoreline and the beauty of Riverside prompted the club to move to the foot of West 86th Street in 1874.

By 1888, the club had grown to a membership of 124 and continued to develop its Hudson River clubhouse. An elevated walkway allowed members to safely cross the West Side Line’s railroad tracks and because most of the Hudson’s industry stopped at 79th Street, the clubhouse survived untouched into the 20th century. 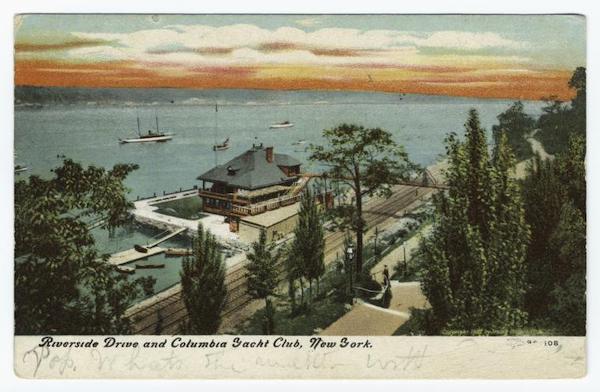 The same year as the Columbia Yacht Club’s move to 86th Street, the Hudson River Yacht Club built its first location on the water at West 70th Street. In 1880, the association moved to a two-story clubhouse at the foot of West 74th Street.

The club enjoyed its location alongside the new Riverside Park but less than 10 years later, change was in the air again. Commercial shipping docks were slowly creeping north and by 1890, took over the western shore of Manhattan up to 79th Street. Remnants of the docks and rail yard can still be seen today. For the Hudson River Yacht Club, the river-based industry meant another move. A new clubhouse was built at the foot of West 92nd Street. 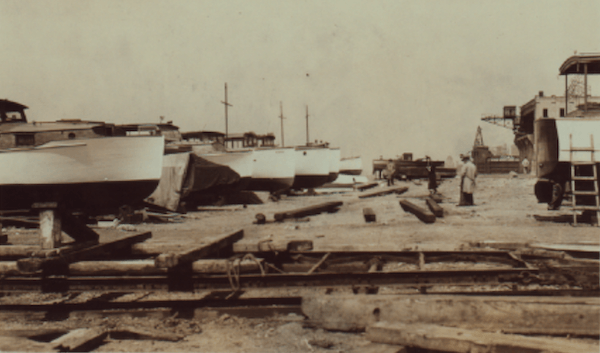 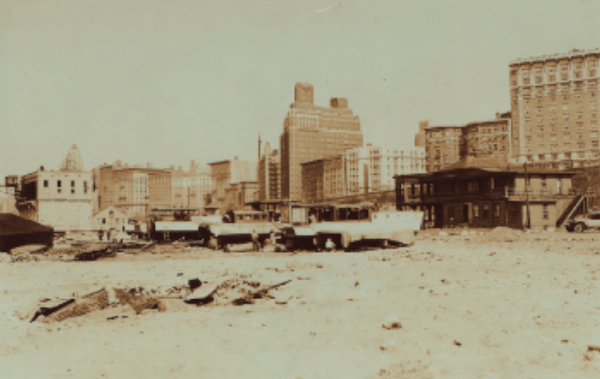 During this time, other yacht clubs also dotted the Hudson’s shore. In 1910, records show that the Colonial Yacht Club was located at West 138th Street. By 1928, it had a second location at West 77th Street. At that time, the historic New York Yacht Club had a clubhouse at West 86th Street, sharing the location with the Columbia Yacht Club. The New York Yacht Club’s main clubhouse was inland at West 44th Street in Midtown, where it remains today. 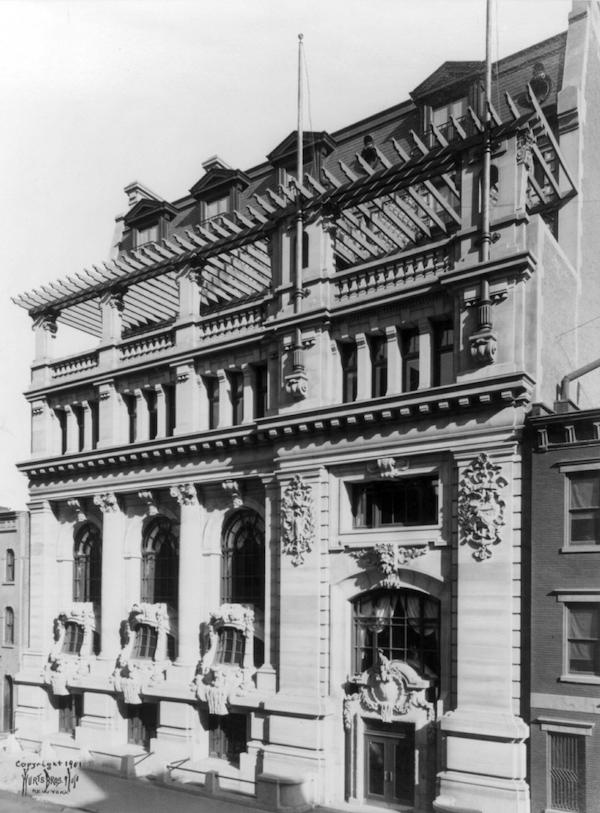 1934 abruptly brought the end of the Upper West Side’s yacht club scene. Parks commissioner and city architect Robert Moses set his sights on Riverside Park. Funded by Depression-era WPA money, Moses embarked on a project to revamp the park, bury the railway and build the West Side Highway.

Moses’ plan cost twice as much as the Hoover Dam and also cost the yacht clubs their home. The nomadic Hudson River Yacht Club moved onto a barge at 145th Street before being officially banished from the West Side. In the 1950s, the club finally found a permanent home off of Jamaica Bay in Brooklyn, where it still exists today. Robert Moses’ “West Side Improvement Project” marked the end for the Columbia and Colonial yacht clubs and their clubhouses. Today, however, a visit to the 79th Street Boat Basin can give you a taste of the boating culture that was once prevalent along Riverside Park’s shoreline.